Side B: Let's Fly with Flight B1A4 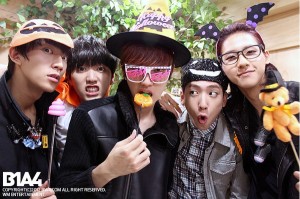 It’s time for another Side B, this time featuring B1A4, who recently made a comeback with their third mini album, In the Wind.

B1A4 debuted in April 2011 from the unknown company of WM Entertainment with the high energy song “O.K.” and mini album Let’s Fly. Their group’s name comes from the members’ blood types — Baro is the lone B type while CNU, Jinyoung, Sandeul, and Gongchan are all type A — as well as the phrase “Be the one, All for one.” It’s one of the more stable names as far as they go in K-pop.

Prior to debut, the group was introduced through a manhwa story, establishing that the group would be an addition to the many “flower boys” within K-pop. Since then, B1A4’s image has been of the energetic pretty boys that make some bizarre concepts — cue “Beautiful Target” and their sprout dance — look fun and engaging. After releasing an additional mini album, It B1A4, in 2011, the group managed to nab awards for Best Newcomer at the 26th Golden Disk Awards, 21st Seoul Music Awards, and 2011 Gaon Chart Awards (held in 2012), among others. 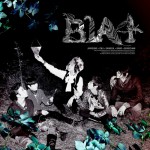 2012 has seen the group release its first full length album, Ignition, first repackage, as well as the above mentioned third mini album. The boys have also brought on a more mature image with “Baby I’m Sorry,” the almost unbelievable cheating from cheery “Baby Good Night,” and the calmer “Tried to Walk.” “Baby Good Night” from the repackaged album brought the group their highest rank on a music show by far: #4 on Mnet M! Countdown.

B1A4’s B-sides tend to be less explosive than their title tracks, rather, they often opt for a more collected sound. They’re a group with whom you can really hear their growth with each release. They’ve also consistently had input into their albums, starting with leader Jinyoung’s songwriting involvement with track, “Bling Girl.” In addition, beginning with “Baby I’m Sorry,” the group has been promoting title tracks entirely composed and written by the members themselves, which is an interesting development, especially for a rookie group. They’re also poised to hold their first concert, BABA B1A4, in December for about 10,000 fans. In other related news, three members — CNU, Sandeul, and Baro — have been part of the fixed cast for Immortal Song 2 and the guys recently won a round for the first time, beating Lee Ki-chan with 322 points. They were later defeated by Hwayobi, but garnering the win is still impressive in itself!

Now let’s get started with the tracks!

If “O.K.” was an abundance of energy and pure joy at being on stage, then “Remember” is the cooler cousin that is unafraid to admit vulnerability. With the hook of “I’m missing you. Do you remember me,” the song is one that easily gets stuck in your head, especially if you try to imitate the beginning. It also shows the potential of the group as vocalists that work really well together: their lines tend to interweave. Rather than each member having a chunk of the song, there are shorter snippets that meld well together.

Standard subject aside, the song’s use of a laid back beat and brass to highlight the melody is a welcome change from the synth- and electronic-filled music of some of the group’s other songs. Sandeul really brings out the high point of the song with explosive vocals. Not that this really needs pointing out but this particular portion of the song has been a fitting reminder as to why he’s the main vocalist.

“This Time Is Over,” Ignition

A cut version was performed on the group’s comeback week for “Baby I’m Sorry,” and for good reason. It’s a song that cements the growth of the group with most members displaying greater range and abilities. The choice of orchestral background music leans the song towards a more dramatic ballad unsuited for choreography, but it’s still a pleasure to watch live. Ignition as a whole demonstrated greater maturity, but still a tune with a raw edge. If 2011 albums are likened to high school, then Ignition is the university equivalent: a range of emotions covering multiple extremes and time for experimentation.

Likening it to the review of “This Time Is Over”, Ignition as a whole, features quite the range. “Feeling” is upbeat and has an easy hook. The “dancing party time” of “Baby I’m Sorry” continues in “Feeling,” but it can’t top “Super Sonic” in terms of ridiculousness. The irony in some of B1A4’s tracks is just how cheerful they sound in comparison to their lyrics. “Feeling” is one of those tracks.

Though this unplugged version is on Ignition, the original track appeared in It B1A4. Nothing but guitar and vocals allow the vocal ability to really stand out for similar reasons to those of “Chu Chu Chu.” It’s a completely different spin on the song and a welcome one.

If we’re being realistic, In the Wind is easily B1A4’s best album. It has a newly-developed sophistication about it that the group’s previous albums had been lacking. With quieter elegance, “If…” is a track that loses the chaotic sounds of title tracks to leave behind more stream-lined music. And there’s just something about B1A4 and songs with sadder lyrics: they manage them as well as they do those ridiculously peppy concepts.

To end the B-sides on a sweeter note, we have a hint of a throwback to the past. It’s not a strong groove, but it doesn’t need to be. The song’s strength is in its mellow character. The track features Shina-E who is a frequent guest female vocalist of Humming Urban Stereo to the point where she’s been considered as part of the group.

Such growth within a group shouldn’t be unexpected, and it’s unfortunate that this is so for K-pop. Fortunately, B1A4 has grown to become a rather likeable group that consistently puts out personally composed music, and as such, they’ve found a way to maintain a distinct sound despite obvious changes in style and preference. In particular, this last mini album has left me in anticipation of the boys’ future projects.

I hope you’ve enjoyed checking out some of B1A4’s B-sides. Don’t forget to check out the other editions of Side B that Seoulbeats has to offer!