Actress Kim Hyo-jin was invited to the official opening of Bulgari Hotel and Residences in London, England not too long ago. While there, she was photographed for W Korea, wearing Vivienne Westwood, Bulgari, Jil Sander, and more. Hyo-jin has been acting since the late 90s, starring in a variety of films and TV shows. Her most recent productions have been Strangers 6, a Korean-Chinese-Japanese joint drama filmed last year, and Mumyeongin, a Korean-Japanese drama, which she is currently shooting. Hyo-jin has played controversial roles in the past, once starring as a lesbian character in the film Life is Peachy. 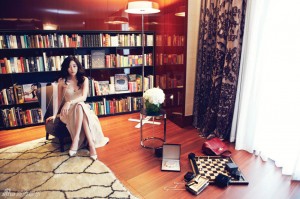 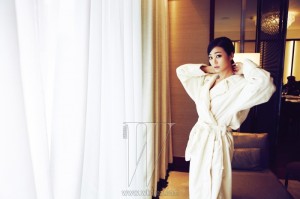 For the photo shoot, Hyo-jin played the role of a posh young society woman. She lounges about her upscale hotel room, wearing either a gown or a fluffy while bath robe. Because the goal of the photo shoot appears to advertise the hotel as much as promote Hyo-jin, the photography makes a lot of use of setting, doing long-range photos of Hyo-jin that capture much of the hotel as well. As a result, Hyo-jin resembles Holly Golightly, living a careless, decadent life in a hotel while strutting around in designer label clothing. She wears a nude dress in the upper left hand picture, her glamorous visage contrasting a little oddly with the nerdy background. The room looks like a study, not the sort of place a young socialite would be wearing an expensive gown. The next picture makes more sense. Here she stretches in her fluffy white bathrobe, looking gorgeous and comfortable in her hotel room. 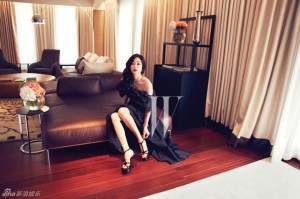 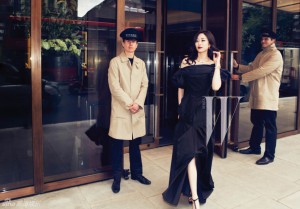 Hyo-jin wears the same black gown for two pictures. In one, she poses on a bronze sofa. This photo emphasizes the setting of the luxury hotel. The contemporary-style hotel is located in the heart of Knightsbridge and promises luxury and opulence for all its visitors. No doubt Hyo-jin’s photo shoot there was a way for the hotel to promote itself. In the next photo, Hyo-jin walks out of the hotel, leaving two doormen behind her as she tosses her black hair over one shoulder. Again, this image speaks of class and luxury, Hyo-jin strutting out of a guarded hotel in a black gown giving off the image of a wealthy socialite. 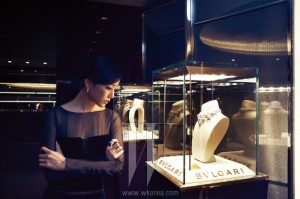 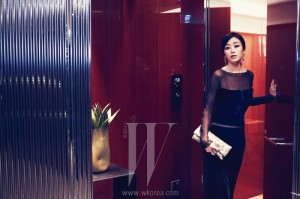 Hyo-jin wears black again for the final two photos of the photo shoot, but this new velvet dress has sheer shoulders and sleeves. Her previous dress was ruched and asymmetrical, plain in styling but overall flattering to Hyo-jin’s figure. Her velvet dress is tighter but also flattering. Instead of loose, her hair is pulled back into a ponytail. The sleeked-back pony is a little plain, a chignon or any other type of up-do might’ve been better. More jewelry would’ve benefited Hyo-jin’s look as well, because otherwise her outfit is rather plain. Nonetheless, she looks gorgeous. In these photos, Hyo-jin still promotes the hotel. In the first, “Bulgari” can clearly be seen in the jewelry showcase. In the second, Hyo-jin emerges from a doorway. This photo has two benefits: it highlights Hyo-jin’s figure and showcases the shiny furnishings of the hotel.

What do you think of Hyo-jin’s photo shoot?