The T-ara Bubble Bursts Yet Again

And this time, it’s pretty much an implosion.

It seems like not much time has passed since I wrote regarding the now 8-(9?) member T-ara‘s impending comeback with the single “Day By Day,” but within just a few short weeks, T-ara has become a 7-(8?) member group and now stands embroiled in controversy after the apparent ousting of member Hwa-young, who was added to the group as their seventh member only 20 months ago.

The controversy began a few days ago on social networking site Twitter, when a series of ambiguously passive-aggressive Tweets fueled netizen speculation that something with the group was amiss.  Following their first independent concerts in Budokan, Japan, members Eun-jung, Ji-yeon, So-yeon, and Hyo-min took to Twitter to express what appeared to be frustration at Hwa-young, whose recent leg injury prevented her from fully participating in the concert.  Hyo-min began by posting, “The difference in the level of one’s determination ^^ let’s all have more determination, fighting!”; the sentiment was echoed by all other members except Bo-ram, Qri, and new member Ah-reum.  Seemingly in response, Hwa-young tweeted, “Sometimes, even determination alone is not enough.  At times like these, I feel upset, but I believe that it is a blessing in disguise.  You know everything, right God?  Sigh.”  Even Hwa-young’s twin sister (and member of 5 Dolls) Hyo-young entered the fray in support of her sister.  Fans expressed disappointment in T-ara’s conduct, to the point where Core Contents Media CEO Kim Kwang-soo released a statement weakly offering that somehow, all of their Twitter accounts had been simultaneously hacked, and that there was nothing to worry about in terms of the relationship between the T-ara members.

But as it usually happens both in K-pop and in life, the slightest spark manages to explode into a fiery mountain of “he said, she said,” and it didn’t take long before netizens began hurling accusations of bullying at the original members of T-ara and producing evidence to support the idea that they made an intentional target out of Hwa-young.  Netizens even went so far as to demand Eun-jung’s removal from We Got Married and Five Fingers after uncovering an instance in which she apparently tried to choke Hwa-young with a large slice of rice cake.  In the midst of fervent speculation and rising tempers, it was revealed that Kim Kwang-soo would make (yet another) announcement regarding the group’s future on July 30 — which, of course, led to even more speculation about what was to come.  Rumors ranged from the likely (that there would be yet another fairly substantial change to T-ara’s line-up) to the dramatic (that T-ara as a group would cease to exist as a result of poor relations between the members).

And then finally, the ball dropped:

In response to the complaints by T-ara’s staff of 19 people (5 stylists, 7 hair & makeup, 5 on-site managers, 2 team managers), Hwayoung’s contract as an artist will be voided effective immediately with no conditions 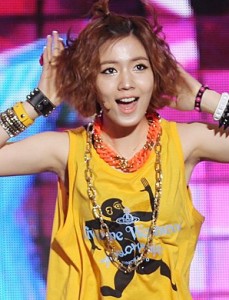 In other words: Hwa-young is out, but not because of any discord or bullying between the members; rather, the apparent discord stemmed from Hwa-young’s relationship with T-ara’s staff.  In a later statement, Kim Kwang-soo offered that Hwa-young’s conduct had often been unprofessional and detrimental to the group, citing her extremely last-minute decision to not perform on July 27th’s episode of KBS‘ Music Bank (which resulted in Eun-jung and Hyo-min having to hastily learn Hwa-young’s entire “Day By Day” rap portion, which in turn resulted in Hy0-min messing up during the actual performance) and a temper tantrum of sorts (in which Hwa-young threw down her crutches, sat on the floor, and threatened to yell at her managers in public).  Despite originally claiming that the inflammatory Tweets that started the whole mess were the result of a massive (and really, highly unlikely) hacking job, Kim emphasized that they had nothing to do with the ultimate decision to give Hwa-young the boot, reaffirming harmonious relations between all 8 (9?) members of the group.

Following the announcement, the rumor mill responded by churning out even more instances of T-ara’s original members bullying Hwa-young as well as more evidence that Hwa-young was responsible for creating disharmony and difficulty within the group.  A woman who claims to be a back-up dancer for T-ara stepped forward to tell a story in which Ji-yeon slapped Hwa-young after scolding her for screwing up choreography during an intense rehearsal for year-end performances (Kim Kwang-soo later denied that this story was true).  Another industry insider also attributed Ji-yeon’s poor attitude during a 2010 performance of “YaYaYa” to an argument that she had had with Hwa-young, who reportedly refused to listen to managers and fellow member Hyo-min when told to prepare for a stage performance.

Worse than the rumor mill, perhaps, has been the fan response.  As was the case with the unwarranted controversy surrounding Epik High’s Tablo and his degree from Stanford University, an online forum called T-Jinyo (We Demand the Truth From T-ara) has sprung up to, as the name suggests, demand that the full story behind Hwa-young’s departure be revealed.  As of this writing, the forum now has well over 160,000 members.  Additionally, an online petition calling for the disbandment of T-ara has accumulated over 71,700 signatures.  It has also been reported that a whole slew of concert tickets for T-ara’s upcoming showcase have been returned. 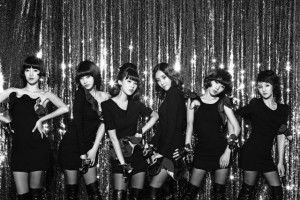 Though Hwa-young’s removal has essentially stun-gunned the K-pop community, CCM has argued that realistically, this move should not come as too much of a surprise; Kim even stated himself that this sort of line-up change was foreshadowed when it was revealed that T-ara would become a 9-member group.  The whole idea behind increasing the number of members would be to stimulate competition and potentially weed out those who don’t possess the determination (there’s that word again) and work ethic to make the cut.  By that logic, it almost seems as though Hwa-young’s untimely ousting was part and parcel of some larger plan.  However, that hasn’t quite stopped the incredible and seemingly interminable backlash that this latest move has had on T-ara — and the situation seems poised to only get worse.

It has been announced that T-ara will proceed with their August comeback as scheduled, but it seems as though virulent fan reactions to the news of Hwa-young’s departure will somehow impact this in a negative way.  Some have called for a delay in the group’s comeback until the dust has settled a bit.  For the time being, however, it seems that T-ara’s future is uncertain.

Stay with Seoulbeats for more on the T-ara/Hwa-young controversy, as it will be the topic of this week’s Roundtable discussion!