After School's Comeback is More a Premonition than a Flashback 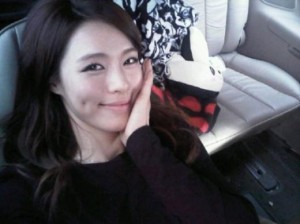 And like the movie, it’s not very good. Once the announcement that Kahi, After School‘s now former leader, would be graduating dropped, it finally hit me that the graduation system truly sucks. Despite being 30 years old and counting, Kahi is a force to be reckoned with on stage, a triple threat like no other. She’s a true diva in every sense of the word, and was the glue that held After School together, at least from my perspective. Although she has the talent to carry a solo career on her own, will After School be able to move on without her? Their songs have been declining in quality even before Kahi left, will it only get worse after the loss of both Kahi and Bekah, two of the strongest members of the group?

After listening and watching the first MV and single post-Kahi, my anwser would be yes. The MV opens with a shot of the words “After School” and “Flashback” against what seems like a door to a warehouse, but instead of lifting upwards, the door slides open to the girls, looking poised and ready for a photoshoot. And that is what this MV is all about, it’s basically a video of the girls on the set of a photo shoot for a magazine, laden with posing, baleful looks and strutting, as well as the random flashing lights. The set is divided into two parts: the warehouse and the inside of a Victorian house. 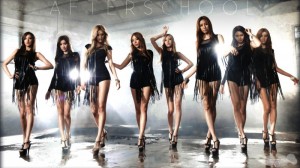 The Victorian house looked beautiful with the decor and wine-coloured walls, but the beauty of the set is completely off-set by the outfits the girls were wearing. Are those unitards, and tassels? They look like a cross between a go-go dancer and a cowgirl. The tassels gave me unwanted country vibes and should have never been used at all. Sure it might have been fun to watch the tassels twirl while the girls spun around, but they looked hideous on top of what the girls were wearing and should have been cut off immediately after the girls put on their outfits. Other than that, the lighting in the room made the girls’ clothes tolerable until the point where the clothes change from black to white and smoke appears from out of nowhere, making the girls look like their auras were showing.

While watching the smoke permeate and their clothes change to white, did anyone else get flashbacks–pun intended–of BoA‘s scene in DBSK’s “Tri-Angle” when she descended into the MV like an angel dressed in white clothing and the lighting made it look as if she was giving off this a weird, ghostly light? The same thing happened during this moment, but for absolutely no reason at all. Where did the smoke come from? Why were they glowing? What was the point of the costume change? Another random part of the MV was the guy tied up to a chair, stuck inside a cage no less. Was I the only one who had no idea of the purpose he had in the MV? They cut to shots of him, in between the girls “dancing” and their close-up shots. Other than Uee killing him off in cold blood, they didn’t really explain the purpose of him even being in the MV. Did he have anything to do with the flashback concept? Or was his only purpose to be killed by Uee for no reason whatsoever? The MV had absolutely no purpose or storyline whatsoever, and with a title like “Flashback,” they could have at least made it about, I don’t know, an actual flashback to a traumatic experience, like him and Uee being a part of the mafia or something and she had to kill him off because he knew too much. The rest of it being about her regret and recounting of what happened? That would have made for a decent MV–if I do say so myself–and would have at least brought some coherency and relevance to anything going on in this MV. If there had actually been a storyline, I would have forgiven the tassels, the ghostly glowing, and even the random dubstep scene in the cage, this MV has nothing but pure nonsense, and not even in a good, or funny way. 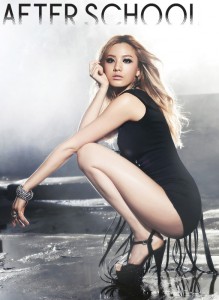 The girls aren’t looking too good in this MV, either. Besides the awkward clothing and lack of storyline, the other problem is the even more awkward choreography. After School isn’t known for their dancing, but the emphasis on squatting, posing, and strutting really felt tacky and boring; they could have at least made some effort in making a decent choreography that didn’t depend upon on the girls’ trying to act sexy. There is absolutely nothing wrong with trying to look sexy, but at least show some better choreography than just that. Some of the singing was terrible, especially at the beginning of the song. The use of club music and dubstep was tolerable, but a strange fit when they were dancing in the middle of a Victorian room. The cameraman seemed to be enamoured with Nana— I thought Uee was supposed to be the visual. The cinematography was all right, except for the annoying flashing lights and the scenes of them aimlessly walking. This is an MV, girls, not a photoshoot.

This MV and comeback song is nothing short of a disappointment. It’s pointless and random, and didn’t make any sense 99.9% of the time. It seemed like it was going to be a dramatic, artsy MV, with the black and white and Victorian-style rooms, but it really faltered and sputtered into being a mess. The song itself is as forgettable as the MV, which is really saddening seeing how much I did like their previous songs, like “Ah!” and “Because Of You,” which arguably had one of the best MVs I’ve ever watched in K-Pop. I even liked last year’s “Shampoo,” save for the MV. I’m not sure how they went from “Because of You” to “Flashback,” it’s utterly baffling to know that these two MVs could come from the same group. This may or may not be the result of Kahi leaving, but the coincidence is too strong.

That’s my opinion on After School’s comeback, what’s yours? Share them in the comments section below!