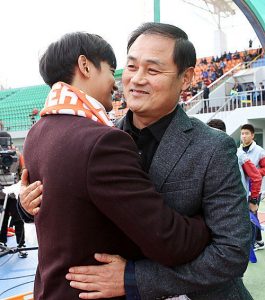 When Shinee‘s Minho was a kid he wanted to play soccer like his father, defender-turned-coach Choi Yun-kyum. Not wanting to see his son suffer the long training hours and abusive environment, he dissuaded a then-five-year-old Minho by threatening to kick him out. Though that seemed to have worked, I can only imagine what Choi Sr.’s reaction was when his younger son was street cast by SM and started on the road to idoldom, with its long training hours and abusive environment.

I guess you could say it worked out in the end, with Minho established as part of a successful K-pop act and building his acting career as well. Now, it is time for him to complete his military service and it comes as no surprise to Minho’s fans (AKA Flames) that he will be joining the Marines. 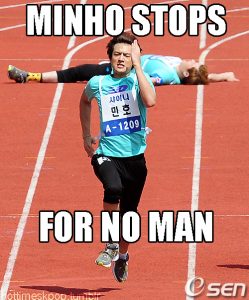 Considering Minho’s enduring love for sport and physical activity, it seems logical that he would apply for one of the toughest military roles available. I mean, have you seen him at ISAC? Moreso than that, Minho is someone who is constantly pushing himself to do more, and do better. It comes off as extra at times (again, ISAC), but the genuine enthusiasm and effort are there.

Even if the result is nowhere near the level of his peers, Minho is someone who will endeavour to do the best he can. I may have called him a black hole of musical talent in the past, but goddamn he has been a black hole that tries. And whatever your thoughts on the military in general, you have to admit that joining the Marines is peak Minho.

This peak Minho is also what we’ve been seeing in the lead up to the Shinee rapper’s enlistment, with fans being lavished with a fan meet tour and now, an actual solo single that really exists. SM’s Station was created for exactly this type of project: a special release from an idol who may not have the time or direction to carry a full album promotion.

The scenes become littered with telephones and alarm clocks, representing Minho’s ties to his personal and professional lives, respectively. He is almost haunted by these objects, being called out of tired slumber by two different types of rings. Then there is the ring box itself, representing a chance to choose a different path.

The MV ends with Minho running out of his business-trip suite, ring in hand, in a better-late-than-never moment, though this isn’t reflected in the song. The message of the lyrics are actually rather disheartening upon closer inspection — so, you feel lonely even with all your expensive baubles, but you don’t miss the other person (or, rather, the work needed to maintain a healthy relationship)? — but Minho sprinting “home” gives the MV a more romantic, if not necessarily hopeful, ending.

Another morally questionable choice was the use of a gentlemen’s club as a filming location. The State Room does seem to allow women for filming, at least. And it’s not like Minho and SM are politicians who have booked the place for an International Women’s Day event, a MV shoot isn’t that cringeworthy. At least the MV producers can be appreciated for their economic thinking: just about every scene not in the plane cabin is filmed at the club. You can even see the same black backdrop Minho runs past in the short lift scene that introduces the ring box.

Despite these hiccups, the song and MV do succeed at their main goals of giving Minho an opportunity to achieve a major K-pop milestone, showcasing both his singing as well as his signature rapping style, as well as give back to his fans. “I’m Home” was performed as part of the Best Choi’s Minho fanmeet tour, where the idol acquitted himself quite well. It is a shame that the studio version doesn’t allow Minho the same chance to go lower like other Shinee members have with their solos, but we get hints of it on stage (mainly to stay within a comfortable range, but I am still grateful).

Minho joins Marines training on the 15th and I admit that I am going to miss good ol’ Flaming Charisma. After so many years as a K-pop fan, I now join the ranks of those who have farewelled biases marching off to enlistment. And while I’m more likely to fondly remember his Taemin and Key dance covers/cosplay, here’s hoping that “I’m Home” is the first entry of more in his solo discography.