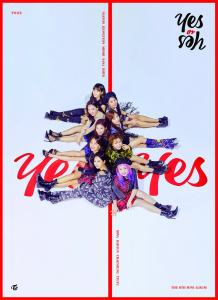 The members of Twice are notorious for acting cute in their songs. Some would even argue that the childlike cheers, innocent smiles and expert aegyo that take centre stage in the band’s music have helped them gain success and titles such as best-selling girl group ever in the Gaon chart.  Hence, it’s no surprise that Twice sticks to the status quo in the group’s 6th extended play Yes or Yes. However, the band’s focus on acting adorable saturates most of the album and this monotony overclouds the distinguishing features of the majority of the songs, leaving them easily forgotten.

The title track, also named “Yes or Yes”, doesn’t escape this unfortunate fate. The song is dynamic given that its strong, slow romantic verses, more up-tempo chorus, laid-back post-chorus, and pre-chorus vary greatly from each other. Even the bridge, which is quite weak as half of it is childlike chants, offers some variety. Nonetheless, most of the members’ voices are laced with cuteness in each section of the song. This was fine in previous title tracks such as “TT”, “Ooh Aah” or the divisive “Signal”, as Twice was still classified as a rookie group during these releases.  However, the cute concept has a dulling effect on the title track at this point in the band’s career, which makes “Yes or Yes” quite unremarkable as it just feels like one more song added to Twice’s familiar framework of acting cutesy. By the time you get to the next song, “Say You Love Me”, “Yes or Yes” seems like a distant memory. 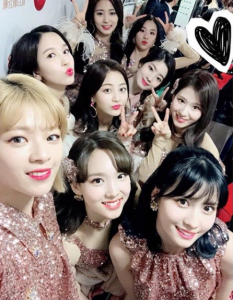 “Say You Love Me” and the two subsequent songs, “LaLaLa” and “Young &  Wild”, also leave a fleeting impression on the listener as they follow in the footsteps of the title track by prioritising conventions of cuteness, namely an infantile vocal tone and babyish chants. This is a shame because the last two songs contain interesting elements. The soothing harmonies in “LaLaLa”’s simple pre-chorus and cheerful chorus, and the jazzy piano chords, which carry the verses, are notable mentions.  Conversely, “Young & Wild” stands out for exploring the theme of having a carefree attitude, and mentions nothing about love, a topic most of the songs from Yes or Yes focus on:

We all have so many things to worry about in life

But you know… We are young & wild

Because there’s nothing stopping us

“Say You Love Me”, for instance, is about a girl’s wish for her lover to confess their love to her, whereas “Yes or Yes” explores a more unhealthy kind of “love” by focusing on a girl’s refusal to take no for an answer when seeking a relationship. This has caused some people to argue that the title track promotes a disregard of consent:

I respect your choice, but reject your rejection

You would think the fifth song in the EP “Sunset” would disappear uneventfully under the horizon and fade into oblivion because it continues exploring the theme of love. Nevertheless, in this song Twice ditch the infantile vocal chants and cute speak-singing for explosive arpeggios and animated synths, which zigzag between great vocals and resonant harmonies, easily making “Sunset” the most memorable song of the album. The perky and bouncy 80s vibe of the song could have led the band back to its cute concept, but Twice doesn’t take the bait here – instead, Nayeon, Mina, Jihyo and Jeongyeon get the opportunity to showcase their vocal talent, and are wonderfully supported by the singing voices of the rappers in the group (Chaeyeong, Dahyun, Sana, Momo and Tzuyu).

Despite its dullness, “After Moon” would have been a perfect end to the album. Its distinctness from the conventional Twice sound could have signified a change in Twice’s future releases, such as a focus on the band’s decent vocals, which are often overlooked as they take a backseat to cuteness. Instead, Yes or Yes concludes with the Korean version of “BDZ”, a sign that the band’s cute concept is not going anywhere anytime soon, even if it results in more albums lacking noteworthy songs.