Super Junior-D&E Are Victorious With "'Bout You" 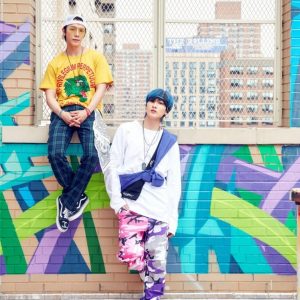 The busy year for K-pop veterans Super Junior continues with the return of beloved sub-unit Super Junior-D&E, both members of which are back safely from the military and have resumed their musical activities. While they had been consistently active in Japan, ‘Bout You comes as their 2nd Korean mini album release 4 years after their first mini-album, The Beat Goes On.  Fortunately (or unfortunately), ‘Bout You follows the trend of their previous album as it opens with a lacklustre and disappointing track–which also happens to be its title track!–but successfully redeems itself with the rest of its 7 tracks.

Right from its tropical opening riff, “‘Bout You” aims to be a trendy track for the summer. But it quickly falls short due to the overuse of autotune and electronic effects in the song, which reduce its light-heartedness and effectiveness. The song does pick up towards its end, however: there is a build-up in intensity lyrically, with a shift from merely admiring/pining after a girl to expressing a stronger insistence to being with her. This is complemented by an intensifying beat which stands out among the trap beats of the rest of the song, making this the most interesting part of the track.

Tell me that it’s time, tell me you wanna be with me
Even if I get hurt, it’s still you, it’s you

The album begins to pick up with “Rum Dee Dee”. Despite its purely rhythmic introduction, which causes the song to sound a little empty, it is very catchy as a whole. The lack of autotune and excessive electronic effects here was very welcome, and the clarity of both Donghae‘s and Eunhyuk‘s voices enabled me to better focus on their ad-libs and the way they comfortably played with the beat, which was notably more varied than in “‘Bout You”.

Like “Rum Dee Dee”, “Livin’ In” features a subtle introduction, but it works very well here because of how it literally matches the first line of the song, “From the moment I saw you, the noises from the whole world turned off”.  This song switches up the mood of the album a little with its slower pace, and the way both Donghae and Eunhyuk sing whole verses and choruses before alternating, a rarity among the songs of ‘Bout You. Both their voices are thus highlighted here and the song sounds like two individuals telling separate stories, adding a personal touch to this track. The bass stands out here as well as it is instrumental in keeping the song snappy and lively.

D&E delve deeper within with “I love it” and “EvanesceII”, both of which display more nuanced and emotive vocals, complete with on-point harmonization and vocal effects. In particular, Donghae and Eunhyuk belt out some sweet high notes in the latter; “EvanesceII” is of a higher register than any other song in the album. This track reinforces once again why this duo works so well together, as they show off a fantastic synergy here. It plays off their different strengths, highlighting the fuller and more melodic nature of Donghae’s voice, while emphasizing Eunhyuk’s sharper and more rhythmic one.

A greater variety of instrumentals including synth sounds and string instruments are used in “I love it”, and while they are mostly effective, the shift to a purely piano accompaniment towards the end of the song is a tad jarring. However, the build up in the verses and the change in rhythm in the choruses is well done, creating a very fun and feel-good song, which fits well with D&E’s cheerful vibe.

The album moves into new 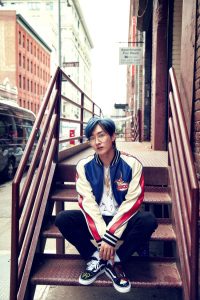 territory with “Lost” and “Illusion (Obsessed)”, Donghae’s and Eunhyuk’s solo songs respectively. In line with the experimental nature of the rest of the album, Eunhyuk went all out with “Illusion”. Beginning with a haunting melody riff and strong trap beats, Eunhyuk shows a darker side of himself here with his hard-hitting raps speaking about a person who is deluded into thinking he’s not obsessed with his girl. It is refreshing to see this persona in this album especially since he does not show it often when promoting as D&E, given that Donghae has a generally milder style and temperament. While Eunhyuk impresses with his raps, his vocals are a little lacking here and the build up at the end of the bridge falls flat.

On the other hand, Donghae veers onto the safe track with “Lost”, a classic band song which matches and showcases his stable vocals very well. His harmonisations and backing vocals in the chorus are a nice touch as well, along with the bits of rapping Donghae does for variation. The effortless way he switches styles in this track reflects his versatility and experience as a singer, making for a very easy track to listen to.

D&E end off this album on a literally victorious note, with “Victory”, a simple and uplifting song which would definitely sound beautiful when sung in a stadium full of fans. The instrumentation and backing vocals are full throughout the track, emphasizing the lyrics “you are definitely not alone”.

They claim “as always we are victorious” several times in the chorus of the song, and they certainly prove it with ‘Bout You. With the exception of their title track, D&E really lived up to expectations and I enjoyed how they experimented freely with several styles here, especially since they contributed creatively to most of the tracks. Their ease and comfort in handling the different genres stands out here and their years of hard work definitely paid off.