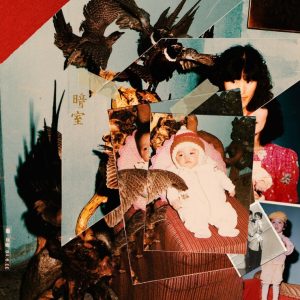 On June 15 earlier this year, Simon Dominic (also known as Simon D) released Darkroom: Roommates Only, his first full album since joining AOMG as co-CEO in 2014. Simon Dominic’s Darkroom is the fruition of a year of Instagram hiatus, 2 years of sporadic activities, and 3 years of no original music; Simon Dominic’s last single was “₩ and Only” featuring Jay Park in 2015.

Simon D announced the album a mere 6 hours prior to release on his Instagram and didn’t release any music videos alongside his album—save for a “Making Of” video of the album’s title song “Demolition Man”—until July 24th. Simon D revealed the live renditions of “Demolition Man” with Kim Jong-seo, and “Me No Jay Park” on July 24th and 25th respectively. He followed their release by re-releasing his album on July 29 with two new singles in addition to the original 8.

For fans and non-fans alike, Simon D’s long, unexplained hiatus inspired disconcertedness, dismay, and demanding comments on his label-mates’ social media. Neither AOMG nor its members made any announcements or answered any questions, which led fans to assume that perhaps Simon Dominic was busy managing AOMG, given Jay Park’s busy schedule.

Simon D puts all these rumours and assumptions to rest in Darkroom by explaining the simple yet sad reason behind his absence: depression. The name “Darkroom” works on multiple levels, as it is simultaneously the name of Simon D’s workroom, as well as a metaphor for depression. Thus, this album can be interpreted as stories that are a product from Simon D’s studio as well as his depression, both seemingly available to his “Roommates Only.”

In this Darkroom, Simon Dominic combines spare beats with underlying melodies that feature flute (“06076”), piano (“Winterlude ’17,” “Jung Jinchul”), electric guitar (“Bathtub”), trumpet (“Winterlude ’17”), and saxophone (“Demolition Man”) to tell stories about shame, sleeplessness, and self-loathing. Each song in Darkroom is a conversation, simultaneously between Simon D and himself, and Simon D and his roommate or listener, because as Simon D notes in the “Roommates Only,” only his  “roommates want to listen to this boring story”—nobody else cares.

Simon D introduces Darkroom with “Roommates Only,” a slow piano-tinged song which features a minute-long interlude before he begins rapping, or rather, weaving a story for the listener. He invites listeners to his workplace and sanctuary, “Darkroom,” to listen to his story, but choruses throughout the song asking if they really want to be his roommate:

My room is dark cuz I wanna be alone
I just have hidden myself for a long time
I’m lonely cuz I’m human, too, and I ask you
Do you really wanna be my roommate?

“Roommates only” transitions to “06076,” Simon D’s current zip code and tells the story of the house he is currently living in. The previous owner of the house bought two buildings before Simon D moved in, yet all he has, Simon D rues in the chorus, is a view of the Hangang river. The exact words he uses are “see the river view, ige dailppun.” The latter phrase is homophonous with “darkroom” and insinuates that even his own house is an uncomfortable place for him rather than a refuge.

In the first two songs of the album, Simon D switches between a low, nasally voice that he usually reserves for rapping and a thick, booming voice that echoes his speaking voice. This switch is intentional as the former represents the artist Simon Dominic while the latter represents the person Jung Kiseok (Simon D’s real name). Simon D invites the listener to his darkroom in “Roommates Only,” while Jung Kiseok cautions them if they really want to be his roommates. Simon D tells Jung Kiseok that he is “a dead body,” in “06076,” while Jung Kiseok playfully asks Simon D how he is doing and that he, Jung Kiseok, is becoming “bluesy” inside him. The rest of the album follows Jung Kiseok as he confesses to all the agony, anxiety, and angst plaguing him.

Simon D slows things down with “Winterlude ’17,”  a half rapped, half sung letter of sorts that chronicles his relationship with his ex-lover. As love-filled summer fades and fall comes, Simon D admits to being left “smiling, without [his] darling,” in the winter, over a soothing, serene piano instrumental. 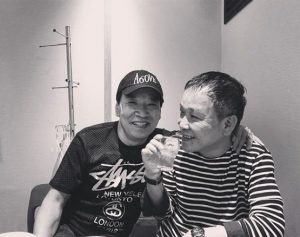 On the heels of “Winterlude ’17” comes “Jung Jinchul,” a song that juxtaposes Simon D’s soothing singing with deeply personal lyrics and a captivating, piano-accentuated beat to pay a heartbreaking homage to Simon D’s uncle who went missing when Simon D was a child. This heart-wrenching song created a heart-warming story, drawing attention from fans and netizens who ultimately reunited Simon D with his long-lost uncle.

“Demolition Man” is a nod to Simon D’s origins, as his stage name is a combination of Simon Phoenix, protagonist of the movie Demolition Man, and Simon D’s christened name, Dominic. “Demolition Man” sounds like Jung Kiseok having a one-way yell-sung confrontation with himself over a bare-bones beat. Simon D’s harsh voice contrasts well with Kim Jong-seo’s soft one to create a poignant and passionate confession of pain, self-loathing, and shame:

You lazy ass wake up
There were may times where I wanted to throw myself on the road the cars run
I keep fuckin’ saying “suicide, suicide”
But I’m the biggest coward in the world

The album takes an upward turn in the seventh and the most upbeat track of the album, “Home Shit Home,” featuring Jinbo the Superfreak and a heavy use of drums and synth. Simon D hasn’t found an end to his melancholy, but he has found a kindred soul he can share it with. This hopeful and upbeat vibe continues in “Ullah,” a song reminiscent of late 90’s hip-hop song with its slow, synth-based beat, where Simon D decides to work through his pain, release his album, and stop imprisoning himself.

“Me No Jay Park,” sees the return of Simon Dominic, who raps over a Gray-produced beat incorporated with stringed East Asian instruments to remind Jung Kiseok to work. “Me No Jay Park” is captivating due to its intoxicating beat, yet controversial. Simon D holds nothing back as he calls himself a “lazy son” compared to Jay Park, discloses that the reason behind his Show Me The Money appearance was to convince the public of his worthiness as a CEO, and ultimately resigns as co-CEO of AOMG because he doesn’t feel like he measures up to Jay Park, hence the song’s title:

Everyone, attention please
I’m about to make a big announcement
A gun to my head, lock & load, that’s what it feels like right now
It makes me cringe to hear ‘CEO’ now
It was just hard for me to keep up with Park’s speed
I’m writing my resignation right now, this song is it

Drum and synth-based “In My Hood” brings Darkroom to a close. The song’s repetitive chorus renders it the weakest song on the album. Yet, “In My Hood,” is a fitting song to end the album with as Simon D admits to moving out of his 07067 house, moving past “high scores and trophies,” moving away with friends who only care about his money, and moving forward with his life. 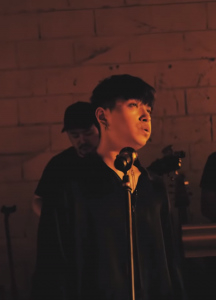 Simon Dominic’s Darkroom: Roommates Only is a clear, cohesive, and compelling masterpiece of an album that tells the honest and heartbreaking story of his struggle with depression. Like any good story, Darkroom has a clear setting mentioned in “Roommates Only,” has an interesting main character with obstacles in his way which are listed continuously throughout the album, has conflict that is skillfully built-up and revealed in “Demolition Man” and “Me No Jay Park,” and a resolution which results in character development, illustrated in “Ullah” and “In My Hood.”

Though Simon Dominic reveals many of his insecurities and anxieties in the album, nowhere on the album does he sound unsure or awkward. Every melody, every beat, every lyric, save the chorus of “In My Hood,” have been analysed to create a well-produced and well-written album that would be a shame to limit to roommates only.