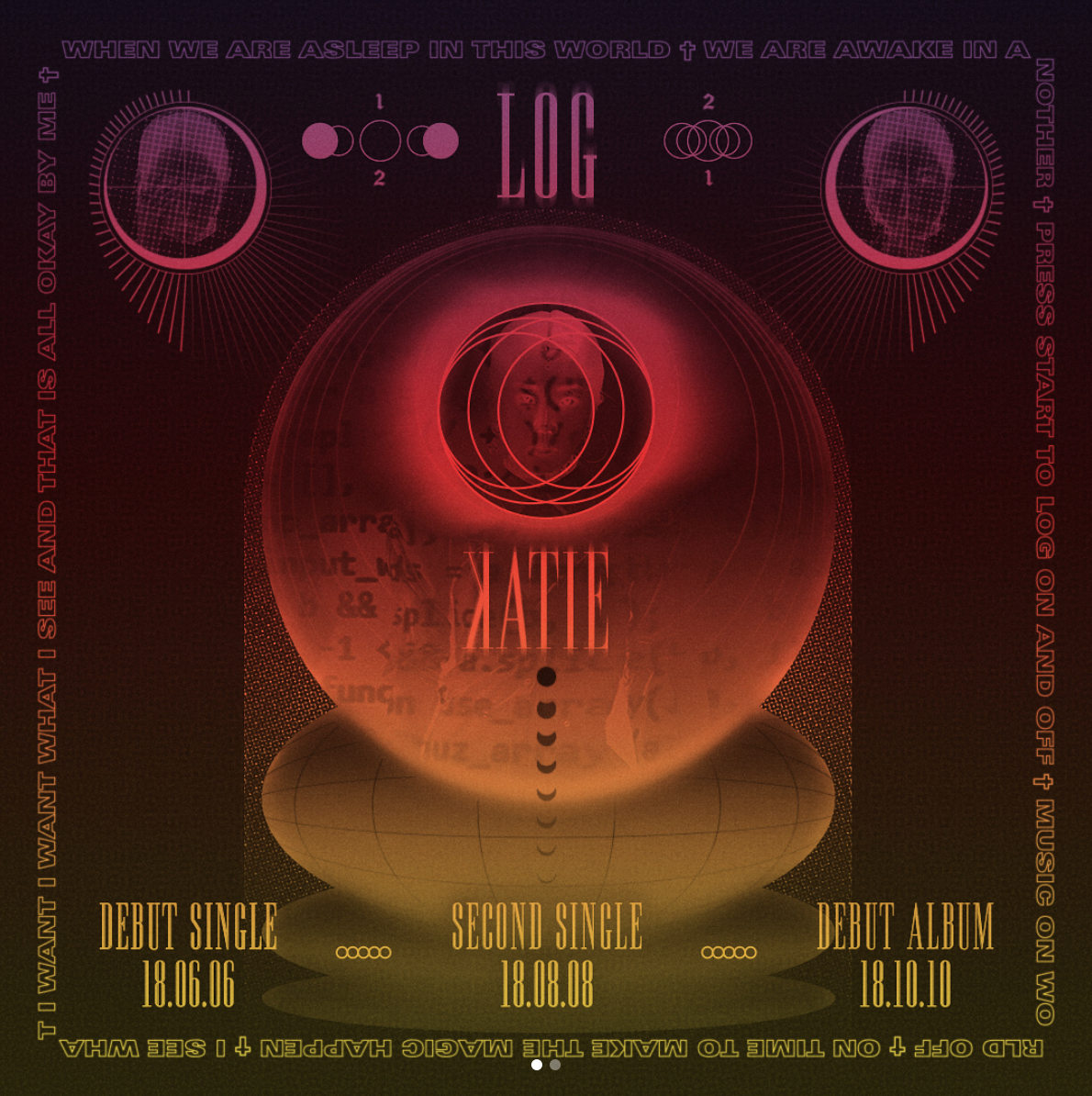 Winner of K-pop Star 4 and Ex-YG dungeon personality Katie Kim is back after a three-year hiatus. Sadly, it’s all for YG Entertainment’s explanation as to why she is leaving the company. For the most part, it has to do with her interest in producing music similar to what’s prominent in America. Although, that is hugely coupled with YG’s former creative director and Katie’s manager, SINXITY leaving to form the newly-founded music agency, AXIS.

With that said, maybe it’s not such a sad announcement, after all, it’s also the story of how Katie Kim became AXIS’ first artist. But more importantly, it’s the story of how we get “Remember”, a K-pop song that’s entirely made in English, is composed of American trends and is made for what seems to be an American audience. For a bit of context, Katie was born in Korea before immigrating to the US where she stayed most of her life. Further, during her three years at YG, she was sent to writing camp with American producers. She likely knows American culture better than Korean.

Nevertheless, for “Remember”, everything started on AXIS’ Instagram, mainly through a series of posts called the “birth of Katie”—which in itself is pretty self-explanatory. Soon after, different posts came to appear, seemingly teasing what would come next. From cryptic posts and images, to what seems to be a key idea: The Circle of Quintinity. Following, the concept of LOG is introduced, apart from sharing Katie’s dates for upcoming singles, it seems to foreshadow upcoming artists as part of LOG. Interestingly enough, this all closes down with the release of “Remember”, and more importantly a post which says “AXIS’ ARK”. If I had to guess and organize all this information, I’d say “Remember” is not one of the stories under the ark, but LOG with the concept of “The Circle of Quintinity” is. “Remember” is simply the first self-contained story in the world of LOG, which seems to be part of the AXIS’ ark.

Regardless, by itself “Remember” is a mood-driven, synth-full R&B track that superficially talks about what a broken relationship is like—and sex, obviously. While along the song, the MV looks exactly how you would expect. It’s best described as modern, full of light and color contrast, symmetry all over the place, on-beat transitions and small unsuspicious use of CGI to finish it all. Basically, it’s what the new cool kids would call aesthetic. Don’t get me wrong, it undeniably is, but it also doesn’t seem to have a storyline that’s concrete. Rather, the MV uses self-contained symbolism to explain itself.

To understand further, it’s important to note that the lyrics aren’t written by Katie but by Kepler who is also the producer. This fact once more connotes that “Remember” might not be a personal song, but rather a story AXIS wants to tell. Either way, lyrically, it’s not really a masterpiece. Composed of 2 verses, and to hold it together a pre-chorus and chorus, the song describes a broken relationship. One that lingers and holds, at least for one of them—the other one just seems to enjoy it all with disregard. All in all, it’s a 21st-century superficial relation: it’s all sunshine as neither party can see each other’s flaws. Sex is also very prominent, which as a theme, is introduced in the chorus. By the way it’s written, you are lead to believe Katie used to be very much into it with her partner. In spite of this, the second verse reiterates that it’s not all sunshine—sex is her weakness, and the other person uses it to fix everything that’s wrong.

You left me no decision

To point the finger at you

You kept on coming back

With all your reasons

And when it wasn’t working

You always gave me something

Thankfully, unlike in many MVs, the lyrics tie up very well with what’s going on, as both seem to be in concordance. Visually, there is one reigning element: gold. Gold is mischief, gold is control—gold is, at times, Katie’s lover. Initially in the music video, there’s nothing, it’s black and white, showing what would be her “true” state. Then, in a very subtle manner, gold comes in; it can be seen in the building she is in, it can be seen on her as jewelry. Between shots, the heavy shadows are removed giving way to show how much of it is on her.

All of this can be interpreted as Katie’s departure from the “true” state, a state where no one has shaped her. Following, the gold that comes represents: the memories of control that are left from her old lover which can be seen everywhere she looks, and how it has all shaped her as a person, seen mainly in the jewelry she’s wearing. 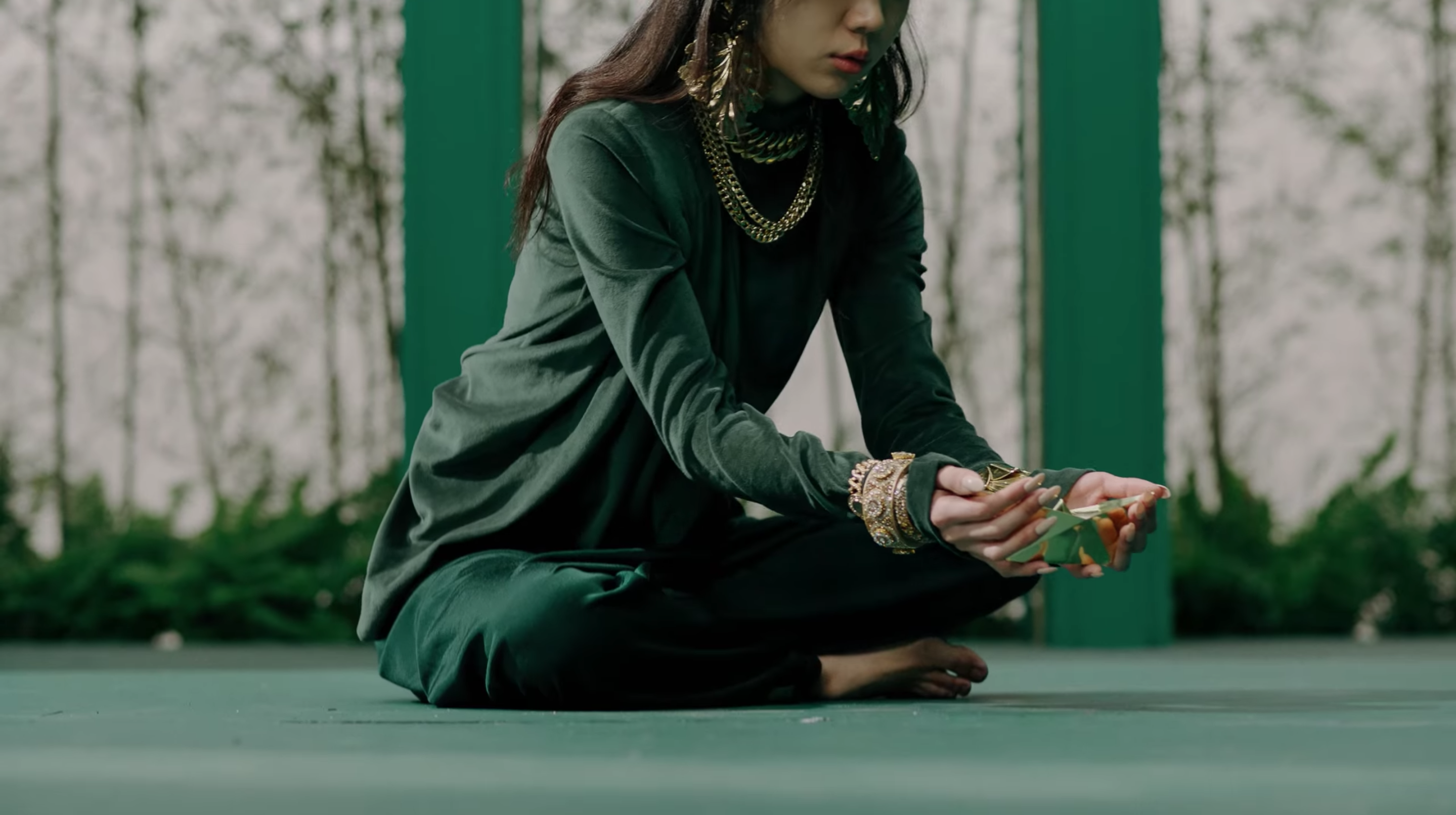 This increase of gold keeps going until the line “boy you had me hypnotized under your spell” in the first verse. At this point, Katie admits to knowing what’s going on and tries to free herself. Symbolically, this is explained by her removing the golden drapes under her. This moment of enlightenment is also what paves the rest of the MV. Between the shoots leading up to the chorus, Katie can briefly be seen picking up some gold, here she’s basically accepting the sort of malfeasant power her lover had. Now that she has been hurt and shaped one way, why not use the same selfish sense of self and mischievousness to get her way by damaging others?

The rest of the music video works to explain the damage a broken person can do. There’s a specific part where some guys get up on a golden stage. To me, there’s no doubt this signifies the guys Katie will hurt in her life. Moreover, I find it really interesting how power gives the sense of confidence. After Katie picked up the golden piece, the song picked up momentum, not only was a clapping sample added to the melody but in the MV, Katie appears much more confident than before. From there on, aestheticism, edgy looks and a lot more gold give the video an end.

With that explained, I find it really interesting that when taking all the pieces presented, the result is an MV that’s overly complicated for no reason whatsoever. The self-contained symbolism only alludes to itself to form a superficial cryptic story, and most of it is hidden between the beat-fast transitions—which I guess is the price to pay for the nice aesthetics (though, it shouldn’t be).  Again, all that I have tried to explain is overly specific to simply show my interpretation of the overarching theme of the song and MV: how people change us, or more specifically how love shapes us. 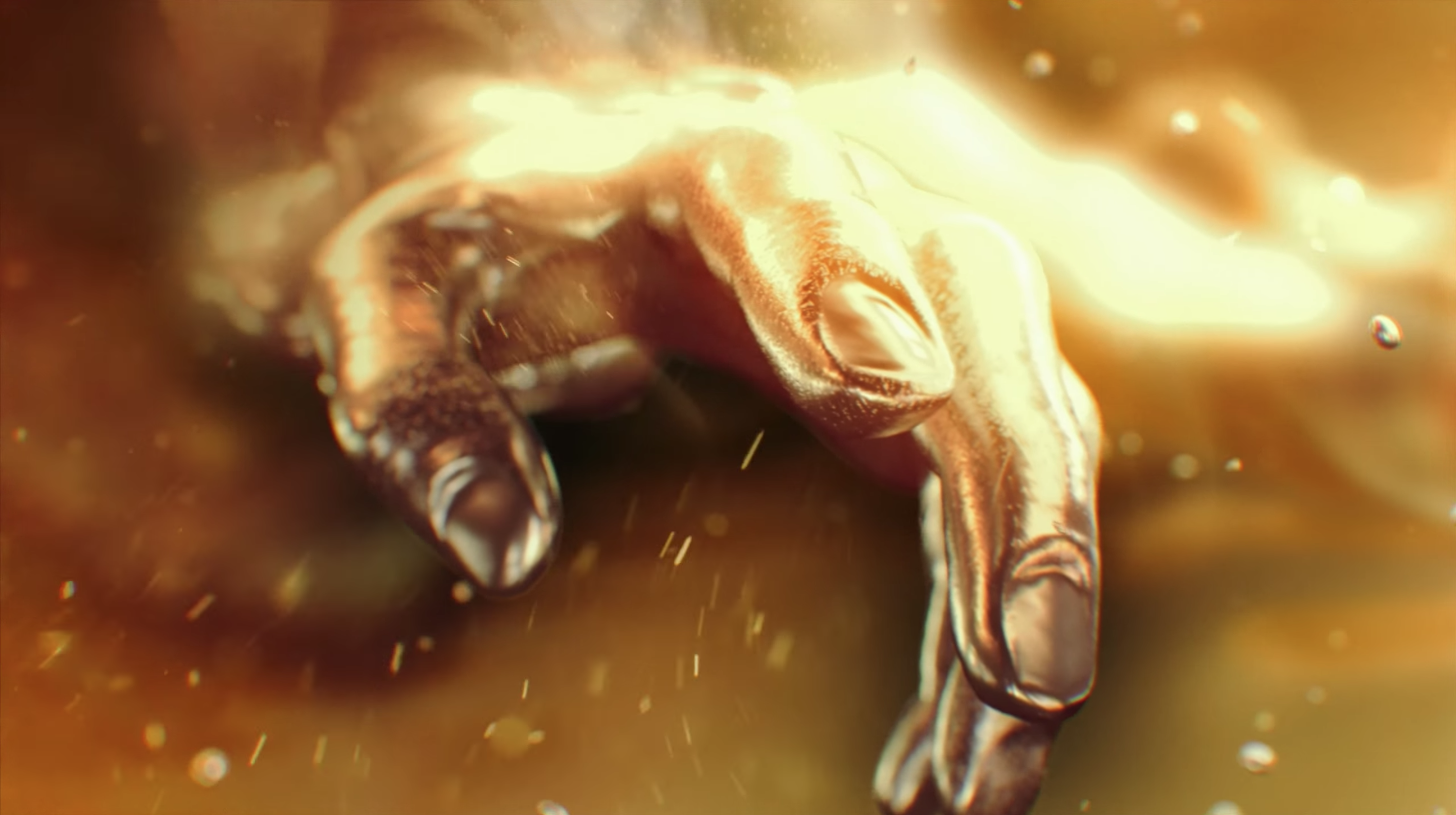 Regardless, it’s worth pointing out that whereas I have said that there isn’t any sort of outsourced symbolism, some disagree. Youtuber Nicolas Perkins portrays the whole MV as a mythology stew. The more I watch the music video, the more my brain is inclined to believe that there might be more as Nicolas explains. Despite the level of objective accuracy that his interpretation might have, he makes a well-sustained video where everything seems perfectly placed.

Sticking with either interpretation, as I said before, there’s something I find really interesting about this music video—it’s all pointlessly complicated. I’m sure the director of the MV did not expect the majority of people to look this deep. Maybe I’m downplaying SINXITY and his team, but for a new company and a new artist, it all seems painfully useless. Sure, it’s cool—but let’s be honest, with the following that Katie Kim has, maybe Nicolas, me and someone else watched this video as many times to uncover its “true” secrets. It’s not cost effective to make a video that’s deep when most people will watch it once and marvel at the pretty colors and transitions that match the beat.

Having complicated storylines that are intricate is very cool—when you have a fanbase. That’s not to say that new groups or artists can’t have complicated, deep universes; Loona has wowed the world, Exo made it their thing at the start. But they really promote it as part of what their songs and MVs are. People might just not be invested to look underneath when the promotion for this whole AXIS’ ark is non-existent. There’s no sight of it on the MV itself, not on the description,  not even on AXIS webpage. 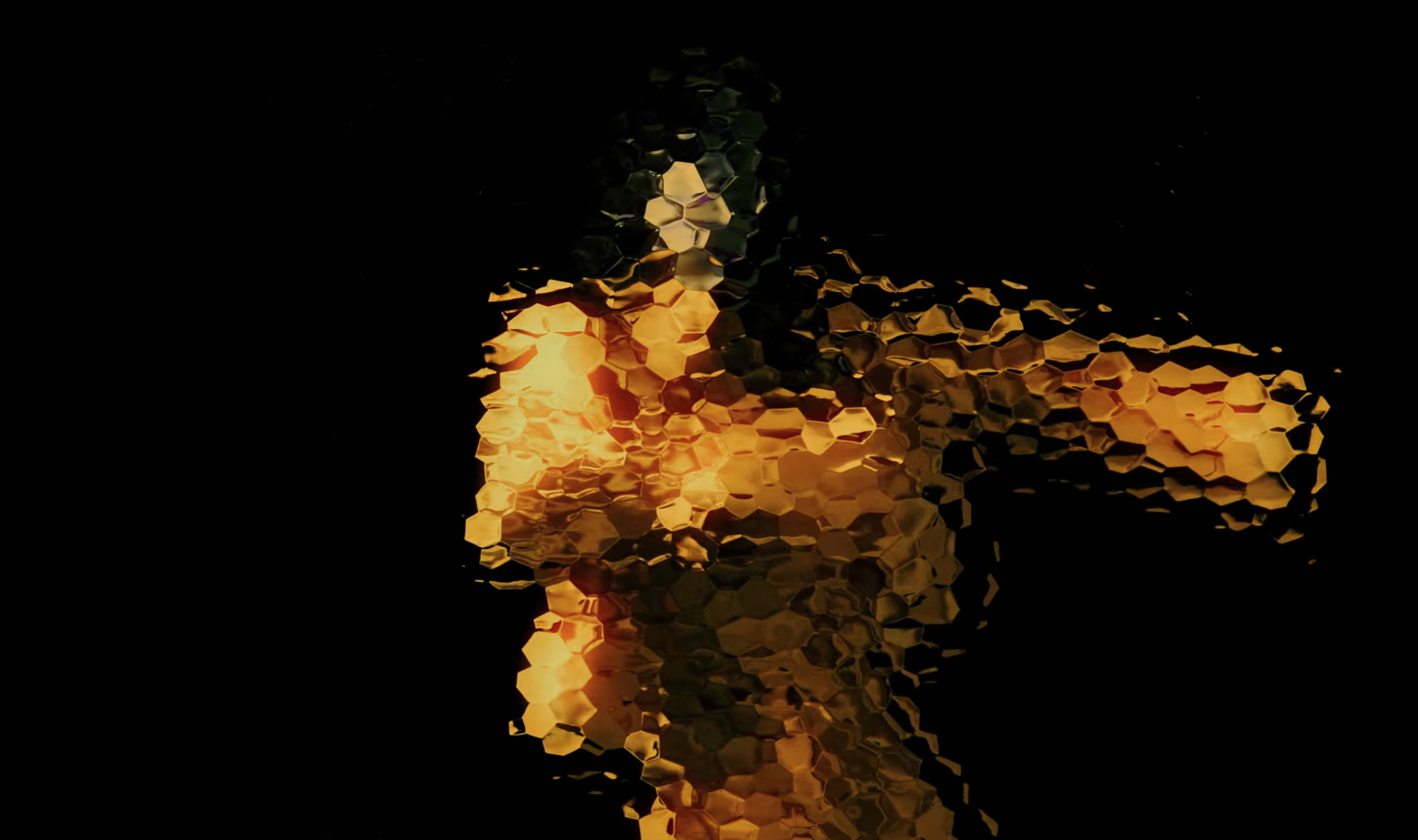 Going back to the examples I just gave: Exo had an animated intro to their “Mama” video which explained it all; Loona’s first single had loonatheworld.com in the description. Where is the introductory piece for this ark? After all, I’m still left with the question: what is AXIS’ ark? Which I only know about because I went about a month back on the company’s Instagram for research purposes—again, something the average person just wouldn’t do.

Still, if you ignore the pointlessly complicated MV and the ineffective form of marketing, “Remember” is pretty cool. It has to be taken into consideration that after all, it’s K-pop without the K, and that’s fine. Reality is, outside of the world of Hallyu, the majority of people aren’t nearly as obsessed with everything. Labels need to cater to their audiences, be it with new trends or for different demographics. If AXIS’s plan was to cater to an American/International audience then props to you guys. Otherwise, try again! To call “Remember” simple, sure—but to call “Remember” lackluster, well, that’s up to who you are. The only thing we can agree on is that everything around “Remember” is messy.