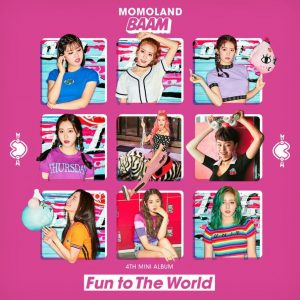 After struggling to find a solid image in 2017, Momoland kicked 2018 off with their breakthrough hit “Bboom Bboom”, aided by JooE’s viral dancing and the songs infectious nature. But it’s not the first hit that makes a music act; it’s the second. Without a solid follow-up track, Momoland could easily fade back into obscurity. The announcement that their next title track would be called “Baam” made obscurity a near-certainty in my mind because nothing says “failed follow-up” quite like knocking off your only hit. Ladies and gentlemen, consider my words well and truly eaten.

Making the same song over and over is usually a one-way ticket to diminishing returns. People get bored and move on to groups that are making new music. That said, an exception can be granted if the second time around is not a retread, but an improvement. “Bboom Bboom” was solid, but “Baam” is a knockout.

There are similarities between the two songs, most notably the synth horn riff that provides the hook. However, they’re not the same hook; instead, being just close enough to provide artist recognition before “Baam” solidly shifts into its own sound. That sound is loud, fizzy electropop that is practically bursting at the seams. The production is built on multiple sticky synth lines that drop in and out to provide constantly shifting soundscape, matching by the high-energy performance of Momoland themselves.

The only issue I have with the song is the rap section, which can feel out of place with the rest of the track. The adlibs pull from trap and don’t mesh with the electropop and wild energy that makes up the rest of the track. It’s not that jarring, though, and after a few listens it honestly becomes a welcome breather for the infectious dance jam. “Baam” is an unrepentant earworm, but one that’s so much fun that it’s hard to object to.

The MV is sadly more of an issue, having a few poorly thought-out moments that run the risk of overshadowing everything else. The core concept is simple– Momoland in various eras, each of which contains a hidden jewel for the viewer to locate. It’s a fun concept; especially as the jewels aren’t too difficult to find. The only hard part is not getting distracted by the zany antics of Momoland, and indeed, that is something of a trick.

The primary sets feature the members of Momoland in historic Korea, Ancient Egypt, Versailles-era France, and Vietnam. The shots are all of the various members engaging in hijinks, with a big one being when Yeonwoo gets flung from Korea to Egypt. The most fun comes from seeing Momoland hike up their petticoats and áo dài’s in order to dance. “Baam” has a great dance, with the hook move that reminds me of a cross between the Running Man and the Charleston. It’s extremely cute and deceptively simple, the kind that will inspire people to teach themselves and enjoy failing to do so. The group shots of the choreography are the real MV standouts– backlight with light-up sneakers to emphasize the controlled flail of “Baam”.

The questionable aspects come from the definitely modern scenes. Some are placed in the Philippines, as a reference to Nancy’s resemblance to Filipino actress Liza Soberano, and they definitely feel shoehorned in; as a replacement for the viral buzz that JooE gave their previous track. The real issue lies in the Mexico-centric scenes. While the other costumes are pulled from the traditional dress or popular perceptions of bygone eras, the Mexico costuming is pure stereotyping– sombrero, moustache, and loud prints. It’s tacky and out of place, even more so than the Philippines shots. More than anything, the casual dismissal of Mexican culture in an MV full of cultures just gives the whole thing a bad taste, which is unfortunate considering how close they were to having an MV that was just disjointed and wild enough to hit peak fun.

All in all, “Baam” is a vibrant piece of electropop. While the MV might have flaws, the song itself is killer, and has quickly become my summer jam, if only because I can’t get it out of my head.