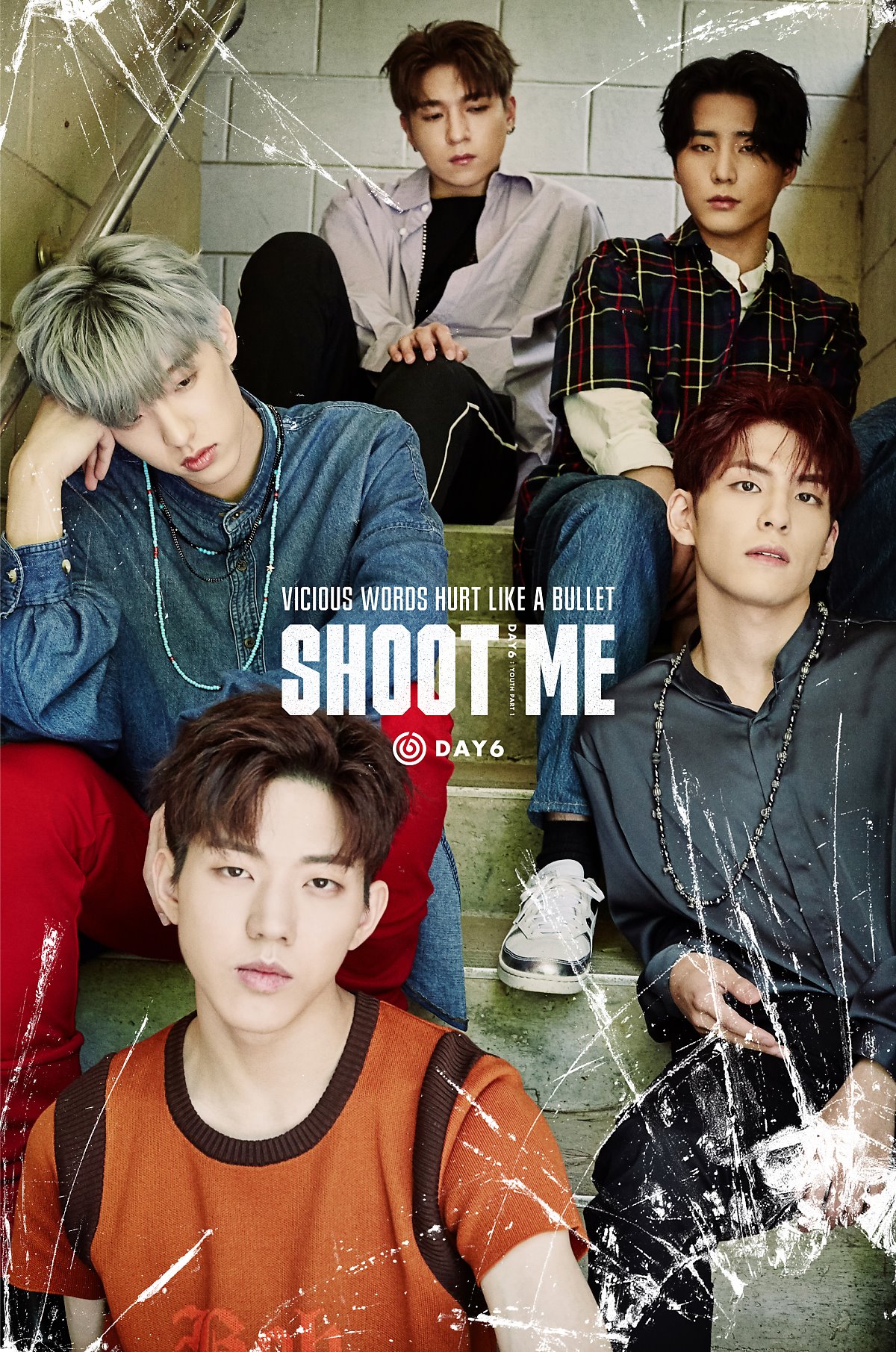 After a dynamic 2017, with a whopping 25 new songs from albums Sunrise and Moonrise, Day6 scuttled into their Japan promotions. In the past six months, My Days had to settle for “Stop the Rain,” a Japanese single, and remakes of hit tracks. But the wait is finally over, and we have all been gifted with Shoot Me: Youth Part 1. Since its release, the media has been focusing on the 180-degree change in musical style for this album. Unlike the familiar soft rock sound, Shoot Me: Youth Part 1 is aggressive, angry, confrontational – everything that Day6 has not been before.

The concept of this album might be unlike the usual Day6 pastel melancholic nature, but they have hinted at their capacity for such edginess in the past. The striking red of the album cover is a statement in and of itself, recalling their experiment with “I Wait.” Even the gun images are a faint echo of “Hunt” from Daydream.

Shoot Me: Youth Part 1 is probably best described as a mishmash of brooding Halloween tunes (think Marilyn Manson’s “This Is Halloween”) with an explosion of punk rock elements. The title track, “Shoot Me,” is bursting with violent energy, like a taut rubber band ready to snap any moment. Day6, as expected, goes beyond merely imitating genre. Isolating electro-synth sounds in the track’s melody, the band puts a different edge to an already pulsing tune.

The album places a heavy focus on choral parts, evident in “Shoot Me” and “WARNING!” Serving to build up an energy matching the rock guitar riffs and heavy drumming, “Shoot Me” is an especially good example of the band’s play between vocals and instruments. Prior to the bridge, the band choruses over a bare hi-hat rhythm:

Following immediately after, the song explodes with Wonpil belting out the bridge. The instruments jump in like a proper hard rock song, driving the melody forward. A head-banger till its end, “Shoot Me” delivers as the concept posters have painted. Grungy aesthetics come in place with the lack of restraint blatant in the title track. 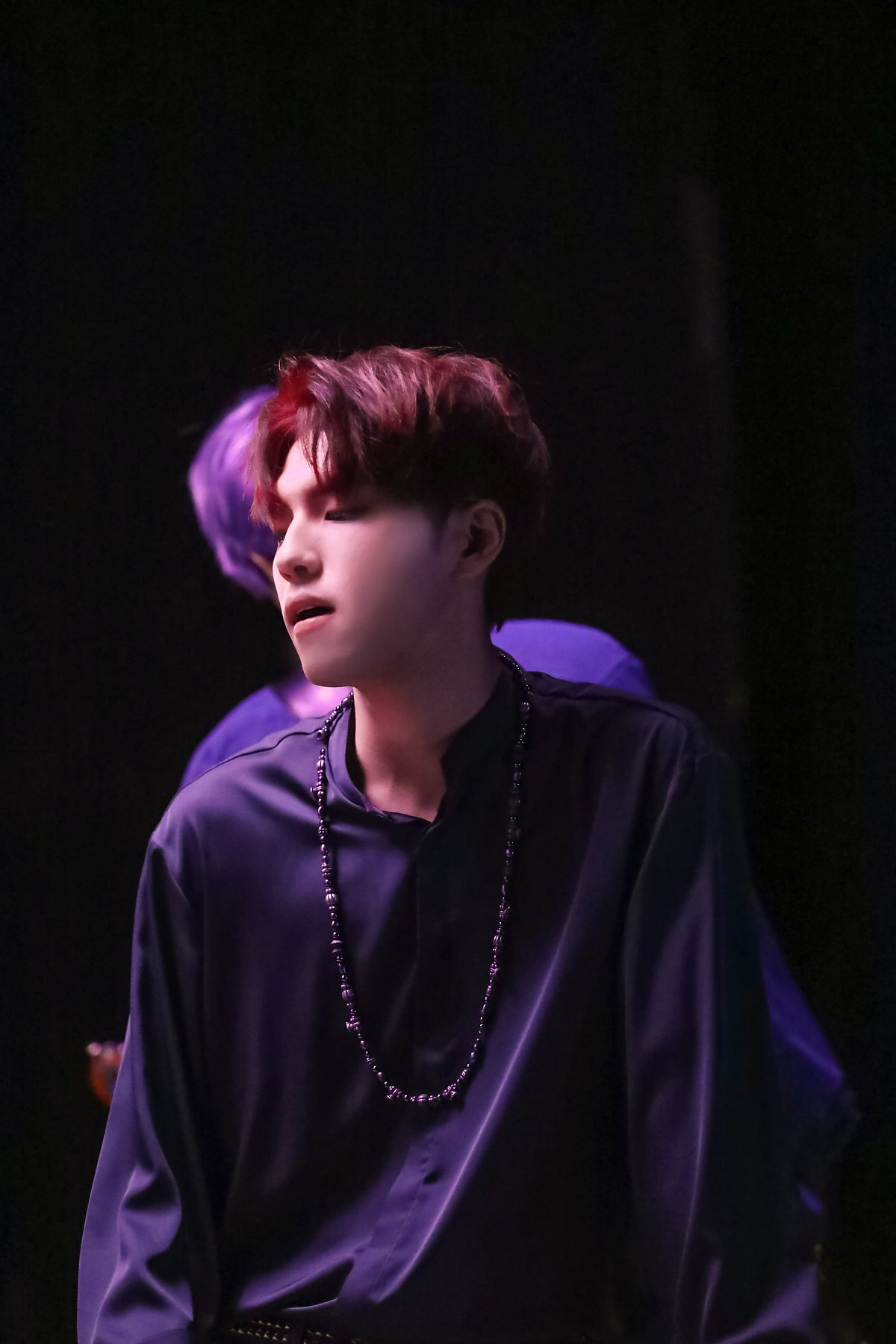 However, the album progresses to be less aggressive in tone, returning to the Day6 music style we all know and love. “Somehow,” “Feeling Good,” and “Talking To” are all reminiscent of tracks from the debut days. Day6 reaches across a spectrum, from comfortable grooves suitable for a lazy afternoon in “Feeling Good,” to the tangled expressions of emptiness in “Somehow” and “Talking To.”

Day6 proves their mastery of diversity beyond melodic experimentation. “Talking To” is cheeky in its lyrics despite its similar description of longing to “Somehow.” Sung-jin and Young K answer each other in the early verse, whereas Young K’s adorable enunciation of his parts puts a twist in flavour.

On the other hand, “Somehow” is a pop rock tune, reminiscent of tracks like “Pouring” or “Lean on Me.” Yet “Somehow” manages to deviate from previously produced tracks by matching an upbeat melody with a sense of melancholy. A song that focuses on forgetting and learning to cope after a breakup, the song acts as an outpouring of despair:

Somehow
I will slowly get rid of you
If I keep living like this, I’ll be able to erase you
Somehow

As I listened to it, I caught on to the unique allocation of parts—all four vocalists take on the same high notes in the chorus (“난 널”). The colour of each vocal delivery adds dynamism to the song, while at the same time fusing together in an expression of heartache. 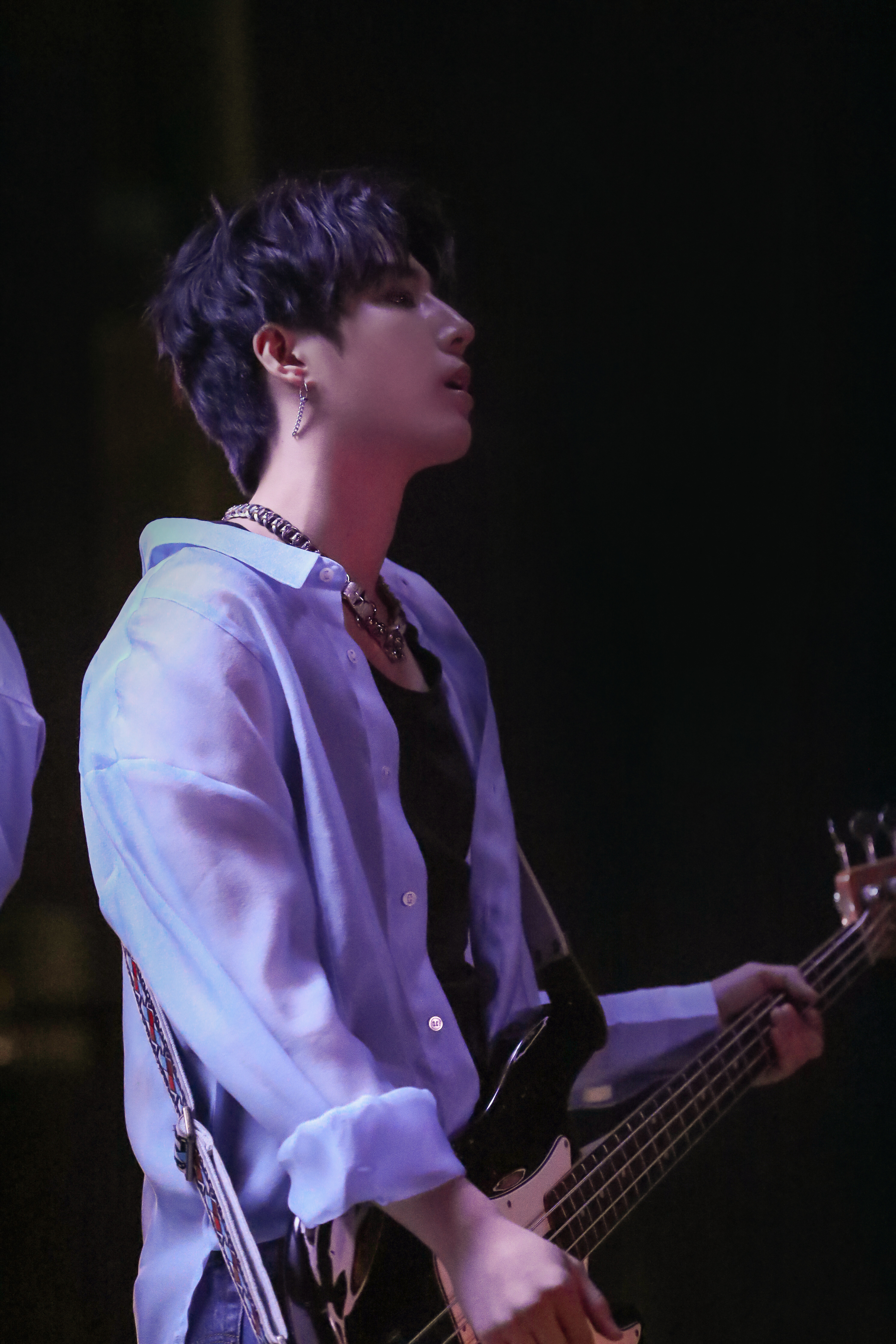 These aren’t easy notes to reach, and its a wonder how they manage with this song. It starts with Sung-jin’s husky tone, followed by Wonpil’s gentler vocals in the first chorus. In the later chorus, Jae’s thinner voice picks up the same line with a different zest, before we get Young K’s crystal clear high notes. Kudos to Day6, considering the vocal diversity of the group.

It seems Day6 are pushing the limits of their vocals in this album. The power high notes and shouts pervade every other track. The angst in “Shoot Me” is delivered so sharply in its chorus, and Wonpil leads the pulsating bridge with only his vocals. I can already imagine the veins bursting as they perform these songs live—but they do make for awesome concert pieces. Resisting the urge to echo “BANG BANG” and “Shoot me! Shoot me! Shoot me!” is an impossible task, trust me.

The album wraps up by leaving behind all the experimental punk rock style with “Still.” Arguably a tradition in Day6 albums by now, the band never fails to deliver a ballad of sorts. The Every Day6 project had “My Day” and “I’ll Try,” as final pieces of each album, whereas their debut album ended with “Colours.” These are comforting tunes dedicated to the fans and precious reprieves, often acting as words of encouragement.

“Still” adopts a similar approach as a consolation and promise to their fans. The lyrics though simple paints a beautiful portrait tinged with melancholy:

The song’s softer tone might seem out of place with the rest of the album, but it works perfectly as the concluding track. Acting as a punctuation to this set of songs, it is a moment of rest from the hard-hitting tracks that come before. Almost as though having returned from a whirlwind voyage, “Still” is a reassuring embrace. Behind all the experimentation, they are still the band whose songs give strength and comfort. 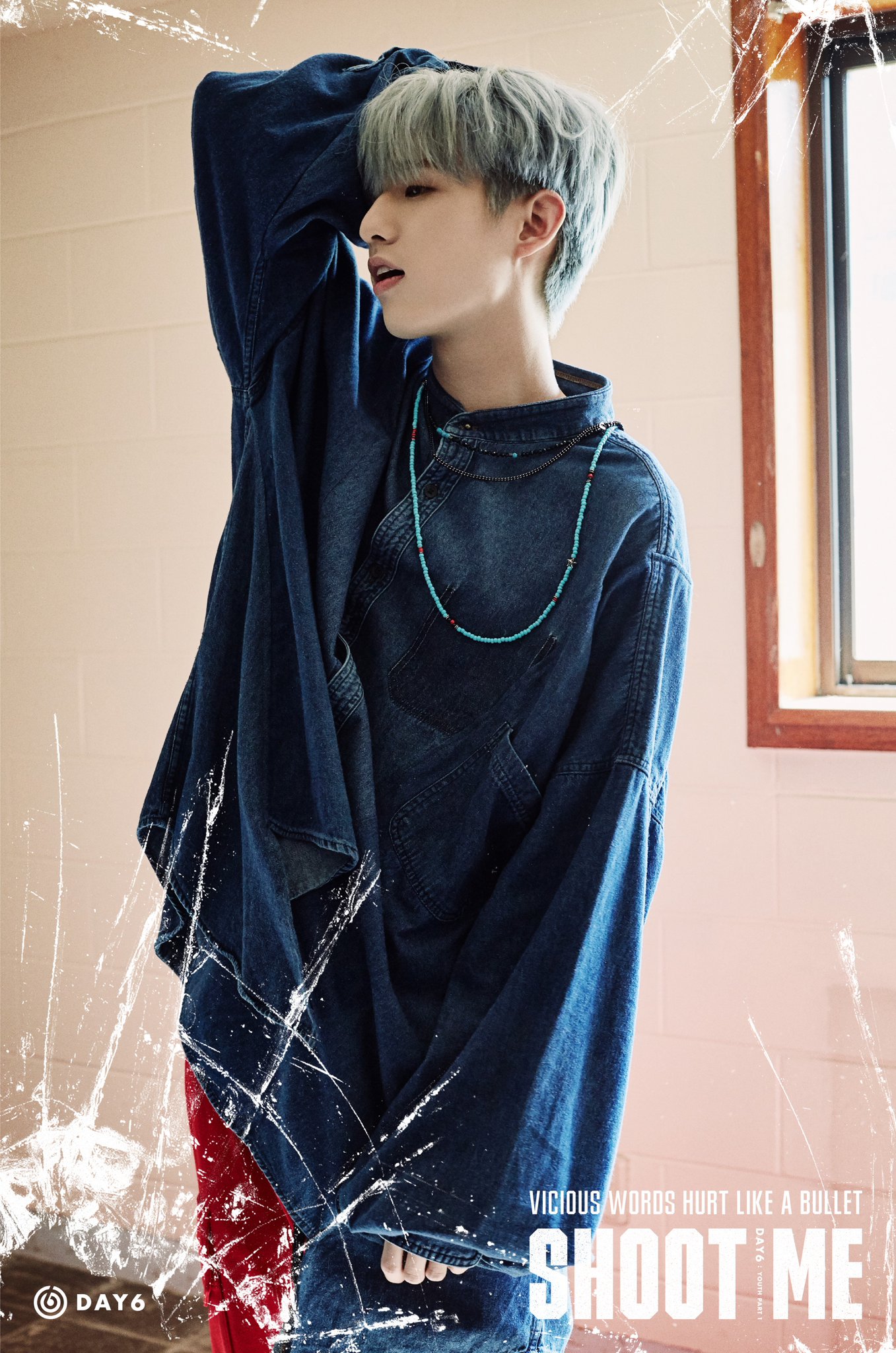 In the band’s appearance on Dingo Chat Interview, Jae likened listening to the album, from track one through to track six, to going on a trip with the band. There really is no better way to put it. Shoot Me: Youth Part 1 is one heck of a ride, musically and lyrically. In terms of emotional highs and lows, the band starts with a bang and carries listeners through to a comforting end. The album is only 30 minutes, but Day6 manages so much with just six tracks.

As the band heads off on their world tour with these new songs on their setlist, My Days are really in for a treat. Day6’s musical spectrum seems boundless, even as their repertoire of songs grows and grows and grows. If this is only part 1, I wonder what else they have hidden instore. It’s bound to be good because it’s Day6 — that we know — but the anticipation is already killing me inside.