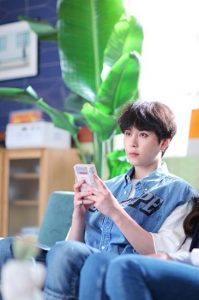 Since establishing Around Us Entertainment to take control of their image and musical output, the members of Highlight have released a steady stream of solo work between their collective comebacks. While Yang Yoseob and Lee Gikwang dropped solo EPs with White and One respectively, it is Yong Junhyung who has helmed this shift with successive singles “Wonder If”, “Too Much Love Kills Me” and “Sudden Shower”. This tactic has enabled him to establish a signature sound beyond Highlight, which is encapsulated in his first full-length album Goodbye 20’s. The title track “Go Away” is indicative of what listeners have come to expect from Junhyung and his production team Good Life, with an intriguing blend of light and dark in both its mood and message.

The music video reflects the song’s bright but melancholy vibe with its vibrant colour palette and clever use of visual effects. While the ensemble of Junhyung clones that appear during each chorus seem cute, they also serve as a clever visual representation of the restlessness evoked in the song’s lyrics:

Junhyung sings the autotuned refrain while sitting motionless beside his attentive girlfriend, her smiles a stark contrast to his deadpan expression. Meanwhile the clones scatter around him, messing about and side-eyeing the couple. It’s funny at first, but in the last chorus, one finally takes off, running towards the camera in a clear allusion to Junhyung’s desperation to flee the scene.

This symbolism continues in the use of retro props scattered throughout the MV. During the first verse Junhyung’s girlfriend listens to music, while he sits beside her unravelling the reel inside the mixtape, breaking the connection between them. While she eats breakfast, he plays with his food. They are distinct opposites, a point evoked best in the final chorus, when the two pose outside a model house in a creepily fake representation of the perfect happy couple, before Junhyung comes to life, and strolls away. 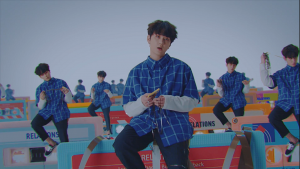 In a cool meta moment, the couple listen to the track sitting in a red vintage convertible. This framing device implies that the entire song is Junhyung’s breakup speech. But the slickest of these metaphors is when Junhyung sings the line, “What’s the use of coloring a failed picture?” He stops painting to break the fourth wall and make eye contact with the viewer, as if to acknowledge the futility of his efforts to maintain the relationship. Yet it isn’t a bad breakup, and the quirky, tongue-in-cheek tone of the MV is significant in its contrast to the dark-hued, dramatic music videos Junhyung released to accompany Beast’s repertoire of melancholy electro-pop tracks such as “Shadow” or “Fiction”.

It would be easy to claim that “Go Away” is a safe release for Junhyung. Its laid-back funk style allows him to deliver the more mellow flow he’s known for as a rapper, while the choruses showcase his vocals. This song is a chill slow jam that’s easy to listen to, but it lacks the visual or sonic kick of “Flower”. But I’d say this is Junhyung being smart, rather than lazy. “Go Away” continues the bittersweet sound he established through his work with Beast and updates it to tie-in with Highlight’s brighter image.

Here he demonstrates that a breakup song doesn’t need to be a soulful ballad to tug at the heartstrings. Instead, “Go Away” skillfully tells the story of the kind of breakup many people experience. Rather than a clash of emotions, it’s a subdued, slow separation. What’s even more interesting is that, unlike many K-pop songs, “Go Away” doesn’t try to dramatize the fallout or even blame the other party: 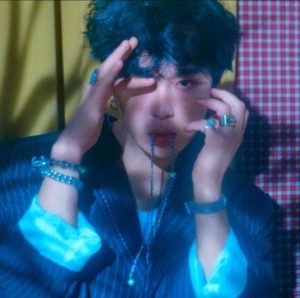 Lyrics like these illustrate Junhyung’s maturity as an artist, and create a track that’s wonderfully true to life. This echoes Highlight’s new image as guys-next-door, while giving Junhyung the opportunity to demonstrate his flair as a rapper, singer, and dancer. The relaxed street-style he rocks in the MV furthers its relatability, and the clean choreography fits the song’s groove while letting Junhyung’s charisma take centre stage.

This release may be familiar, but it is to Junhyung’s credit that he’s capable of maintaining and developing a signature sound through the course of his career. I’d like to see him experiment a little more in the future, but for now, “Go Away” serves as a great headliner to his first LP, rounding out the style he’s curated thus far and marking a new chapter in his solo career.