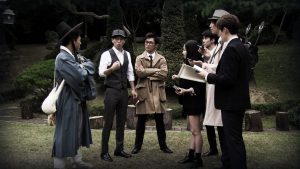 Internet television network and streaming service Netflix has slowly been making its way into the Korean entertainment industry, but it recently made another big stride with the premiere of the world’s first Netflix original K-variety series, Busted!, which came out on the 4th of May. The show initially gained a lot of hype because of its stellar cast, consisting of variety stars like Yoo Jae-suk as well as popular idols such as Exo’s Sehun and Gugudan’s Sejeong, but the unique format of the show eventually attracted a lot of attention as well. While Busted! has familiar elements of Korean variety programs such as Running Man or 2 Days 1 Night, it stands out in how it is deliberately catered to a wider international audience, and is something we certainly have never seen before.

The following contains mild spoilers for Busted! episodes 1 and 2.

Busted! is carried by Netflix, but it is helmed by experienced variety producers such as Jo Hyo-jin (who previously worked on Running Man) thus explaining the identifiable variety elements of the show. For instance, while there are many parts of the show that are scripted, the cast also has room to banter with each other, resulting in many witty comments and savage moments reminiscent of what we love in Korean variety programs. Together with Yoo Jae-suk who leads the cast, variety veterans Kim Jong-min and Lee Kwang-soo do not disappoint as they keep the show from being too serious with their general cluelessness about what is going on and their natural instincts for slapstick comedy.

The challenges that the cast has to complete to get closer to solving the mystery are also very variety-style, as they force cast members to venture beyond their comfort zone and often ensure that the cast ends up in a hilarious state, be it wrapped around a moving log during a hilarious game of passing water and filling up a bucket or pathetically drenched from relentless water bombs because of missteps in episode 1.

The similarities stop here, however. Where Korean variety has mostly catered to domestic audiences, Busted! is targeted at a more international audience, one that can be assumed to have no prior knowledge of Korean variety or entertainment in general. To begin with, there is an obvious shift in how guest appearances are treated on Busted!. Where most programs would only feature a few guests each time and highlight them throughout the episode, Busted! boasts a wide-ranging group of star cameos for its ten episodes and each guest plays a role which would help the cast solve the mystery. While they are easter eggs for longtime variety fans to discover, especially since their character names are often clever adaptations of their original names (i.e Rena Park was played by entertainer Park Na-rae), they remain perfectly serviceable to the episode and mystery even if the viewer did not recognise them, which increases the overall accessibility of the show to its target audience. 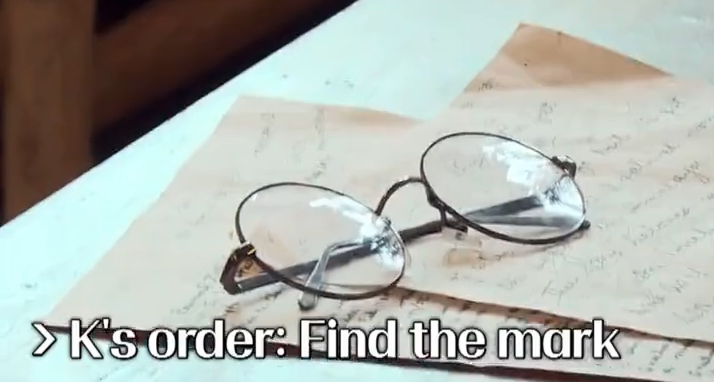 The English captions are another noticeable departure from traditional Korean variety programs, the Korean captions of which often contain inside or word jokes (i.e puns), privy only to long-time viewers of the program or native speakers of Korean, who would understand the humour. For example, in 2 Days 1 Night, comedian Kim Jun-ho is often labelled in the captions as 얍스 (yab-seu), which means devious, because he is known for his cunning ways on the show. International viewers stand to lose out on a lot of the humour of these programs (shows like Three Meals A Day, in particular) if the captions were not subbed along with the dialogue, hence having directly English subtitles reduces the reliance of viewers on subbers.

Furthermore, the captions here are mostly used to spell out the progress of the mystery for viewers, by literally identifying clues or marking locations. While the overly frequent captions might be new to some, they do and hopefully will continue to aid viewers’ understanding of the case proceedings, especially if the mysteries get more complicated and convoluted. The captions and screen transitions such as floor maps are also presented in multiple stylistically interesting ways, and elevate the overall quality of the program. 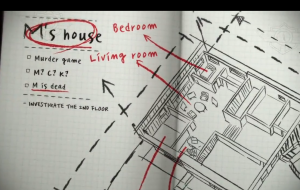 Busted! definitely benefits from its high budget as the elaborate escape room structures and the cast moving around various locations to meet different suspects increases the realism of the cases, but there is only so much that set-up can accomplish. One of the most frequent complaints about the show’s first two episodes was its overuse of scripting, which made everything feel artificial. For example, the cast members had to play personas which were introduced in the first episode. (i.e actress Park Min-young is supposed to be a travel and mystery lover while Sehun is a choreographer)

While atypical of variety shows where celebrities normally show off a more “real” side of themselves, this would have been more convincing if the personas were actually developed properly in the show, with the different identities of the cast members contributing to varying perspectives or skill-sets. As it is, the cast members still speak and behave mostly as their original selves even though they supposedly have a fixed persona, which results in Busted! at times being a confusing mix of a crime drama and a variety show.

Another point that attracted a lot of criticism from viewers was the low stakes involved in the solving of the mystery. While the production team and the cast put in effort to create urgency in the whole bomb disposal part at the end of episode 2, the tension could not be conveyed to viewers because they knew that the bomb obviously would not be real, and the cast would not be put in any actual danger while filming this series. Aside from the suspension of disbelief needed, it makes it hard for viewers to root for the cast solving the mysteries if there is nothing in it for them beyond playing a role and progressing the general plot.

In Crime Scene, rather than placing the cast in “danger” if they did not guess the culprit correctly, prize money was awarded to those who made correct deductions in each episode, but the money was only received by the top three earners at the end of each season. This did not just incentivise the cast to keep trying hard in each case but kept viewers invested in the progress of the members and rooting for them. Hopefully, as the show progresses and the cast members get more settled into their personas, the plot would pick up momentum to become a more successful and cohesive mix of a drama and variety show, which is what it was intended to be. 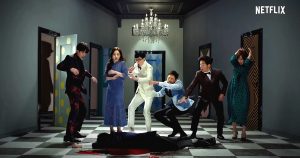 As it stands, Busted! is a pretty entertaining watch, and the growing chemistry between the cast is definitely something to look out for. The way it reaches out to international audiences while striving to retain variety fans is creative and mostly effective, but would take a while to get used to. In the meantime, it would be easier to enjoy the show for the unique fusion that it is, rather than constantly comparing it to existing variety shows, especially since it is still in its early stages. While it has room for improvement, Busted! is a promising start to a wider spread and globalisation of Korean entertainment.