Three Meals a Day, Meokbang, and the Korean Food Trend 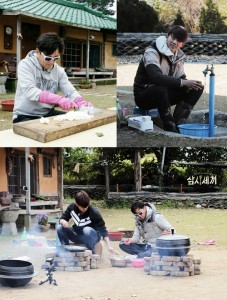 Ratings with more than 6% for a cable television channel are very rare. Crossing that threshold means that a show is officially a sensation. So if a tvN cooking-eating cable variety show reached 8.3% in ratings, no one could deny that it is simply crazy.

Na PD — the genius behind 2 Days 1 Night and the Over Flowers series — is responsible for coming out with this smashing hit; Three Meals a Day. The idea is to put actor Lee Seo-jin and 2PM member Taecyeon in a secluded village house and ask them to cook anything and eat those meals three times a day. Little that he knew, his simple idea has sent Korean audiences into a frenzy.

However, Three Meals a Day and its food-centric theme is not an isolated incident. In fact, the show is only the tip of recent cooking and dining shows that have hit the small screen throughout this year. It started off when KBS2 introduced The King of Food featuring Shin Dong-yup, then O’liveTV aired Korean’s equivalent of MasterChef — The Battle of Korean Cuisine — with some success. The Battle of Korean Cuisine managed to hit 1.7% ratings, a considerable amount for a small specialized cable station such as O’liveTV. Now, SBS and KBS are also cashing on this trend with planned cooking battle shows, Cooking Korea and Miss Korea respectively.

Why has this sudden appetite for food programs emerged, and what does it mean?

Well, first, there are changes in terms of demographics in Korean society. The proportion of single-person households drastically increased to 35.9 percent in 2013 from about 9 percent in 1990, according to Korean Statistics. It represents a changing culture in Korea where many people have to eat meals alone. However, Korean culture does not look upon eating alone too favorably. Cultural critics say that those who live alone feel loneliness and find more vicarious pleasure by seeing someone eating. This is the way for audiences to alleviate a sense of “alienation.” While they are watching these shows, they feel connected and feel that they are not eating alone anymore. 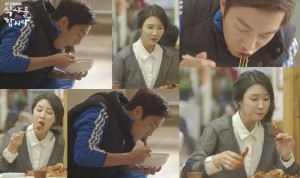 No other show best encompasses this situation than tvN drama Let’s Eat. The drama focuses on the portrayal of the female character played by Lee Soo-kyung, a 33-year-old divorcee who is actually happy to be living alone. One of her pleasures in life is food. Goo Dae-young, played by Yoon Doo-joon, a member of BEAST, is another foodie who lives alone, too. The drama focuses on building relationships between strangers through having a meal and ultimately relieving their solitude.

Let’s Eat showcases one of the highlights in Korean eating culture: sharing food. Sharing meals with a significant other is a big part of Koreans’ daily lives. Interestingly, the word ‘family’ in Korean loosely means “those who eat together.” Eating, therefore, is very much viewed as a familial or communal activity. It is quality time when love is shared and conversation flows. In Let’s Eat, the characters all live alone but suddenly discover that sharing meals together has helped them all become like a surrogate family of sorts to one other.

It is the same case with variety Three Meals a Day. The show isn’t about simply cooking and eating; it’s a bit more then that. It is about two guys with no family connection whatsoever forming a bond through eating and cooking together. It is that sense of shared efforts for food, and it also happens to bring laughter in the process. Perhaps, that feel-good atmosphere in creating and sharing food that has Korean audiences tuning in to watch every Friday night.

Lee Soo-kyung, Yoon Doo-joon, Lee Seo-jin, and Taecyeon are lucky enough to have met one other and share the same passion for food, but the question now is how about other Koreans who cannot find friends to share meals with? Well, more and more Korean people have found the solution online, specifically tuning in to live streaming TV channels where they watch other people eat. This has led to the growing culture of meokbang. Meokbang is an ongoing online trend of watching hosts or broadcasting jockeys (BJs) eating food with much vicariousness on live stream. These BJs, who can earn up to $9,000 per month, eat $100 worth of dinner in front of their thousands of viewers each and every night. Meokbang, which literally means “eating well on screen,” has transformed eating from an individual act to a social platform for all of society to watch. These BJs and their online viewers might eat alone in the physical space, but through the virtual world they are sharing and eating at the same table face to face.

Take, for example, “The Diva.” The Diva — real name Park Seo-yeon — who quit her daytime job at a consultant’s agency to focus on her nighttime feasts, claims that she makes over $9,300 a month. A third of her income is spent on purchasing food for her show. Park can easily polish off four large pizzas or three kilograms of beef in just one broadcast. Her fans tell her that they really love watching her eat because she does so with so much gusto and makes everything look delicious. In one day, she can find that she is in fact sharing her meals with hundreds, if not thousands, of people who all look to her as their dining company. It’s gastronomy voyeurism on another scale.

The growing trend of meokbang, and the resulting gastronomy voyeurism, has also indirectly attributed to changes in the popularity of hanshik. Hanshik refers to a term encompassing the variety of Korean cuisine. With their daily changes in menu, meokbang BJs have ignited and popularized a variety of Korean cuisine that audiences otherwise might not have considered before. It has compelled many of these audience members to try out foods presented by these BJs, hence the rise in the number of people eating in restaurants. One study found that the proportion of people who eat in restaurants (including take out and home delivery) more than once a day rose from 6.5 percent in 2012 to 31.7 percent last year. It is not a coincidence that the spike in eating out corresponds with the rise of meokbang trend since last year.

Now, the surge in the number of people eating out might mean different number of things. One of them is that people are shifting away from casual home cooked meals to professionally prepared meals. Arguably, it is a sign that more and more Koreans are in search for more quality foods. It also means that appreciation for good cooks or chefs is also on the rise. That might explain why cooking battle competition on TV piqued a growing interest in the public. It is certainly true for shows, such as O’liveTV’s The Battle of Korean Cuisine.

The Korean government also has done its fair share to make Korean cuisine more popular. The government has invested $40 million in campaigns with the hopes of making Korean food one of the world’s top five favored cuisine by 2017. Korean cuisine is now recognized as one of the most prominent movements in the global cuisine scene. There are now about seven Michelin-starred Korean restaurants in the world from zero just three years ago. Korean cuisine is catching up fast with French and Japanese cuisine, the two undisputed leaders of the gastronomy world.

It seems that there have been both accidental and concerted efforts by all the players, be it meokbang BJs or the government, to elevate Korean cuisine into a popular culture. Perhaps it won’t be long before we find that the next wave of hallyu coming not from SM, YG or JYP but rather from hearty plates of Korean foods.