Dreamcatcher Enchants In "You And I" 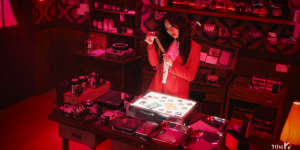 Dreamcatcher has consistently presented interesting concepts from the group’s reboot with a distinctive hard rock sound and commitment to eerie MV plotlines. Their most recent comeback, “You and I” is true to theme and their new mini-album rounds off their series of nightmarish releases. This time around, “You and I” fleshes out the backstory to the unique and expertly executed horrorverse set up in previous releases.

The “You and I” MV is set in the established multiverse of mirrors, nightmares, and horror movie tropes and the sound is similarly committed to previous influences of hard rock and metal. The dramatic piano-driven instrumentation is a welcome departure from current trends and sets the group apart in an undeniable way. The tension of the story perfectly matches the escalating pace of the music and as the song climbs to higher levels of intensity, so does the video. Even Dami’s rap break which could easily break the tone, is skillfully integrated so it all comes across as a seamless execution of an established concept.

The MV opens with Yoohyeon running towards a wormhole in a snowy fantasy realm and quickly references visuals from previous videos, establishing this story takes place in the same gothic horror universe as their previous work. The group photograph from “Chase Me“, and mirrors from the other MVs appear before the new plot is set up. While “Fly High” was a narrative prequel to “Chase Me” and “Good Night”, “You and I” seems to occur after “Fly High” but before the rest of the videos. 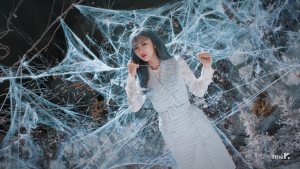 “You and I” deals with the fallout of the Yoohyeon killing the spider in “Fly High”. The spider takes the form of a woman who appears to possess her in the later part of the MV. Yoohyeon’s possession and Jiu’s attempt to exorcise the spirit from her is told in non-chronological order with the added conflict of internal struggles between the members being shown.

Where previous MV’s have involved outside players, this video presents more tension within the group. Siyeon’s character takes on a sinister role, developing pictures of the members that were used to imprison them. The collective conflict is disturbed by the character of the spider that entraps Yoohyeon and Handong. The members are shown together during the scenes of the exorcism but the ritual only actively involves Yoohyeon and Jiu. 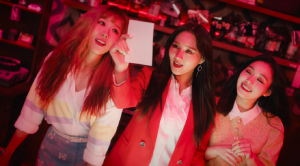 The horror elements are expanded on masterfully in this installment of the story, by enriching the group narrative while presenting an outside enemy. The audience is shown the “light” sides of the members are inhabiting the snow world, while their nightmare versions are in the house. The black and white costume changes in the house and parallel dimension during the choreography sequences drive the point home in a subtle way. This attention to detail has been a consistently excellent element of world-building that’s seen in the group’s other MVs as well.

The choreography is conceptually consistent as it integrates “magical” elements when Dami performs a trick with a cane and the other members use handkerchiefs as props. The group tying the kerchiefs around their necks adds a sense of menace to the performance. It has the tone of a magician’s act and allows them to carry the mystical feeling of the video to live shows. The choreography doesn’t only relate to the song but also satisfyingly fits into the broader supernatural concept of the comeback.

“You and I” shows off many of the best parts of what has set Dreamcatcher apart from the crowd: attention to detail, commitment to a concept, uniqueness, and musicality. To see this level of excellence is gratifying particularly when a group is working with a smaller fanbase and company. Dreamcatcher’s previous releases have been lauded by critics but have not found the kind of mainstream popularity they deserve. Hopefully, this comeback will have popular audiences bewitched by the quality of their work.