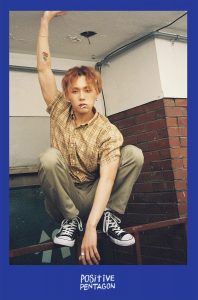 Pentagon have shifted through a kaleidoscope of sounds since their debut from Cube Entertainment with the funk-tinged “Gorilla” in 2016. Since then, the ten-member group have slowly solidified their status as idol-producers, collaborating with Flow Blow on their most recent EP Demo_02 to concoct a uniquely dreamy take on hip-pop. Returning this week with “Shine”, the title track from new mini-album Positive, co-composers Hui and E’Dawn prove their creative chops by reworking some of K-pop’s trendiest sounds into an infectious jam.

Speaking of E’Dawn, Pentagon’s main rapper takes centre-stage in this MV with his own brand of quirky charisma grounding the track’s youthful but slightly off-kilter vibe. The MV’s opening is reminiscent of both the piano tableau Wanna One created in “Energetic” and J-hope‘s mimicking a DJ’s scratching to kick off BTS’ “Mic Drop”. E’Dawn sets the tone for “Shine” by tapping out the song’s opening chords, before comically clearing his throat to launch into the first verse. The camera tracks his steps, to reveal the rest of the group and “Shine’s” modus operandi as a performance MV. It’s a smart choice, allowing Pentagon to demonstrate not only their slickly choreographed formations, but also release their energy full-throttle.

Although the MV’s bubbly vibe is another step in the group’s gradual shift towards a softer image, Pentagon haven’t forgotten their swagger. The performance segments are shot in a style we’ve seen before with one-take styled videos such as EXO’s “Growl”. The members direct the camera to focus in on whoever’s taking that line, while the choreography flows along with the tracking shots to make the transitions between sets appear effortless. 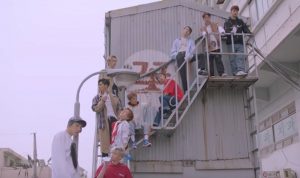 Once it finds its groove, “Shine” barely slows down, as the boys bounce their way between a variety of dilapidated sets that serve to accentuate the crazy cute rainbow of styles happening here. It’s kind of like school uniform, if you dug all your kit from the local thrift store and threw it on blindfolded – but better yet, it works. I think this is the first time I haven’t seen a K-pop band styled to perfection. E’Dawn’s hair falls haphazardly into his eyes, Kino may or may not be sporting goggles – but the chaos fits the messy, youthful vibe of the song just right. It also ties in with the lyrics, as the boys lament that their hopeless crush.

I’m a loser who loves you

To you, I’m a nuisance, I’m an outsider

But in this world, I only need you 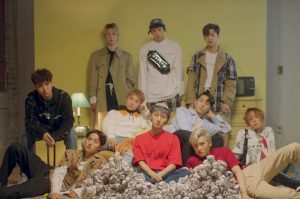 Without meaning to diss their style, the shabby school uniform, mixed with the cute doodle-esque graphics and cheeky snatches of humour peppered throughout renders this music video one of the most realistic and relatable takes on K-pop’s omnipresent lovestruck concepts that I’ve ever seen. The repeated motif of the crumpled letters culminating in the members sending paper planes shooting straight towards the viewer is a sweetly stylized riff on the song’s exploration of a secret crush. From Wooseok opening the locker to find Jinho squatting inside with his snacks, to the pretty pink flowers sprouting from E’Dawn’s shoes and the sly shout-out to the group’s fan club Universe in the final chorus, “Shine” has a new surprise at every turn, and Pentagon are more than up for the challenge of serving them with a generous dollop of aegyo and seemingly endless energy. It’s a riot.

The song itself takes on the minimalist, percussive hip-hop sound that has captured the current K-pop zeitgeist and turns it into a refreshing feel-good jam that’s catchy as hell. The track is structured around a central driving piano loop that anchors the song’s jagged melody, with a bright brassy beat and some funky cow-bells layered on top. But the production is merely a backdrop to Pentagon’s vocals, which elevate this song to far more than the sum of its parts. There are enough members in the mix to allow the vocalists to change up the delivery of each chorus and play off one another, keeping the energy level building throughout. 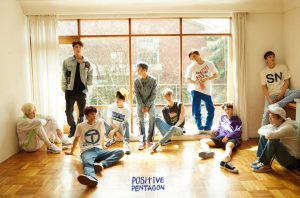 The lynchpin of “Shine” is its discordant central hook, that disrupts the flow of the song just enough to pop with being overpowering. But it’s the power of the members’ harmonies juxtaposed with the stark simplicity of the production that makes “Shine” stand out. It follows the hip-pop trend already well-trod by other groups such as iKon, yet Pentagon pack their title track with oodles of effervescence and enough pure eccentricity to rise above the rest.

Pentagon have smartly taken this opportunity to ride K-pop’s latest genre trends to reach new listeners, while subverting a worn-out concept to offer their own refreshingly trippy take on puppy love. Two things are certain – you won’t be able to escape this song’s intoxicating bounce – or shake the image of Jinho snubbing Kino’s sunset-themed confession – for a good while yet. Don’t say I didn’t warn you.