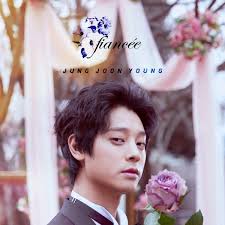 Jung Joon-young is one of those artists whom I’ve always meant to check out, but never quite managed to. Ever since his appearance on Superstar K4, we’ve been musical ships in the night. However, when he came back with his new single “Fiancée” featuring Microdot, I was determined to give it a listen. And judging by “Fiancée”, I have been missing out.

“Fiancée” is great slice of pop rock, showing influence from both the alternative and soft rock scenes. There’s a swirling whorl of conflicting emotions as Jung Joon-young pinballs from lovestruck to apologetic to desperate and back again, all tinged with pain over a relationship that’s clearly not going too well.

The dynamic of the relationship veers towards unhealthily codependent, at least on Jung Joon-young’s part. The lyrics are all about how much he loves her, how he needs her, and that he depends on her, while remaining mum on what he can offer the girl he’s proposing to in terms of matching the emotional stability and support he’s demanding from her. The phenomenal vocal delivery leaves no doubt that the love Jung Joon-young feels is genuine, but it comes off as needy and self-centered.

That selfish love is only enhanced by the MV. There are two distinct styles to the cinematography and lighting: one hazy and out of focus, the other sharp and clear. The dichotomy and ensuing contrast of the two styles provides two mental states Jung Joon-young is living in: memories and reality.

For the most part, the fiancée only appears in the hazy scenes of the MV. We’re not shown the big, grand moments of their lives together, but snapshots of their domestic, everyday lives–drinking tea, smoking, and the fiancée filming Jung Joon-young with the camcorder that is she nearly always has on hand. It’s blissful and idyllic; a glance into a perfect relationship. Even the perpetual smoking adds to the romance, as it brings to mind the image of seeing someone across a smokey bar; an old-fashioned hallmark of true love.

The reality shots, however, show Jung Joon-young alone and miserable. He’s commiserating on what he’s lost, and attempting to drown his problems in booze and tattoos. Yet it’s implied that this lifestyle is not new, and is what cost him his relationship. Two of the occasions where we do see the fiancée in reality show her taking his drunk self home, and confronting him over a handgun he purchased without her knowledge. Furthermore, even in the pleasant memories, we never see the fiancée on her own. Hell, we never even see her face. She remains hyperfocused on Jung Joon-young and Jung Joon-young only. In his own mind, the best thing he remembers about his ex is that she was all about him. 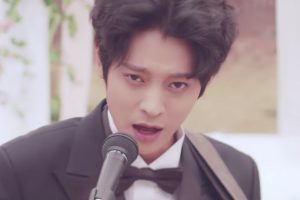 This makes the staged wedding at the end feel like an expansion of the memories rather than reality. It is shot in both styles, but the absence of people imply it as a daydream, a hopeful glance into the future as Jung Joon-young sees it, and a sharp indication that it will never happen. He may love his ex more than anything, but he wants a relationship that is all take and no give; something she cottoned on to and likely bailed over.

“Fiancée” is the rare song that is both sweet and sad, earnestly lovestruck and utterly toxic. It highlights that it’s not just love that makes a relationship; it’s how that love is shown. Show it poorly, as Jung Joon-young does, and it will not last. Commitment matters little if you’re committing to something unhealthy.