Up10tion has returned with their first full-length album after years of building a reputation as one of the most underrated idol groups in the business. They have a decent string of solid EPs to their name, exploring different genres competently but never really finding a signature sound. Invitation falls into a similar category as a collection of quality tracks that try different things, but aren’t as artistically coherent as you might expect.

Up10tion’s ability to comfortably navigate popular music trends is a great skill and they demonstrate it admirably over the longer album format. The group’s biggest weakness is a lack of a recognisable sound. In other groups, adherence to a “signature sound” feels repetitive but some artistic consistency would be welcome if only to make them more memorable. Right now, without a trademark, Invitation runs the risk of being forgettable.

The biggest weakness of the album is, in another way, its biggest strength. It is a collection of well-executed songs, over different genres, appealing to many different tastes. There are upbeat, dance tracks, more hard-hitting electro-rock songs, and a decent number of ballads showing off the vocal chops of the members. If you’re looking for listenable, consistent, commercial idol music, then Invitation may be for you. It’s not a concept album by any means but there is more than enough strong material for an enjoyable time.

Refreshingly, the majority of the music isn’t retreading current trends aside from some exceptions: “Mixed Signals” dips into the tropical house sound complete with dolphin synths and saccharine harmonies. It’s not unpleasant, but not entirely necessary, and it’s one of the weakest tracks on the album.

“Always” is a more successful interpretation of current electro trends. The lush instrumentation and electronic sounds are more intuitively integrated. It ends up sounding bright and catchy, while the buoyant delivery of the lyrics keeps it from being too twee. It’s one of the easiest tracks to repeat and remember, in most part, due to the earworm chorus.

A lot of the songs stick firmly in high-octane pop territory as Up10tion is able to deliver energetic vocal and rap performances.”Superstar” and “Lovesick” are both powerful examples of how the group can match the energy of the intense instrumentation. The funky bassline and fascinating guitar riffs in “Lovesick” are used sparingly alongside whispered ad-libs that are urgent and sexy. It’s a much more compelling song than the title track, “Candyland”, that doesn’t truly hold up to most of the rest of the album.

“Candyland” is a little generic in sound. It’s well produced and performed, but it’s not as good as some of the more experimental songs on Invitation. The video has some quality group choreography but is light on plot and isn’t that interesting. It falls into a similar pattern to most of the group’s other videos: a lot of dancing interspersed with individual member shots. It’s not as successfully executed as previous MVs like “Going Crazy” and “Wild Love”. The concept isn’t as strong and the visuals are not as dynamic as before, despite the strength of the group’s performance.

“Candyland” isn’t bad despite slightly cringey tropes like the English spoken introduction and odd references to addiction and danger contrasted with sweets. The lyrics don’t make a whole lot of sense despite liberal references to chocolate and sweetness. There’s no consistent metaphor to explain what the “Candyland” is, and it’s a little silly if you think about for too long:

Melted chocolate fondue
You swim in it.
Do not worry about anything.
I’ll do it if you want.

“Candyland” is probably the least successful song, lyrically, on the album. The rest of the lyrics don’t really push conceptual boundaries, but some of the songs can be interpreted in different ways: “Habit” could be a lament to the hardships of chasing a dream as much as a ballad for a lost love. Most of the tracks are pretty straightforward, and this seems to work better than forays into elaborate metaphors. 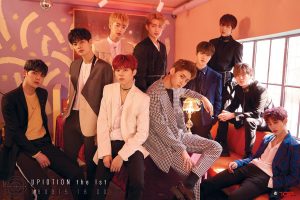 Up10tion is definitely a competent K-pop group and they showcase many strengths when they’re given challenging material. Their versatility is impressive. Invitation has enough variety that it should appeal to a wide range of listeners, but it would have been interesting to hear something more creatively cohesive from the group. Rather than an entry to the world of Up10tion, Invitation sounds like a generally unconnected selection of radio-friendly tracks. Hopefully, their next effort flexes their conceptual muscles and pushes them from good to great.