CLC Fails to Hold Their Own with "Black Dress" 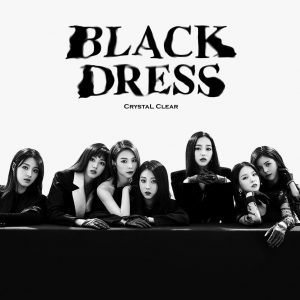 It’s been nearly three years since CLC’s debut, and since then, they have been busy with consistent bi-annual releases. To kick off 2018, the seven-membered group dropped their seventh mini-album titled Black Dress. While the latest release features a strong girl crush concept, CLC has pretty much experimented with every concept out there, from cute and innocent to mature and retro-inspired. Although this exploration has certainly showed off their diversity, it has set the group back in developing their own sound. Ultimately, their struggle in developing and establishing a cohesive identity is reflected in Black Dress.

For longtime listeners, the eponymous title track, right of the bat, is reminiscent of “Hobglobin” from a few comebacks ago. Featuring a heavy mix of electronic and synth beats in line with the stronger and darker concept, the gentler pre-chorus is effective in building up the beat drop to the strong chorus — very similar indeed to “Hobglobin” and even 4Minute tracks with similar girl crush themes. 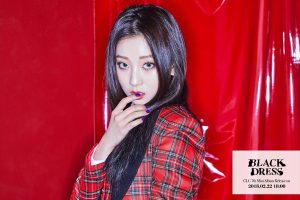 It’s completely alright to have similar concepts that build on each other to develop a group’s style — in fact, this is exactly what CLC is lacking right now — however, the group seems to revert back to yet another version of a previous release and fails to show much-needed growth. As their performance track, it is the right choice — it is definitely an exciting hype song that will allow room for the members to showcase their moves with the perfect amount of attitude, but as the lead single, it falls short in adding to CLC’s individual style.

Unfortunately, the rest of the tracks don’t manage to achieve that either. “Like That” is a good choice to follow up with “Black Dress”: it has a milder, gentler style that is seamlessly incorporated with the EDM aspects of the track. The rest of the album, however, takes on a drastically, almost confusingly, different style. “Distance” is your typical nostalgic ballad, while “To The Sky” takes a turn as an upbeat dance track. 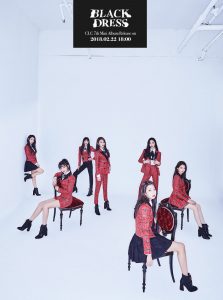 Finally, “7th” starts off as like a Disney ballad instrumental (is that just me?), and quickly transitions to a relaxed jazzy piece with hints of bossa nova with the guitar accompaniment and swaying samba-inspired rhythm. On their own, the songs are solid pieces — I was very pleasantly surprised by how strong their B-sides are, especially “7th” which is a rare gem in the K-pop world considering its unique mix of genres; but together, they just add to the overall discord and confusion.

I expected more from CLC as an experienced group. It is likely that they went back with a girl crush concept after their international success with “Hobglobin”, but at this point, “Black Dress” could be given to any generic girl group and it honestly wouldn’t sound out of place. The lack of cohesion in CLC’s overall discography could be attributed to the group’s mismanagement — they seem to try out different concepts in the hopes of hitting it big with one of them, but at this point in their career and considering past criticism of the group seeming too much like their former labelmate 4Minute, CLC really needs to find their own identity and character that will set them apart from all the other girl groups in this ever saturated industry.