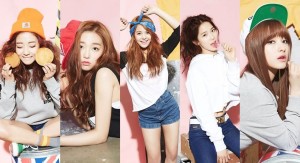 Cube Entertainment is starting 2015 off right. First, 4Minute released their best work in years, and Cube is following it up with the debut of their new girl group Crystal Clear, aka CLC. The new quintet has some big shoes to fill, as their company sunbaes are the aforementioned wild ladies or the sweet starlets A Pink. Shockingly, CLC’s debut  “Pepe” manages to sound different from both. The fact that it’s a good song is the cherry on top.

“Pepe” is an incredibly strong debut song. Hell, it’s an incredibly strong song period. “Pepe” is a very well constructed song laden with old-school throwbacks. It’s a very jazzy piece, built on the back of a wonderful intermingling of piano and brass. There’s a great mix of saxophone, trumpet and a smidge of trombone. Yet, the instrumentals never overpower CLC’s vocals.

Admittedly,  the expectations for CLC’s vocal skills were a bit low, as Cube’s groups as a whole aren’t top tier in terms of vocals. However, those expectations have been blown out of the water. CLC has some serious vocal chops, and “Pepe” really works to show them off. Seunghee, Sorn and Seungyeon all have rich, powerful voices that meld with the instrumentals for a very lush sound. Rapper Yeeun is a bit too much like Hyuna in her delivery, but she’s serviceable and doesn’t detract from the song as a whole. Aiding in that is the emotion that all three display. CLC’s delivery carries the message of “Pepe” across with no questions. 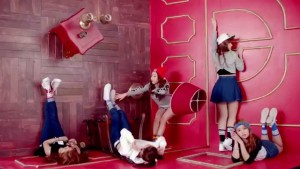 The message in question is “I am so done with this relationship,” and CLC does a great job with it. The lyrics make it clear that this guy needed to go. He was clingy, needy and none of their friends liked him; basically, CLC’s only regret is not ditching this guy sooner. Their richer vocals combined with the old-school production lends a gravitas to “Pepe” that would otherwise be missing from a song about dumping someone. The mature sound reinforces the attitude CLC holds about this guy not being worth their time by juxtaposing their maturity against their ex’s juvenile antics.

Sadly, while the song is a slam dunk, the MV for “Pepe” is quite a mixed bag. There are elements that really work with the song, and there are ones that really don’t. The biggest issue is the color palette. The MV is crammed full of bright vivid colors that clash with the more restrained, controlled aura of the song. Some of the sets still manage to work, most notably the black and pink ones, as they pick up on the darker edge and femininity of “Pepe.” The abstract, rotating sets work as well. It’s not clear why, but there’s an inherent mesh between the literally off-the-walls sets and the tight control of the music. The others, though, are far too bright and girlish to match the tone of the song. 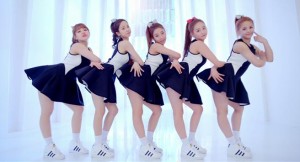 The styling is the other issue predominant in the MV. “Pepe” is a song with maturity and gravitas. The tone demands a certain amount of feminine polish and class that is absent from the ladies’ wardrobes. Instead of the young women the song portrays, CLC are dressed as girls, in school letter jackets or distinctly loose dresses. Anytime they’re not, the quintet appears to be rocking 4Minutes’ castoffs. Neither of these looks are bad, but they just don’t match the tone or lyrics of “Pepe.” This has the unfortunate effect of dragging down a really good debut because the visual elements are in disarray.

CLC has definitely set the bar for 2015s rookie girl groups. They have talent, they have charisma, and they have a good debut song in “Pepe.” I sincerely hope that CLC continues in their jazzy direction, and wish them the best of luck.