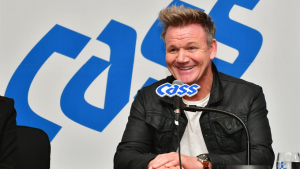 When thinking about chefs turned celebrities, one can’t help but thinking about Gordon Ramsay. This Scotland-born chef shot to fame in the early 00s thanks to his variety show Hell’s Kitchen and owns around 50 restaurants worldwide, awarded with 16 Michelin Stars. Having starred in popular shows broadcasted all over the world such as Kitchen Nightmares and MasterChef, Chef Ramsay’s popularity knows no limits.

Recently he has endorsed Cass beer in Korea, and spent some time in Seoul promoting both the beer and himself. Given that Gordon has always been knows as someone pursuing culinary perfection, this advertising made more than a few Koreans raise an eyebrow, since many think Cass beer is poor in quality. At this point, has chef Ramsay given up on his strict standards for the sake of fame, or are Koreans too harsh on their own local product?

What people all over the world love about Gordon Ramsay has undoubtedly a lot to do with his ferocious temper and blunt personality. This chef surely isn’t afraid to use strong language and this has become somehow his trademark. Chef Ramsay might be exaggerating his outbursts for the sake of television, but one thing is for sure: he started a trend and cooking shows are now very popular everywhere. Once again Korea, with its healthy and tasty cuisine, is no exception. While the use of expletives is virtually non-existent, there are several celebrity chefs and cooking shows the Korean public is familiar with. 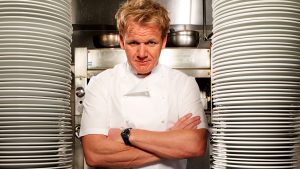 Perhaps the most well known Korean chef is Baek Jong-Won, who got popular thanks to the several franchises he owns (such as Paik’s Coffee) and through My Little Television. With his show Mr. Baek: The Homemade Food Master he tries to break through in an elementary way the secrets of home-cooking for helpless men. He’s well known for his simple dishes, easy to try and cook for the viewers as well.

Then there is the show Please Take Care of My Refrigerator, where Gordon Ramsay himself will appear early this December. In this show, a guest’s fridge gets scrutinised and cleaned up. After that, two teams of chefs will cook two dishes selected by the guest in 15 minutes, using ingredients found in the fridge only. Several idols and celebrities have guested on the show through the years, as proof of its popularity.

The Korean government has wisely been pushing food as another way to promote the country’s culture and tourism. It becomes clear when foreign celebrities are visiting Korea to promote and rich plates of delicious Korean Food are offered to them. Sometimes TV shows authors can take things a little too far, making foreigners try food that’s hard to eat even for Koreans themselves for the sake of sensationalising . It’s Chloe Moretz’s case, when she was fed pupae and live octopus — which she ate with a smile. 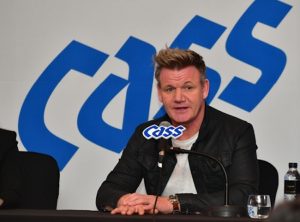 At the same time, while for Koreans kimchi is a staple food, one that they can’t live without even abroad, not all foreigners enjoy it. It could be the same for Cass beer: while Koreans don’t swear by it, foreigners might enjoy its light taste that doesn’t overwhelm the one of food. It has already been mentioned that Gordon Ramsay is a vocal and upfront chef, he has no interest in ruining his reputation by advertising something he dislikes himself. In fact he even spoke in defence of Cass beer:

“I have fallen in love with Korean food, and it doesn’t need to have an oversophisticated, slightly unique beer that costs a fortune,”
“The authenticity of Korean food with the [Cass] No. 1 beer for me felt like a perfect match. It‘s by far the freshest, coolest … and also in these difficult times, with the economy in recession, it is a beer that can easily be bought and have some fun with. It’s not pretentious.”

Also, it has to be considered that recently the Michelin Guide for the city of Seoul has been published, among the controversy of KTO (Korean Tourism Organisation) funding Michelin to give restaurants positive reviews and stars. Michelin Guide is famous for being very strict and reliable in Europe, but giving away stars way too easily in America and Asia. 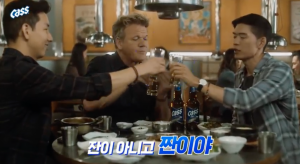 With a total of sixteen Michelin Stars received in his restaurants world-wide, Gordon Ramsay might be the right person to improve the image of Korean high-end restaurants and promote Korean Cuisine at the same time. Gordon’s Cass endorsement could be a stepping stone for a concretely bigger project: he’s hinted at his ambition to extend his franchise to South Korea. Opening a restaurant in a country that keeps on growing, but also cherishes its culinary roots —such as Korea— would be very prestigious for Chef Ramsay.

Tastes are debatable and strictly personal; while some Koreans might not enjoy Cass the most, there will always be people who like its taste. As much as Cass beer might be good and Gordon Ramsay’s appreciation for Korean food genuine, his main purpose is probably to be introduced to the public, in light of an eventual restaurant opening. This is not necessarily something bad, it can be beneficial for Gordon, as previously stated, for Cass in terms of improved sales and also for Korea, that is likely to have one of the world’s most famous chefs open a delicious restaurant in there.