Day6's "I Like You" Plays To Their Sentimental Strengths 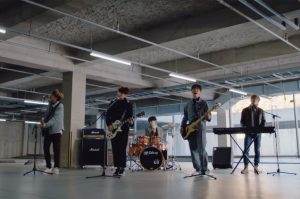 Putting out new songs along with an accompanying professionally-shot MV for 12 months straight is more than just a feat for any group. It’s finally December and we have about 20 more sleeps till the new year, which means that Day6’s 2017 year-long Every Day6 project has finally come to an end. While some of their latest releases might have been a little hit and miss, I’ve got to admit that I did look forward to the start of each month for their new releases.

To wrap up their year-long rollout, Moonrise, the second full-length album and the more forlorn half to Sunrise, boasts an array of tracks which mostly revolves around the topic of love.

Mustering up the courage to confess to someone you have feelings for is always an endearing phenomenon to behold. Regardless of whether acceptance or rejection awaits, what’s most remarkable would be the brave step taken to be fully transparent with your feelings with the person you love.

The title track “I Like You” is a soft rock song that follows the emotional build-up towards the declaration of kept love and hidden infatuation, and the boys have done a spectacular job in capturing the essence of a vulnerable love confession. It’s nothing over the top, but that might be exactly what they were heading for – akin to how love isn’t always shrouded in volatility.

The song starts out relatively unadorned with the keyboards by Wonpil and Dowoon on the drums. Then comes in the guitars and the song starts to pick up its pace with a comfortable softness encapsulated in its musical texture. The track only starts to swell with a sense of enigmatic explosion and dynamic flair upon reaching the chorus from the formal and almost heart-wrenching statement of “I like you.”

The chorus is everything you would expect from a sentimental rock ballad, splendidly cinematic and ardent in both sound and emotion at their finest. The build-up to it is brilliant, though this isn’t the show-stealing element of the piece. Instead, the potent weapon that packs a punch to the song would be Day6’s stellar vocals. I know their vocals have been commended over and over again, but “I Like You” is a true testament to their all-rounded skills and emotional strengths.

Young K, Sungjin and Jae take the reigns of the fervent chorus, taking turns to belt out the confession, without forgetting to add weight to their raw emotions alongside the sentimental lyrics. “I Like You” is a type of song that not only draws on their rich vocal tones to create an emotive soundscape, it also highlights the most of Day6’s capabilities.

In comparison to their previous MVs, the imagery here is far more light-hearted, yet it is exactly this simplicity that evokes understated tugs at the heartstrings. There are two characters in the MV; we see the female lead busy carrying out her duties at work while the male lead has a determined expression on his face as he climbs to the rooftop to prepare for his confession.

After he has everything in place, he texts her to tell her to look out the window. He then proceeds to lower a giant blow-up heart with the phrase “I like you” printed on it. She gazes at the heart in disbelief and finally lets out a heartened smile after realization hits her.

While the MV itself is simple indeed, the lyrics are nothing like it. Written by the all-rounded Young K who has also been writing most of their recent songs, the lyrics for “I Like You” particularly paint a sincere and heartwarming declaration of love.

Now I can tell you
I want to love
You

It’s understandable that some fans have expected a groundbreaking rock track in the vein of “I Wait” to herald the album, but Moonrise does take on a softer and more melancholic approach, thus “I Like You” is definitely fitting to mark the closure of the project.

However, as polished as “I Like You” sounds, it would have been more impactful if we weren’t already accustomed to the same formula used several times over. In certain aspects, the musical sentiment of “I Like You” harks back to February single “You Were Beautiful”.

Nevertheless, I liked “I Like You” the moment I heard it in the teaser – it’s a mellow take on their smashing debut hit “Congratulations”, in which I believe is still Day6’s best song. I can also imagine “I Like You” as a closing credits song, where a series of nostalgic flashbacks are pieced together to commemorate a good run.

At the end of the MV after the credits roll, there’s a caption that states “The show must go on,” hinting that there will be more in the future and we should look forward to Day6’s future releases.

Bittersweet at the very least, “I Like You” seals their 12-month continuous rollout on a pleasant note. Day6 certainly had a fruitful 2017 with a spate of good releases, and I’m sure that they have far more dynamic tracks up their sleeves in the near future. As we bid farewell to a productive year, we anticipate better music, more stories to be written and happier memories to be made in the following chapter.