Red Velvet Perfects the Creepy and Cute in "Peek-A-Boo" 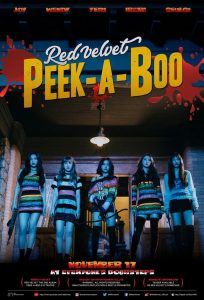 It hasn’t been very long since the ladies of Red Velvet dominated the K-pop scene with their last EP, Red Summer which brought us the fun and quirky jam, “Red Flavor.” Now, just nearing four months after their summer hit, Red Velvet makes a grand return with one of their most eccentric and whimsical songs to date with “Peek-A-Boo.” The song, accompanied by an eerie yet delightful music video, helps propel the group as an aesthetic and artistic pleasure while simultaneously solidifying their dominance as one of K-pop’s top girl groups.

“Peek-A-Boo” is the title track of Red Velvet’s second full-length album, Perfect Velvet. The song is an up-tempo pop song with a smooth synth melody and a fast-paced drumline that converges perfectly with a harmonious and addictive hook chorus. The playful instrumental and the high-strung beats flawlessly parallels the tone of the song’s narrative as Red Velvet sings about a love interest and their pleasure in teasing and flirtatiously taunting their crush to get them within their grips. The song’s lyrics come off a both amusing and charming as the girls sing:

Play the game again
Let’s press the button, hurry like kung fu
Don’t be surprised even if I change my mind
Aren’t you attracted to me? Then excuse me
Call me, let’s go play all night

Lyrically, “Peek-A-Boo” unfolds like a cat-and-mouse game in which the girls don’t want to blatantly express their interest to their crush so instead, they settle for playing hard to get. They present themselves as seductresses who indulge in the adventures of game playing and schemes. This is made more prevalent with the fantastic music video that accompanies “Peek-A-Boo.” In the visual, an unlucky pizza delivery boy finds himself trapped inside a mysterious and eerie home which is occupied by the alluring fivesome who also happen to be murderers with a distinct kink for delivery boys.

The Halloween-esque video is reminiscent of labelmates Shinee‘s 2015 visual for their track, Married to the Music which along with “Peek-A-Boo” emits a creepy and unsettling aura while dualistically conveying pure and quirky vibes. In fact, the ladies of Red Velvet all exude an ominous presence that is heightened by bold red costuming and contrasted with rainbow-colored attire. The dance sequence that is nestled throughout the video also helps the song’s narrative by showcasing a key point in the performance in which the group puts up a peeping “OK” sign that symbolizes how intently focused they are on the target of their devotion. 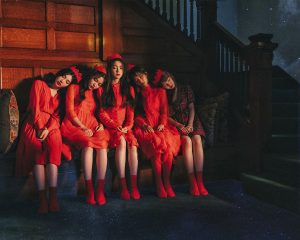 Red Velvet’s ultimate target is revealed as the pizza boy who is lured and trapped while on route for delivery. He is quickly tricked into playing various games with the girls while the narrative slowly reveals the empty pizza boxes and several workplace uniforms that are kept in display as memorabilia and trophies from Red Velvet’s previous successful hunts. As the delivery boy slowly starts making this unsettling discovery, he attempts an escape while the viewers catch glimpses of Red Velvet’s love for weaponary and black magic.

While the delivery boy thinks he has made a clear escape and makes a call for help, the ladies of Red Velvet are always two steps ahead and thus are able to obtain what they desire in the end. From the last shot in the conclusion of the visual, there is a sign reading “Missing delivery boys” which only adds the ambient atmosphere of the video and confirms the viewer’s suspicions of Red Velvet’s deeds. One can’t help but categorize the music video for “Peek-A-Boo” as both creepy and captivating, making this a perfect blend for slightly disturbing fun.

Red Velvet’s “Peek-A-Boo” is a visual trance with an original and entertaining narrative that makes it a perfect song to round out the new year. Each member captivates the screen with their presence and their vocals shine in harmony and arrangement. Red Velvet certainly has another hit in their discography and are only adding to their aesthetically and enthralling musical spectacles that they have created thus far.