Because This Is My First Life, Episodes 9-12: Kisses, Hits, And Misses 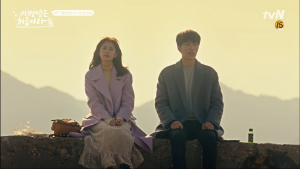 The biggest criticism one could level against Because This Is My First Life is the frequent plot twists that seem to come with every episode. It seems like every time something is set up as a consistency, the rug is pulled out from under the audience. This is sometimes a good thing, to maintain audience engagement but it doesn’t always work.

A recent plot twist gone awry is the reveal of Yeon Bok-nam’s innocence. While it makes sense for comedic purposes and allows us to enjoy the dimples of Kim Min-kyu for a few more episodes, it undercuts the subversive message of the stalker sub-plot. Bok-nam’s knowledge of Yoon Ji-ho’s situation is explained but his overtures to her are not fully addressed. It feels like an implication is being made that if you’re not kidnapping people with a spanner, constantly flirting with a co-worker after they’ve expressed discomfort is acceptable and it is not.

Bok-nam’s redemption is awkwardly executed but understandable if considering we’ve already had one serious workplace conflict so heaping trauma on Ji-ho would be overkill. If his character wasn’t innocent people might speculate Because This Is My First Life has something against young, handsome, charming men. 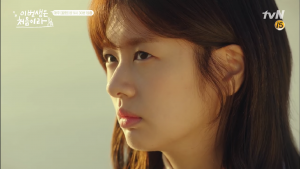 Another characterisation that falls short is the about turn in Ji-ho’s motivation. While her feelings for Nam Se-hee feel believable the discarding of her ambitions as a writer seem like a studio note to get the drama back to the formula of a romantic comedy. The brief explanations she gives to Se-hee and her friends about her dreams don’t ring true. It’s a massive cognitive leap expected from audiences to believe Ji-ho would dedicate a large part of her youth to an ambition to something she just found fun.

With Ji-ho’s shift, the focus has been changed from some of the more ambitious societal themes to internal struggles in interpersonal relationships. The difficulty is there seems to be a struggle to balance what is romantic with what should be challenged in heteronormative gender roles. A prime example of this is Se-hee’s mansplaining, which is lampshaded by Ji-ho’s irritation but after he uses it as a segue into the kiss at the beach it’s tolerated. 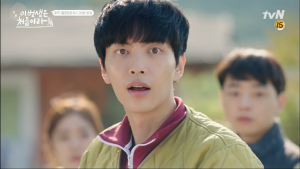 The series briefly touches on the question of labour between cishet men and women partners but their power dynamics are still off-kilter. Even with the equitable division of labour between them, their developing feelings are given the lion’s share of the screen time. The new dynamic should introduce complications when it comes to Ji-ho and Se-hee’s living arrangement and at least have the characters wondering what this means for their home. While the question of physical affection arises, no thoughts are expressed about the change introducing sex into a relationship that is only transactional would cause. Since money and how it influences relationships have been a consistent theme of the show up until now it should be confronted. Instead, we’re swept up in the whirlwind of hand-holding and dates without any thought of how this could impact the characters in a material way. 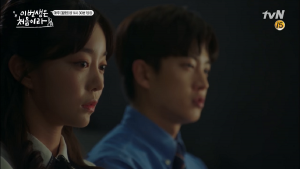 Interestingly, while Ji-ho and Se-hee’s characters are being driven towards familiar ground, the side couples are showing more range. Kim Ga-eun plays Ho-rang with heart-breaking sincerity as she tries to keep the increasingly unrealistic dream of marriage alive. Her performance outshines Kim Min-seok’s in intensity and variety but she’s given more opportunities to showcase her skills. Won-seok is written sympathetically but, like many of the men in Because This Is My First Life, his characterisation is less fully developed. Kim Min-seok does admirably with the material he’s given so Won-seok comes across as endearing and innocent rather than selfish and immature.

Yang Ho-rang and Sim Won-seok’s storyline has developed from broad comedy into a complex exploration of dating, marriage, and the desire for conformity. Ho-rang’s reasons for wanting marriage and Won-seok’s inability to fulfil her desires are set out in escalating interactions that gradually build to the seemingly inevitable conclusion of separation. The reasons for their break-up don’t look to be easily resolved so finding a happy ending for this couple should be an interesting journey.

Because This Is My First Life is still taking on important topics, particularly how part of the reason, heteronormativity and marriage are so desired is because of a need to fit into society. The drama is making some bold choices when it comes to characterisation and plotting but these are better realised in the subplots. The main storyline is definitely exciting but upon reflection, there are many loose threads left hanging. Balancing humour, social issues, and romance has been done well so far, hopefully this balance will be maintained in forthcoming episodes.