Because This Is My First Life, Ep 1-4: Patriarchy Sucks 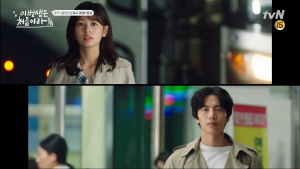 The promotion for Because This Is My First Life sets the series up with a classic K-drama trope: innocent cohabitation. The premise has been used with varying levels of wackiness in dramas like Personal Taste and Goong. The trope, in this case, is subverted to showcase the various ways in which patriarchy and economic hardships influence the material opportunities of women in various ways. The drama uses other typical set-ups to show how gender stereotypes can cause confusion and comically explores serious issues with a light touch.

The first episode opens with a birthday scene in which the lead character Yoon Ji-ho (Jung So-min) is nine years old and about to blow out the candles on her birthday cake. But before she has the chance to make a wish and blow out the candles herself, her younger brother Yoon Ji-seok (Noh Jung-hyun) does so and her father, Yoon Jung-soo (Kim Byung-ok), digs into the cake; the sequence of events is repeated across several birthdays. This scene introduces one of the major thematic elements of the drama: patriarchy asserting control over Ji-ho’s life. Ji-ho’s father takes her cake repeatedly after her brother ruins any symbolic ownership she has over important events in her life. This montage foreshadows the catalyst for her eventual expulsion from her family home, which leads to her living with the male protagonist, Nam Se-hee (Lee Min-ki).

Ji-ho is pushed out of the flat she shares with her brother after coming home from three months working as an assistant writer for television dramas in Seoul. She’s unsatisfied with the current state of her job, where she has to write product placement into the predictable scripts of the mostly unsuccessful dramas for her insensitive boss, Hwang Seok-jeong. When she arrives home, she hopes to relax and connect with her family and friends only to find her brother and his new, pregnant wife. Ji-ho’s ambitions for her time off are thwarted when she realises the apartment she financed will be given to her brother and his new family. Her inability to fight against this eventuality is compounded by the fact that Ji-seok’s wife is pregnant with a son. 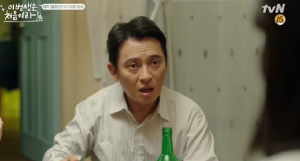 The interactions between Ji-ho and her family members are archetypical of a patriarchal household. Ji-seok is lazy and entitled but is played endearingly by Noh Jung-hyun. Kim Byung-ok is a scene stealer as Ji-ho’s dictatorial father whose moods are predictably volatile. Ji-ho’s mother, Kim Hyun-ja (Kim Sun-young) is elevated from the silent, dutiful wife and with only a few scenes is given enough material to make the viewer understand her love for her children and agency as a woman. She plays a submissive role within her family but she is by no means a flat or weak person. The sensitive treatment female characters in this drama are afforded is a major plus especially with surrounding players like Hyun-ja who could have easily been sidelined.

Ji-ho’s family dynamics are treated humorously but in a way that conveys the immensity of the adversity that she faces because of her father. Her only solace comes from Yang Ho-rang (Kim Ga-eun) and Woo Su-ji (Esom), her childhood friends. Su-ji and Ho-rang’s characters explore gendered difficulties in employment and relationships respectively. Su-ji is a career-driven, single woman who is pushed to take on extra labour at work to prove her worth but is excluded and objectified because of her gender. Ho-rang is happy at work but aspires to be married to her long-term boyfriend, Sim Won-seok (Kim Min-seok), whom she periodically fights with for seemingly arbitrary reasons. 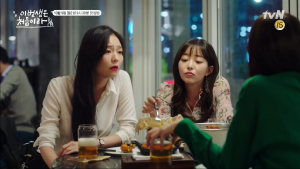 Because This Is My First Life does a great job of lampooning the workplace culture and social norms in South Korea. Su-ji’s storyline with her male co-workers illustrates how dynamics between men and women at work are manipulated to benefit men. Her co-workers objectify her and she puts up with it because they are senior to her and could hinder her success. They deny her access to social capital through exclusion from networking opportunities that happen at after-hours events but call her to deal with professional emergencies.

Excessive overtime in office culture is a key component to how the misunderstanding between Se-Hee and Ji-ho occurs, resulting in their living together for a week without ever meeting. Se-hee is a software designer for a social networking start-up company and his boss, Ma Sang-goo (Park Byung-eun) arranges for Ji-ho to live with Se-hee so he will be able to work longer hours. A series of miscommunications result in he thinking Ji-ho is a man and her thinking Se-hee is a woman. Se-hee’s character is written as a man who is unconcerned with expected social structures but rather communicates his expectations clearly and sticks by them. He participates in social events only as far as is absolutely required of him and Sang-goo makes a number of allowances to accommodate Se-hee’s whims. The treatment he receives is starkly different from Su-ji’s experience of being sidelined and exploited despite showing her professional capacity. 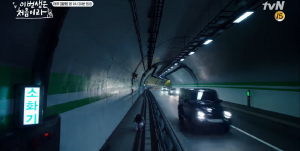 The depiction of Ji-ho’s experience in employment delves deeper into how sexism and particularly sexual harassment impacts women in the workplace. Ji-ho is assaulted by her coworker whom she has had a crush on for three years in episode two. The circumstances of the incident are relatable in that her assailant is known to her and not a stranger, he’s a man from work, and he’s someone who helped her out and whom she liked. The aftermath of the incident is also, unfortunately, a realistic version of events for many women. A large percentage of workers in South Korea experience sexual harassment and very few report these incidents to the police. Even in cases of sexual assault, victims often seek help from people nearby instead of making an official complaint.

Ji-ho is forced to make an incredibly difficult professional decision when she is gaslighted by her boss after the assault. Ms Hwang manipulates Ji-ho into a confrontation with the man who assaulted her and attempts to minimise the incident. Her co-workers accuse her of overreacting and frame their team as the most important thing to get her to dismiss the assault and continue working with her attacker. They excuse his behaviour due to drunkenness and a mistake and accuse Ji-ho of “whining”. She is placed in the impossible position of having to choose between losing her dream and working with someone who attempted to rape her, so she quits her job. 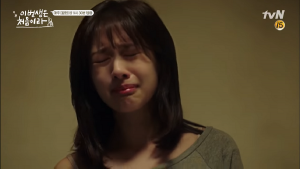 Ji-ho’s reaction to the assault and the events thereafter give a lot dimension to her character. She’s able to stand up for herself despite her fear. The choice to show her frightened but rebelling against the collective will of her co-workers and the emotional fallout of that fraught interaction showed how hard it is for women in similar situations. Ji-ho’s frustration at the systemic and social barriers to achieving her dreams is the struggle of many: she has displayed her ability and determination but factors beyond her control push her away from her goal.

Adversity plagues Ji-ho on every side and the scenes of tranquillity and domestic peace in the home she shares with Se-hee are a refuge from her many woes. The offer of marriage from Se-hee that is extended in episode two and accepted by the end of episode three makes sense despite the short length of time they’ve known one another. Se-hee’s pragmatic approach to life provides strong motivation for why he would propose. His father has promised to pay his debts if he gets married, Ji-ho is compatible with him, and a marriage would get his mother off his back. Ji-ho accepts because a home will give her the opportunity to pursue her dream despite her setbacks and not return to the patriarchal hold of her family home.

The romantic element of the rom-com format has been de-emphasised in the main relationship between Ji-ho and Se-hee repeatedly. Ji-ho kisses Se-hee in the first episode, but he places strong boundaries in place after they meet again. They verify against any romantic interest from the other party and clearly state that their intentions in getting married are purely for financial benefit. For drama watchers who are looking for overwhelming, runaway romance will be disappointed, but the moments of connection between Ji-ho and Se-hee over their shared love of Arsenal are heart-warming. 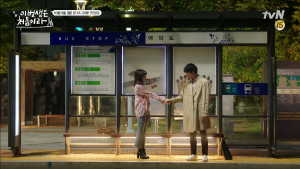 The way Because This Is My First Life is able to humorously and sensitively address how gendered expectations and patriarchy affects people’s lives makes for compelling viewing. Sexism and its effects are not excused when it’s given a larger-than-life expression, as in the case of Ji-ho’s father. Ji-ho and the women she is surrounded by are the heart of the story so far and watching them come to grips with the challenges that face them is an affirming experience.