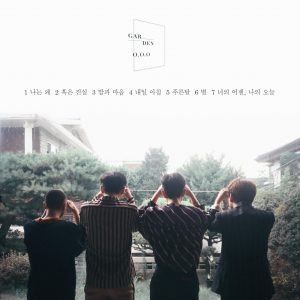 As the world slows itself to a silent hum and as we gravitate towards contemplative and maudlin thoughts, nothing is better than wallowing in a hypnotic blur of white noise with O.O.O in the background.

Made up of vocalist Ka Sung-hyun, guitarist Jang Yong-ho, bassist Lee Ji-sang and drummer Yoo Jin-sang, O.O.O (which stands for Out of Office) shys away from convoluted tunes and instead, plays with various conventional musical elements to build their distinctive soundscape. Despite only having two EPs with a minimal number of tracks under their belt, the band’s character and charm still staunchly shines through. Offering acoustics and heavier songs to rock out to, O.O.O’s songs sway you into losing yourself in a labyrinth of little mazes and condoling reveries.

They are unafraid to go beyond their comfort zone, treading into other musical territories brazenly. Their songs are not anything otherworldly or flashy – but oddly, this is precisely what sets them apart from the pack. The boys have joked about their contrasting personalities and how this actually brings out their best in one another to create the music they love. It’s amazing how their alleged weakness has become their strongest suit.

Their first EP Home was released in 2016. Blunt at the edges, the album has a collection of songs which allows for some late night pensiveness. The songs in Home touch on bleak uncertainties that we all can relate to, aiming to depict a story of a hard day that both starts and ends at home. “Gold Dust”, the last track, is one of their more stand-out songs in their entire discography. The light vocals and stacking of different guitar tones and riffs boast a dreamy and comforting ambiance, a quality difficult to match, thus setting the bar high for themselves.

I was instantly enamored with Bin (Empty), a track off their single Closet. There’s something about its tranquillity and cheery but mellow chords that create a feeling akin to being carried away by waves under an orange horizon. It’s the perfect song if you need to recuperate after a long day or if you just need a companion while slaving through work.

Their second EP Garden is more polished and refined at the very least, though it doesn’t stray far from what Home has to offer. Tracks like “Why Am I” and “Tomorrow Morning” effortlessly bring forth O.O.O’s strengths, which is their laidback, familiar and alluring soundscape that tugs at your heartstrings ultimately. Though their acoustics may sound similar, their ability to craft top-notch melodies shines through very evidently in their most recent album.

I have to admit, I tend to pigeonhole myself into listening to a lot of mellow acoustics that sound very similar, which is why I am horrible at telling songs and titles apart if I just listen blindly from a playlist. Therefore, “Blue Moon” is a good alternative when I’m feeling extra spunk and spiteful. Within the first few seconds, the track already showcases their exceptional guitar stacking and riffs and a strong-headed attitude. Another thing I adore about O.O.O is that they’re just the perfect band to listen to when you feel like being out of mind, out of sight––literally, regardless of whether you understand the lyrics or not.

Good indie music is something highly subjective since there are also more and more emerging indie artists in the scene, but I would say that O.O.O has safely secured a brightly-lit path ahead of them in the K-indiescape, should they continue to produce such stellar works.

Rather than restricting themselves to just one signature musical style, they are determined to stretch across and experiment with various genres and styles to find their own voice. It is truly their ability to unpretentiously stand out from the crowd even at their simplest that makes them a band to keep on your radar. I can’t wait to hear what they’ve got up their sleeves in their next album and see whether they will still tread on with such resolution and make a name for themselves.