Got7 Get it Right with "You Are" 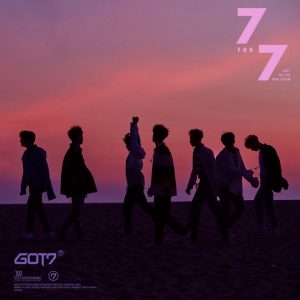 After a set of disappointing and confusing MV releases from JYP Entertainment‘s dynamic boy group, Got7 is back. They’ve made their return seven months after Flight Log: Arrival — the conclusion to their year-long flight themed trilogy. Headlining the new revival is the title track “You Are” off their seventh mini album 7 for 7.

“You Are” is co-composed and co-written by group leader JB under the pseudonym Defsoul. The track is an uplifting pop-EDM song accompanied by a sentimental music video that is quite a divergence from the hard-hitting but disjointed “Hard Carry” and the underwhelming trilogy closure “Never Ever.” The visuals for “You Are” are a fusion of stunning backdrops and scenic nature shots that help tie the song’s narrative in a cohesive and graceful manner. The MV also upturns Got7 from their music video slump and proves that they still have much to deliver as one of today’s top K-pop groups.

As a song, “You Are” ventures away from the group’s recent hip-hop and trap focused singles. Instead, the group relies on uplifting soothing tones that accompany the group’s harmonies in a soft yet refreshing manner. Lyrically, the song has much to offer, with sincere and touching lyrics that help influence the narrative of the video.

The sky is clear, there’s not a single tear

There is not a cloud, because of you

The world feels different to me 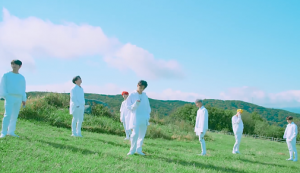 The song’s lyrics compare a girl’s love with the beauty of nature, hence the beautiful landscapes and natural backdrops we see throughout the video. These lyrics along with scenic visuals help to convey the narrative that everyday life for them has changed since their significant other has entered their lives — implying that she is what makes each day beautiful and much more livable. These types of lyrics aren’t anything new for Got7 since they have plenty of songs similar to this on just about every album; but, with such a defined and cohesive music video, the group was able to make the lyrics seem much more relatable and sincere.

What sets this comeback apart from the group’s past others is the synergy between the song’s lyrics and its visual representation. This has repeatedly been one of Got7’s biggest faults as a group — they tend to sing certain lyrics while showing something else entirely in their videos. Fortunately, this was not a problem with the “You Are” music video as it blended both parts perfectly to create a cohesive narrative between the lyrics and visuals. 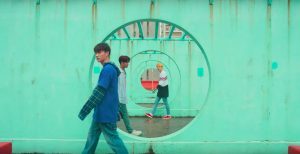 The music video opens up on Yugyeom staring upward into an elongated skylight that gives the viewers a slight taste of the geometric elegance that is to come from “You Are.” Shot in group member Jackson‘s hometown of Hong Kong, the versatility and liveliness of such a grand city provided a variety of sceneries and architectural locations that helped liven the video and its aesthetics.

As the first few notes of the music chime in, each member is placed into their own respective backdrop. BamBam performs in front of a triangular entryway while Jackson softly raps in front of a high rise structure formed by the connection of four side-by-side buildings. Different members also make an appearance in between circle structures that give off a pleasing optical illusion as the camera moves inward through each circle. These different locations around Hong Kong, and their architectural ambiguity, heighten the pleasing aesthetics for the video and help in creating a mysterious and dreamy vibe.

The aura of the visuals is also improved by the dance number throughout the music video, which is strong and passionately synchronized without it going overboard or taking anything away from the overall narrative. Through their powerful movements, Got7 is able to express their longing and desire for their significant other who has changed and given them a new perspective on their life. When the music builds and “You Are” soars into a sweeping melodic chorus, the members are seen on top of a skyscraper dancing in front of a sunset that captives the uplifting mood in that moment. At one point during the dance, each member moves their hands upward toward the sky, drawing parallels to the feelings one may get when looking up to a clear serene sky with the feelings of looking at a lover that brings both comfort and love. 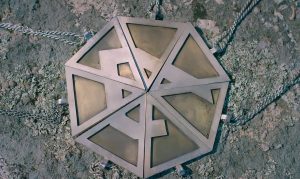 In brief moments throughout the music video, we are shown that each member has a piece of a heptagon necklace that only forms their complete band logo when the group comes together at the very end. This can be a symbol of Got7’s active bond as a band and their desire to continue on as one. With JYP’s upcoming survival show, fans have been worried about Got7 being placed on the back burner to make way for their company’s new soon to come boy group. But with past reassurances from Jackson and constant public interactions with the members that seem friendly and genuine, this video could be interpreted as a sign that Got7 share the passion and commitment to further grow more as a complete group.

Even though “You Are” isn’t anything groundbreaking, this music video is a major step up for Got7 who have received criticism for messy and incoherent MV releases in the past. I am more than relieved that they have concluded their Flight Log trilogy and are able to start anew with something fresh and exciting. Overall, there is much to enjoy from “You Are” and it certainly excites me for what Got7 has planned for the future.