Is NU'EST W's "Where You At" the Grand Comeback We were Waiting for? 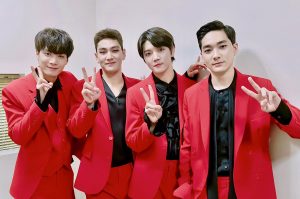 Produce 101’s success has catapulted NU’EST into the forays of stardom once again and Pledis Entertainment has managed to capitalize splendidly on it. NU’EST is currently promoting as a four-member group (sans Minhyun who is currently in Wanna One) under the name NU’EST W. They released their first EP –W, Here with the title track “Where You At” on October 10.

It is debatable whether “Where You At” is the appropriate song to come back with when this is virtually the group’s second chance at making a mark in the industry. Although the MV lives up to expectations, it doesn’t exceed them. If it were only up to the music, “Where You At” is a hit, but to guarantee the popularity of a release, the music video has to live up to visual expectations, which it seems to have failed to do.

“Where You At” is a mellow EDM track with imagery that’s hand in glove with the aesthetic it wants to build. Though the MV does not attempt to narrate a story, it does invoke a feeling of foreboding in tandem with the meaning of the song. The MV correlates substantially with the lyrics of the song. It is a song full of longing with one partner calling out to his estranged lover.

One of the plus points of the music video is through the use of symbolism. The title seems to be symbolized by a butterfly that the members follow, always within reach but not quite. The lyrics convey a restlessness and the video manages to capture it through cinematographic sequences of the members running through deserted lanes and looking up at the viewer in lonely sets such as an empty bedroom and an isolated mountain landscape. The rap verse and subsequent lines speak of being in a tunnel and being unable to get out of the confines of one’s mind:

Trapped in an endless and narrow tunnel,

I cant see anything

My heart is getting colored more and more

Even if I cant reach you with my hands so far 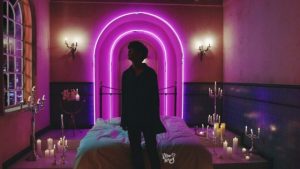 The MV matches perfectly with this constrictive feeling by having JR in a dark room all alone. Darkness, here, represents a kind of claustrophobia that the lover encounters on being unable to find his partner.

The MV’s imagery lacks a direction that would make the music stand out. Instead, it is strewn with images which seem out of place and unnecessary albeit adding to its own beauty. There are several church motifs such as a dark altar with a church organ, and several shots with candles that do not provide any fruitful addition to the production. The presence of a vintage car and pseudo-Victorian sets create an atmosphere of dark opulence. The inclusion of mirrors and glass create illusions and give off the feeling of being in a limbo, which is a plus. 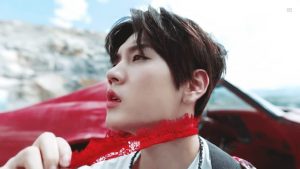 Certain quirks have been added to highlight the members themselves such as the heavy presence of the color red which has been used to put a spotlight on the members during the dance break through their attire. Furthermore, Ren is blindfolded using a red cloth and also drives a red car. The use of red seems to be redundant here since it symbolizes strong feelings like passion and aggression but the song or the MV do not promote these views at all. The imagery needs to be hard-hitting so that people are compelled to watch the video again and again. Even something as simple as G-Dragon’s “Untitled” would do because the idol is the star of the video. “Where You At” misses that mark since the shots are seemingly random and actually confusing at times.

The criticisms of the MV outweigh its positives. The forage of montages and lack of group shots compromise the cohesion of both the video and the song. The instrumental break was not enhanced by the ongoings on screen as would be expected. It failed to create the magnificent image it was aspiring for. The choreography, for the lack of a better term, was generic and the dearth of a clear shot of the dance sequence left much to be desired. The shortcomings of the MV have tipped the scales against the song’s favor, spoiling my expectations of a grand comeback and leaving me wanting for more.