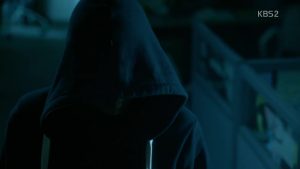 A cheerful, bumbling female lead with bad grades and lofty dreams of getting into the university where her first love oppa studies. A rebellious, motorbike-riding male lead who is the son of the school’s wealthy director. A golden boy with top grades and a troubled personality beneath his seemingly perfect exterior. And to top it off, a mysterious serial prankster named Suspect X, a constant pain in the school administration’s neck but upheld as a hero figure by the student population.

At first glance, School 2017 is cartoonish and chock full of high school drama cliches; it could not appear to deviate any further from the realistic take on contemporary school and social issues that distinguished most of the School series. At best, to the viewer going in with no expectations, this setup is wacky and campy, making for crack drama material with high entertainment value but perhaps not that much depth. At its worst, to the viewer acquainted with the School series, it smacks of wildly unrealistic and weak writing that falls back on convenient plot points and character archetypes. 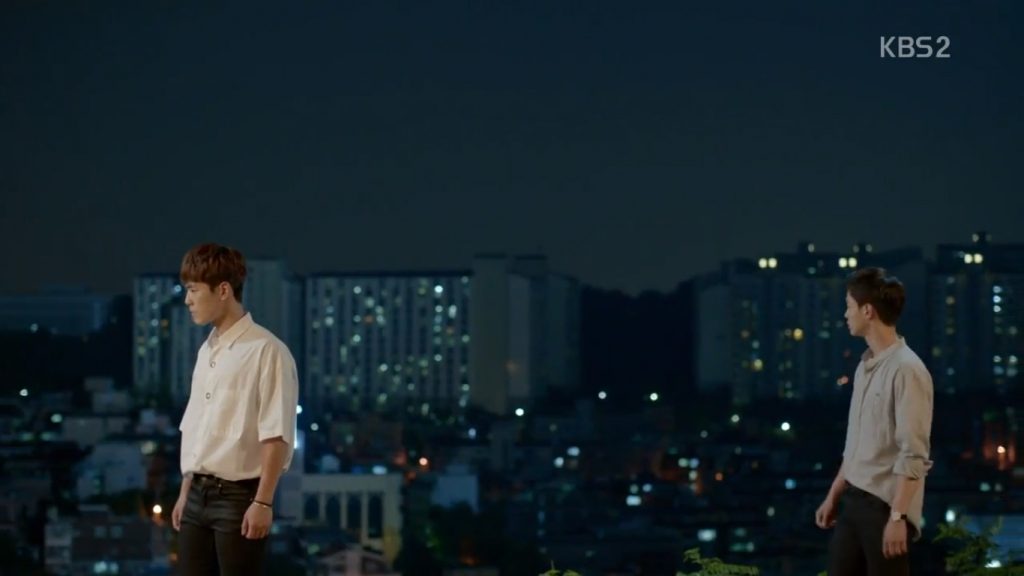 But past the polarising pilot week, as the familiar character types dissolve into fuller portrayals, it starts to become clear that beneath its comic tone and absurd setup, the drama is serious about the struggles and growth of its characters—even if these result from seemingly ridiculous circumstances—in a way that is true to the franchise. The broad strokes painting the story may be outlandish, but the finer details are penned with a slice-of-life focus that draws out themes of new and broken friendships, the undulations of parent-child relationships and young love, and navigating one’s dreams and place in society.

The premiere drew flak for how familiar issues of over-emphasis on grades are exaggerated through Geumdo High School’s questionable policies: a school cafeteria that ushers students in by order of their grade ranking, and an administration that posts up the students’ rankings to shame them into studying harder. Socio-economic inequality is also outlined coarsely through a contrast been the haves and have-nots. The female protagonist Ra Eun-ho (Gugudan‘s Sejeong) and second-lead top student, Song Dae-hwi (Jang Dong-yoon), hail from a working-class background, while male lead Hyun Tae-woon (Kim Jung-hyun) and some of their other classmates like Kim Hee-chan (Kim Hee-chan) are born with golden spoons in their mouths, and can afford expensive tuition and consultants to boost their academic performance and portfolios. 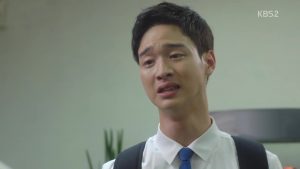 But to tear School 2017 apart or dismiss it solely on the basis of how it fails to be a relevant, accurate critique of contemporary social and school issues would be to miss the crux of the show. The story isn’t striving to be a realistic representation of socio-economic stratification or the ills of the contemporary Korean education system. The setup is cartoonish, and only loosely based on the actual socio-cultural context, but the way the young characters experience and struggle with their realities within the story world is emotionally true.

Geumdo High School is the central site of these struggles. It is a space in which uneven power structures and class differences play out, but it is also a space in which characters can and do transcend their social trappings to forge true connections with each other. This split is represented by the contrast between Eun-ho’s stern literature teacher Mr. Gu (Lee Jae-yong) and her timid form teacher Mr. Shim (Han Joo-wan).

A senior teacher disenchanted by his inability to rescue his students from the shackles of socio-economic inequality, Mr. Gu opts for a tough love approach on the kids in line with his belief that the school is but a microcosm of the cruel society it is part of; since he can’t change the system, he prepares them to face it. In contrast, the insistently kind and understanding Mr. Shim pushes back against social forces by trying to make the school a safe space in which even the most seemingly hopeless students have room to turn around and shed their social selves.

The rest of this review contains spoilers for this drama.

This effort to resist the defeatism of submitting to one’s social position doesn’t extend just from the teachers, but also the students themselves, and this occurs from both ends of the social spectrum. Tae-woon, resentful of his father’s corrupt tactics of using power and money to cover up for Tae-woon’s wrongdoings, assumes the identity of Suspect X to wreak havoc on the school.

But contrary to the perceived image Eun-ho has of Suspect X—”A person of justice, saving us from oppression”—Tae-woon is not motivated purely by noble intentions, at least not initially. If Suspect X’s doings seem juvenile, both within the narrative and as plot device, it is quite simply because it is Tae-woon’s childish form of lashing out at his overbearing father, and by extension the social forces that bind him and that he cannot change, even as he benefits from them. 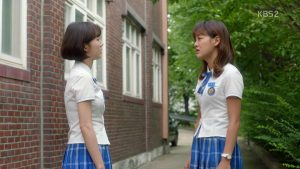 The writing is careful not to just glorify Suspect X as a selfless hero-figure: Tae-woon is often so absorbed in his pranks that he fails to consider what could happen if they entangled someone else. This happens more than once: first, Eun-ho becomes the prime suspect for the pranks after getting caught breaking into the teachers’ office to recover her confiscated sketchbook, and later, Principal Yang (Kim Eung-soo) blackmails Eun-ho’s best friend, Oh Sa-rang (Park Se-wan), threatening to fire her mother who works as the school custodian if she fails to expose Suspect X’s identity. There is a strong socio-economic dynamic at work here: because Eun-ho and Sa-rang lack the political and financial backing of the wealthier students at school, they are powerless against the corrupt manipulations of the administrators.

But Tae-woon’s Suspect X pranks gradually become a vehicle to expose the ills of the school, disrupting the administration’s efforts to hush up their shady doings: for instance, catering expired food to the students, creating competitions with pre-determined winners to beef up the portfolios of the rich students, or letting wealthy parents replace student evaluations—which are supposed to be written by teachers—with more advantageous ones commissioned from private consultants. 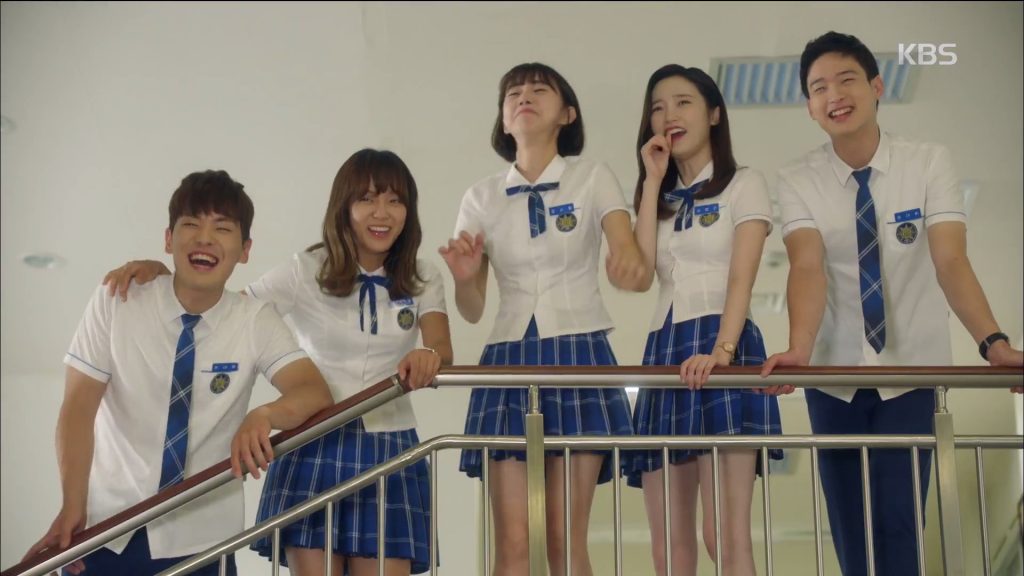 What’s interesting about these acts is that though at times they succeed as deterrents, they don’t really achieve true social change, remaining for the most part as subversive pranks that temporarily shake up the status quo. The real value of the Suspect X plot device lies instead in how it catalyses the interactions and tensions between five characters—Tae-woon, Eun-ho, Dae-hwi, Bo-ra, and Sa-rang—and ultimately bring them together.

More than being about individuals correcting social injustices and changing the system, School 2017 is about empathy—reaching out to one another, so that they don’t suffer these injustices alone. The characters don’t need a hero to remove their struggles for them. All it really takes is a pat on the shoulder and an arm to lean on, someone to see them for who they can be and not just who they are, or someone to throw the first punch for them, to help them get back on their feet and fight their own battles. None of the characters can make a dent in the status quo on their own, but the moral support they provide each other with is enough to make a palpable difference to their lives. 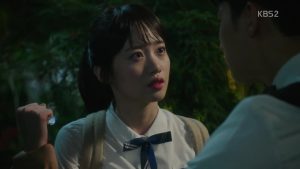 This is why, though Tae-woon may be the scene stealer of School 2017, swoony and hilarious in turn, it is Eun-ho who forms the moral centre of the drama. She embodies the strength of empathy: Tae-woon—who becomes a loner after an accident that kills one of his best friends Im Joon-gi (Kim Jin-woo) and estranges him from the other, Dae-hwi—finds in Eun-ho unexpected insight beyond his rebellious exterior, and a listening ear regarding this traumatic incident. In one of the strongest subplots of the drama, Eun-ho also reaches out to their classmate Seo Bo-ra (Han Bo-bae), who is scarred and deeply mistrustful of others because of a history of dating abuse, bullying, and a betrayal by her first-year form teacher who promised to help her.

And yet Eun-ho is as flawed and uncertain as most of the other characters. She is unsure of whether she has the artistic talent to achieve her dream of being a webtoon illustrator, she neglects Sa-rang in her excitement over her new friendship with Tae-woon, and she hides her feelings for Tae-woon out of fear for the vulnerability of committing to a relationship for the first time. Her growth and the changes in her relationship with Tae-woon play out through spaces that make a recurring appearance over the course of the drama.

Tae-woon’s escape is a disused rooftop car park that overlooks the city, where he once hung out with Joon-gi and Dae-hwi but now retreats to alone. The day that he first brings Eun-ho to the rooftop, turning it from a private space into a shared one, marks the beginning of his opening up and recovering from his past emotional wounds. What used to be a place of sad memories and reminders of his guilt and helplessness becomes a place of healing and connection.

Eun-ho has a similar space—the neighbourhood playground located on a hill is her solitary place for reflection, where she mulls over her worries. The elevated placement of both settings above most of the city parallels how they are spaces where Eun-ho and Tae-woon can confront their troubles, and yet also temporarily retreat from them to see life from a larger perspective. Eun-ho’s personal space also becomes a shared one when she brings Tae-woon into it. While the space plays a role in the development of their relationship, the shift in its emotional meaning is also a marker of how they are growing closer and changing individually. 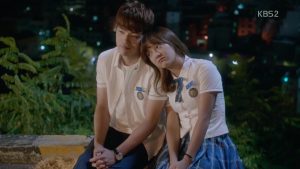 Amongst one of the show’s greatest strengths is this relationship between Eun-ho and Tae-woon, built on a solid foundation of mutual support and empathy. Their concern for each other is expressed in an everyday way—words of encouragement, a bottle of lemonade, some wise advice—and these gestures are profoundly romantic without needing to be grand or romanticised. Even when the plot veers dangerously towards the cliche of noble idiocy in the finale week, what underpins their decision to risk expulsion for one another is framed in very ordinary and understandable terms: Eun-ho doesn’t want Tae-woon to lose the friends he has made, while Tae-woon doesn’t want Eun-ho to be the scapegoat of his pranks and lose the normalcy of high school life that she loves.

School 2017 isn’t without its imperfections: the editing can be bumpy, especially in episodes in which the vignettes are not bound by an overarching theme, and the secondary plots vary in quality, not always developed to their full potential. But beneath the awkwardness of its technical hiccups is a story made with a lot of care and love. In the end, the drama isn’t about what family you come from, what your grades are, or even what your dreams are—it’s about the kind of person you strive to become, and the ties that you break, mend, and make. Bolstered by strong performances from its rookie cast, an outstanding OST, and impeccable sound editing, School 2017 is a healing drama that makes for one of the most emotionally satisfying watches of the year. 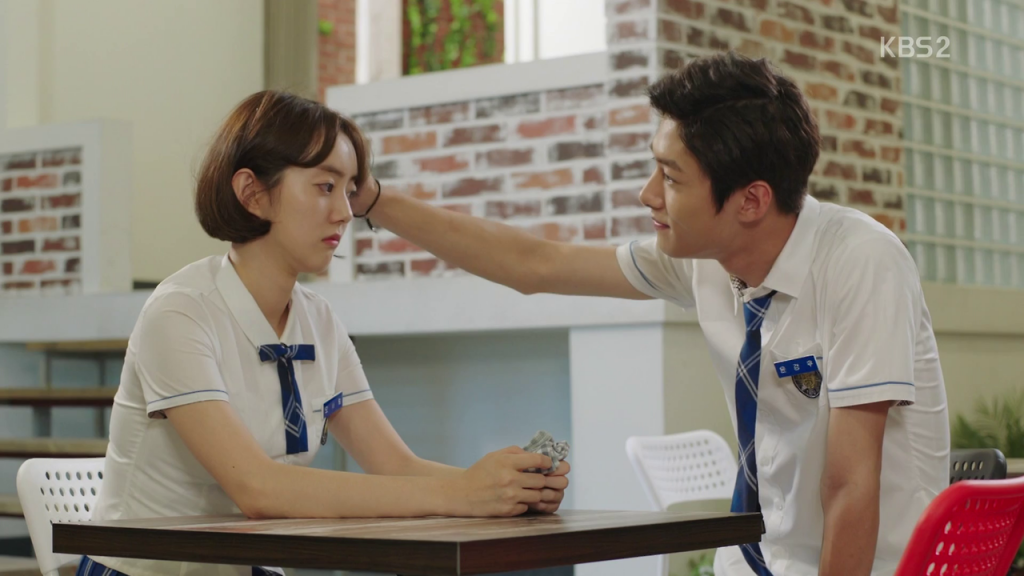