Day6 Struggle To Let Go With "I Loved You"

Some love stories don’t end with resolutions; they’re just over. You’re left to pick up the pieces of your heart and find a way to keep going when you don’t feel ready. The frustration when your emotions are still reeling, but you’re intellectually aware that you should be moving on, can be overwhelming. Self-flagellation out of impatience with the process of grieving your lost love is both normal and awful.  Day6’s “I Loved You” explores this angst and the stress of getting over failure in love.

The premise of the MV is a continuation of the storyline set up in “What Can I Do”, which explores the falling in love stage with a bad influence. “I Loved You” shows the resolution to some of the narrative arcs set up in the “What Can I Do” video and builds a few hopeful future possibilities. It’s the ninth single released in the Every Day6 project and showcases the band’s developing focus and confidence.

Each character introduced in the “What Can I Do” video is emotionally developed in “I Loved You” according to their relationships with others. Jae’s character is still the simplest and probably the most optimistic with him visiting a crush who works at a coffee shop. Dowoon and Young K’s characters move from social isolation to the beginning of a tentative friendship.  Sungjin and Wonpil are separated when Wonpil is left behind on a bus while Sungjin follows his crush, presumably to confess his love.

The characters’ storylines interact coincidentally but in ways that are significant. Young K’s charismatic bad boy character teases Sungjin’s crush in the classroom, playfully brushing off her attempts at making a connection with him. His rejection inadvertently makes room for Sungjin at the end of the MV to be considered in the eyes of his crush. After seeing her attempts at flirting with Young K be dismissed, the stakes of Sungjin’s impulsive decision to confess are raised.

Young K’s decision to protect Dowoon’s enigmatic loner character has a symbolic meaning relating to the song as well. The physical pain he endured by getting beat up is somewhat helped by Dowoon’s consideration and a platonic connection is made. Though the MV shows a lot of pain; it juxtaposes it with sweetness and the prospect of love. It’s a story of new beginnings acknowledging that with new relationships, conflict and effort are required and often people are hurt in the process.

The only character whose emotional journey doesn’t evolve is Wonpil, who sends ambiguously yearning looks at Sungjin just like in the “What Can I Do” MV. Wonpil’s longing for Sungjin’s attention has no possibility for change because unlike the other characters he doesn’t expose himself to risk. His feelings for Sungjin are unspoken and it’s unclear whether they’re from a platonic or a romantic origin. His character’s inability to act on his desires results in just as much heartache as those that put themselves out there but he has no possibility for success.

Heartache is not an unfamiliar subject to the band. They’ve explored reminiscence in love and circumstances getting in the way of love. “I Loved You” is about the pain of letting go. Lyrically it is pretty bleak, alternating between the sadness of losing a partner and the anger of not being able to forget the feelings they inspired. The story of the song doesn’t come to a hopeful conclusion it simply expresses the difficulties experienced by the protagonist.

Really, I loved you
That’s how much harder it is
I want to hate you
But I can’t so I hate you even more 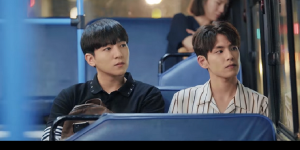 The instrumentation of “I Loved You” compliments and adds complexity to the lyrics. While using some minor chords, the progression invokes a soaring, triumphant feeling. It’s accessible and has a group sing-along quality contrary to the personal isolation of the lyrics. The vocals are delivered with a bittersweet performance style aided by the clear background harmonies and the lone whistle in the first half of the song. The effect created is one of a familiarity that doesn’t fall into total misery. The message and arrangement of the song suit the emotional storyline of the characters in the MV who take risks in love that sometimes pay off and sometimes fail. The song describes a moment of struggle to enact personal change while the characters are seen taking those leaps of faith and seeing how they could be hurt in the process.

The song describes a moment of struggle to enact personal change while the characters are seen taking those leaps of faith and seeing how they could be hurt in the process. The MV is an interesting, visual complement to the song exploring different iterations of love from friendship to romantic connections. The cinematic components depicting relationship scenarios in recognisable ways elevate the song somewhat. They’re not reinventing the wheel with the song or the video but it’s well executed and enjoyable. The elements form a balanced partnership to make “I Loved You” a solid and enjoyable addition to the catalogue of releases by Day6 this year.