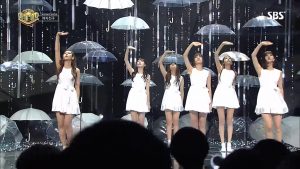 Fall is here and so is Best of Weekly Music Shows! We got highly anticipated comebacks from BTS, Sechskies, April, and GFriend, combining the worlds of the first generation of K-pop with the newer ones. Sadly, those performances didn’t include MBC Show Champion or Show! Music Core since the network is going through a media strike. Hopefully, things will be resolved well for those seeking more freedom of speech in the press.

EXO took home another win for “Power” on KBS Music Bank while GFriend experienced their first wins for “Summer Rain” on SBS The Show and Mnet M! Countdown. Results for SBS Inkigayo weren’t available at the time of the writing of this article. Congrats to everyone!

This week yielded a lot of exciting stages, but I had to narrow down the choices to a select few. This isn’t to say other performances weren’t great; I just really enjoyed these particular sets the most. If you’d like to add your own favorites, we welcome that in the comments below.

Nobody attack these adorable angels! I have such a soft spot for this group because it’s clear that they love what they’re doing. Who cares if their moves look cheesy? They’re at the ideal age for cringey cuteness. I don’t know what they plan on doing once puberty hits those sweet little voices, but for now, I’m going to appreciate their youthful innocence.

The title describes exactly what I did while watching this. I wish newer fans would take time to get into some of the first generation groups, especially when they’re still coming out strong like this. People may not view ballads as “powerful”, but the strength of a performance doesn’t always involve hard-hitting choreo or hyping up the crowd. Sometimes it’s about staying still in that chill vibe and allowing the mood to wash over you. Relax and get into this.

I love their styling for this. You can argue that it’s not integral for a performance, but I think it helps enhance the overall feel of the music. Pentagon brings this very casual boyfriend style to their stage that is both simple and somewhat sexy. The opening of them appearing as silhouettes coming out from fog was a very nice approach that set the right mood for their stage.

I like this choreography. It’s not filled with a plethora of stunts or fast moves, but it fits the song. The beginning is my favorite part for the piano accompanied by their ballet-style turns. The set design is gorgeous! Their white outfits stood out well among the clear umbrellas and beaded rain. I wish the cameraman would’ve cooled it on the quick zooms, but that didn’t stop me from loving this performance.

Now this is going to seem like cheating since this stage wasn’t a part of this week’s M! Countdown lineup. However, I think it technically counts because the only difference is BTS has reached a level that allows them their own separate show on a major network for their comeback. They did this song on SBS Inkigayo, but I really loved this performance the best. The camera work was on point, panning to the members at all the right times for their parts. Suga‘s minty hair in the red bandanna is everything. I also love Jungkook‘s “Did you see my bag?” jump roping moves that I plan to incorporate into every single obnoxious victory dance I do anytime I succeed at life.

What were your favorite stages from the past week?