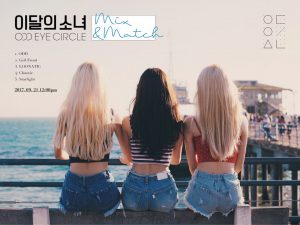 Loona’s (stylized LOOΠΔ) debut arrangement — debuting one member per month at a time — is unconventional and slightly confusing, but it is perhaps the first of its kind and sets the girl group apart right from the get-go. The only thing is, with the huge amount of time between each member debut — and yes, one month is a pretty long time in the K-pop world — it’s very difficult for general listeners like me to really know what’s going on with the group and who the members are.

But enough with their debut concept, and onto the real reason for this article: having revealed two-thirds of the group, LOONA has formed two units so far — Loona 1/3 and more recently, Loona Odd Eye Circle, who just released their EP Mix and Match. The newer trio, which consists of a quarter of the whole group, includes JinSoul, Kim Lip, and Choerry.

Mix and Match is quite distinct in its genre, fusing electronic notes and beats with bubblegum pop to create a style that’s very quirky — think Red Velvet and Ladies’ Code (their recent releases, that is). It has the bright fun of the former group and the laid-back chill vibes of the latter. That being said, the mini-album does cover a lot of ground and while the tracks are quite easy to listen to, they are also very diverse in the tone, mood, and atmosphere.

“Odd”, a short intro, tries to set the scene for the rest of Mix and Match, and it does an okay job of doing so. Its heavy synth accompaniment coupled with the altered tinny vocals hints at the heavy use of synthetic sounds in the latter tracks. 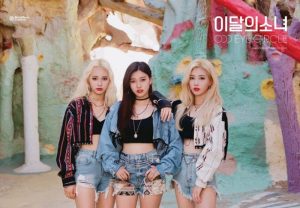 The title track, “Girl Front”, is perhaps the most public-friendly and stage-friendly track of them all. With its cheerful, uptempo beat, it’s easy to imagine the performance for this song, and in case you want to know whether they live up to your expectations, they performed this on KBS Music Bank just this week (a little strange, considering one of the group’s subunits is debuting before the actual group). Quirky elements like the low-pitched autotune motif are added to spice it up, but even with their addition, there’s nothing that genuinely pops and stands out, making “Girl Front”, unfortunately, not too memorable.

“LOONATIC” keeps the bright and playful vibe of its title track, but it encapsulates characteristics of the soft rock genre to create a more dreamy mood. This is furthered by the high-pitched, delicate vocals of the members in combination with the slight reverb effect. Honestly, even though this track isn’t as public-friendly, it could have made a unique, standout title track.

The final two tracks, “Chaotic” and “Starlight” are more up my alley, with them being slower, darker songs with R&B influences. “Chaotic” starts with a strong beat with minimal bursts of instrumentals to spotlight the vocals. It builds to a sultry(!) chorus heightened by the swell of synth notes. “Starlight” is slightly gentler, with smooth vocal lines punctuated by alluring rap sections. Although these two songs are notably different from the first few, they do continue the electronic vibes.

Overall, the album is quite cohesive in its style — I know that I’ve been saying that a lot, but it’s really what sets the Mix and Match aside from all the other recent girl groups releases. Instead of going down the cutesy road or taking on a fierce, girl-crush route, Loona Odd Eye Circle has a cool and bold concept that works. It’ll be interesting to see whether the whole group will follow in this subunit’s footsteps, or whether they will embark on something completely different altogether.

Either way, Loona is definitely a group to keep a look out for!