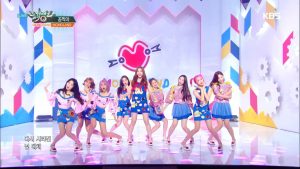 Welcome back to another installment of Best of Weekly Music Shows! Not sure about anyone else, but the summer heat is unbearable where I live. When you’re sweating like a Yeti in the Serengeti, you yearn for a distraction to deal with the ruthless temperatures. K-pop isn’t a relieving air conditioner, but it is a welcomed source of entertainment when nature hates humanity. Summer stages deliver on vibrancy and excitement with lively choreo and upbeat songs. It’s also a great time for comebacks and debuts. Sunmi made a dramatic return along with Boyfriend, Pristin, and Victon. We saw debuts from S2 and GreatGuys as well.

Wanna One continues to reign the music shows, winning for their song “Energetic”. It’s been less than a month since their debut, and their popularity has earned them almost two weeks of trophies. If this momentum remains through next week, they might achieve triple crown status. Great job, fellas!

I found myself in a small conundrum when compiling this list, but that’s always an issue. These are some of my favorites from the past week, so they have no bearing on the popularity of anyone. I encourage our readers to share which stages they liked in the comments.

There are a number of pros and cons to being a solo artist. A con I’ve found with many — especially ballad singers — is an inherent rigidity in their performance. Obviously, ballads don’t lend themselves to a booty-poppin’ dance with backup dancers, but there’s no reason the singer should stare at the camera like the endless void of death. That’s why I enjoyed HooNia’s performance. It wasn’t anything spectacular, but compared to other soloists, I appreciated him listing from side to side while focusing on the song. He looked engaged and alert, so it wasn’t weird to watch him. His voice isn’t too bad, either.

I’ve seen this group on shows, and their style came off too cutesy for my aegyo-loving ass in the past. Shocker, I know! However, I’m pleased with this comeback. The outfits are a bit much, but I like the playful circus vibe. The choreography had the members in adorable poses, even when they weren’t actively dancing. I enjoyed this visual as it complemented the bubbly brightness of the group. The camera work helped capture a little of that charm on screen.

Before anyone throws shade and side eye, hear me out on this group. They’ve got potential, and you can see it in their dancing. I know the song is a polarizing mess, but let’s recognize the choreo for being the best part of their debut. Some of those moves hit hard and mimic styles normally reserved for boy groups. I felt like this was a blend of Red Velvet and BTS with a hint of 4Minute, groups with stages that I’ve usually liked. I feel something really good could come from this group down the road. I simply want them to keep dancing like this.

I’m pleasantly surprised with the increasing number of bands making appearances on the music show circuit. I couldn’t quite get into the MV for this song, but this stage made me reconsider my initial response to this group. Hearing the warm tonality of the lead singer’s raspy voice at the beginning was all I needed to feel good on a bad day. It almost feels like you have a really sweet boyfriend who showed up with his friends to serenade the sadness out of you. I could fall in love with The Rose.

Excuse me while I kick over a chair for the one and only SUNMI! No, no, everyone be quiet! I stan this woman, you hear me? This performance was everything. I love the dark floral aesthetic. I love Sunmi. I love that we have male and female dancers switching in and out of the routine. I love Sunmi. I love seeing her intricate handography, and, and, and — HER! I LOVE HER! Sorry, words aren’t my friends when one of my queens has returned. I’m beyond thrilled by her comeback and needed this in my life.