Pristin Give Whiplash In "Schxxl Out" 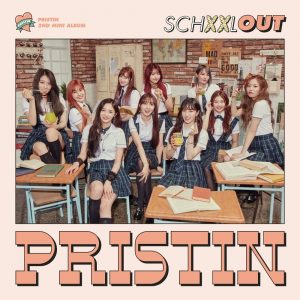 Pristin is one of the more notable rookie girl groups of 2017. While their actual debut was a bit lackluster, they had enough other factors, such as two former I.O.I. members, and several writing and composition credits to keep interest and hope high. Now returning with their sophomore EP, Schxxl Out, Pristin has another chance to impress audiences. And if there’s one thing Schxxl Out does, it’s make an impression.

It’s immediately clear that Schxxl Out was not conceived as one EP. It is two distinct halves put together in flagrant disregard of anything resembling cohesion. To be fair, a certain lack of musical cohesion is par for the course in K-pop, but Schxxl Out is in a league of its own. The genre shift is so sudden and so total that it left me bewildered every time I listened.

The first half consists of intro track “We Are Pristin” and title track “We Like”. Both follow heavily in the musical footprints of “Wee Woo”. This does have the benefit of helping to give Pristin a distinct image in a musical landscape filled to bursting with large rookie girl groups sporting a cute concept. However, the elements they picked up on and expanded were not the best choices. The most defining elements of “We Are Pristin” and “We Like” are easily the cheerleader chant choruses and the percussion-heavy production, which is disappointing.

Pristin has solid vocals, and the all-too-rare willingness to delve into their lower ranges. The runs on “so fine/ be mine” in “We Like” are catchy as hell, so seeing them minimized in favor unison chanting is just depressing. The production is unique, focusing on the beat and pulling in pops, whistles and stomps to fill it out, but the mix is off. The vocals are buried, and the percussion plus the choruses means that “We Are Pristin” and “We Like” come off as loud more than anything else. On the whole, though, they’re catchy, fun, and help build Pristin as a brand.

All this makes the sudden shift that occurs at “Aloha” all the more jarring. “Aloha”, “Tina” and “You’re My Boy” are the polar opposites of the first half of Schxxl Out.  Where the former is vibrant, wild, and youthful, the latter half is soft and feminine, without being childish. The production shifts to an almost jazz-influenced sound, filled with pianos and brass, and the vocals are put front and center. And Pristin handles this sound very well.

They excel with the slicker, more restrained sound. This is where they get to show off their vocal prowess, now that there’s room in the track for their voices. Their emotive range gets to shine as well, such as the coyness of “Tina”. The trade-off is that, despite the flourishes sprinkled throughout, such as the killer sax line on “You’re My Boy” and the staccato trumpets of “Tina”, the second half isn’t as unique. Any girl group could have sung “Aloha”, but only Pristin could have delivered “We Like”.

As two halves, Schxxl Out shows promise for Pristin, furthering their image and expanding their musical range. However, it’s not two halves; it’s one EP. The first two and latter three songs do not go together in any way. The genre shift is something you have to brace for or be massively caught off-guard every time. There are a few token attempts to bring the latter half closer to the first, but the synth squacks in “Aloha” and what is I swear to God the Harlem Shake on “You’re My Boy” make the songs sound disjointed rather than the EP sound cohesive. Most albums have a large number of producers, composers, and lyricists, but still sound like one piece of work, not two pieces hot-glued together.

If Schxxl Out had gone in either direction, it would have been a solid sophomore effort for Pristin. By trying to split the difference, it succeeded at neither and failed at both.