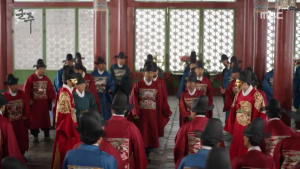 This week’s episodes of Ruler: Master of the Mask were filled with everything the drama has promised from the beginning. There’s action, betrayal, drama, and even a little comedy. The tension is steadily increasing and the dramatic conclusion is on the horizon, but we still managed to be surprised by the actions of the characters we have been following for 9 weeks. We see interactions happen this week and they’re all in the name of love and power, which is the overarching theme of the drama.

Hwa Goon didn’t care about the Pyeonsoo-hwe or the influence she would have as its leader. Her father’s affection could only do so much for her. She wanted to be loved by the Crown Prince, and when he could not return that feeling for her, she endeavored to make herself a useful ally. She was a strong character, willing to take big risks on a man who she could never have. Driven by love she was prepared to face the ultimate punishment, showing not only the depths of her affection for the Crown Prince but also the magnitude of her grandfather’s greed. Dae Mok killed his own granddaughter because she threatened his power. Hwa Goon destroyed the foundation of her grandfather’s organization because he threatened her love. 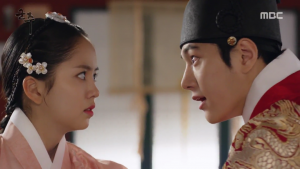 In direct contrast we have Lee Seon who definitely has fallen victim to the seductive feeling of being the king. Once a lowly water carrier, he now has ultimate power has become addicted to it. What was once a quest for retribution has been twisted into a crazy bid for ultimate power. It’s not enough for Lee Seon to play king and placeholder while waiting for wrongs to be righted. He has gotten it in his head that he must be the one to do things and that he deserves to have everything he wants. The timid yet angry boy is transforming into an angry, vengeful tyrant who will stop at nothing to hold on to the tendrils of power he was managed to grasp.

There were two things Lee Seon longed for when he first became the puppet king: his family and Ga Eun. Yet, in his quest to show how much he deserves the power he was, he’s managed to push both entities away. His sister, Kko Mool, is afraid to be around him alone. His mother worries for him, yet he dismisses her and yells at her when she shows her concern. Even his “love” isn’t safe. Whenever she spurns his advances he shows his temper. His love has become obsession and even after she confesses to loving someone else he continues with his plans. He tells her he doesn’t care because he will make her his queen anyway. He wants to own her, just like he wants to own the position of king. It’s no longer about love, or what is right. He doesn’t even have avenging his father or the promise he made with the Crown Prince on his mind anymore. He wants to replace the Crown Prince and make himself king so that he can feed the insecurities inside him. He has become a power hungry monster, very reminiscent of Dae Mok.

Speaking of Dae Mok, we could say that the love of power is what has gotten him to this place. Not only has he lost the flower fields, he’s lost the only member of his family that he truly cared about, his son has abandoned him, and the Pyeonsoo-hwe is about to lose a majority of it’s members. Using so many pills to poison the Queen and her people has backfired on him and now he has to do damage control. Always a man of action, Dae Mok has used all these events to his advantage. 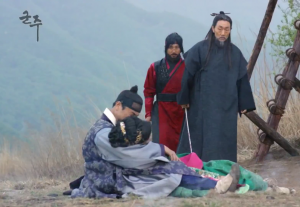 First, Dae Mok must make the antidote to the poison but as only 50 people can currently be saved, there will be weeding among the group. To this end, Dae Mok created a hit list of people to get rid of. This could potentially be used against him, showing him as a more violent leader than others lower in the organization may know. We already know that Dae Mok will not meet a pleasant end, however he manages to be defeated, but this death list, the pressure of making antidotes in such a short time, and not properly grieving his granddaughter are sure to catch up to him.

But Dae Mok is not willing to let anything stop him. He continues to manipulate Lee Seon into humiliating the Queen further. He builds the boy’s trust by allowing him to choose Ga Eun as his wife, and even lets Lee Seon set the final trap for the Crown Prince. His informants keep him up to date on everything going on in the palace but he still ended up, like Lee Seon, woefully unprepared for the Crown Prince’s return. His quest for power has left him blind to the little details of things going on around him.

We have four episodes of Ruler: Master of the Mask left. The Crown Prince has finally made his big bid for the throne, throwing both factions — him vs the Pyeonsoo-hwe — against each other publically. The truth is soon to come out, and we will learn if the Crown Prince’s love for his people will triumph over Dae Mok and Lee Seon’s love of power.