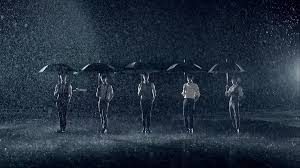 It’s been about two months since KNK returned with their single album Gravity, so it’s clearly time for a re-issue. Called Gravity, Completed, the re-release is headed by the new single “Rain”, which, like its’ predecessor “Sun, Moon, Stars”, is a tender ballad about unrequited love. And yet, it’s a little more than that.

I’ve always taken a bit of umbrage with re-releases. Either the songs included weren’t good enough for the first time around, or they were written afterwards and don’t mesh with the original. “Rain” is the rare song that averts that and legitimately connects back to “Sun, Moon, Stars”.

Before, KNK was freshly dumped and wondering if they would ever be able to get over get over their ex because they still genuinely love here. Here, they’ve had some time to lick their wounds, and have reached the point where their views on the relationship have soured and they’re ready to be over her, but they aren’t. Even the metaphor is a logical progression; the ex-girlfriend having gone an untouchable celestial object to a banal annoyance that everyone puts up with but cannot wait to be over. 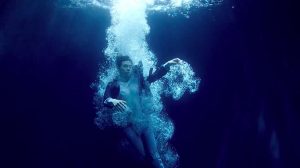 The biggest issue I have with most ballads is that after a point, they all sound the same. Take tender emotional vocals, soaring high notes, piano and drums for the instrumentation, some synths or guitar if you’re feeling adventurous, mix and serve with a side of kleenex. And all of those boxes are ticked here. There isn’t a lot of risk, but“Rain” has some good flourishes.  The guitar line isn’t standard acoustic guitar but Spanish guitar, giving some extra pizzazz. The addition of an alto sax does much of the same, in that the loop doesn’t alter the structure of a traditional ballad, but gives “Rain” some personality and punch to add to it.

The MV is short on plot, in that there is none, but long on emotion. It is absurdly beautiful video that matches and heightens the heartbreak of the lyrics. While the solo shots are simply the members grieving their lost relationships, the low lighting, wide shots emphasizing how alone KNK are, and the genuinely good acting elevate the loss and pain of the song so much that it feels less like their girlfriend left and more like she died. There’s too much emotion for anything else, especially with the shots of KNK plummeting into large bodies of water. While rather sudden, these shots all occur around the climax of the song, and after each member has found or seen something that tips their feelings over the edge. It’s as if they have reached peak grief and are now literally drowning in their own pain.

The other big thing that truly pops in ”Rain” is the styling. As a rule of thumb, I try not to focus on that, but I make exceptions when styling is exceptional or horrific. KNK looks exceptional. There’s a saying that suits are to women what lingerie is to men, and that point is well-proved here. The waistcoats, suspenders and rolled-up sleeves are just casual enough to make KNK look vulnerable and just formal enough to make the audience start drooling heavily. Somehow, even the checked fabric looks sexy. Really, the only way KNK could look more attractive is if they were in suits, soaking wet. Which happens about three minutes in, and provides tangible evidence in God.

KNK is quickly proving themselves as a group to watch out for, and with releases like “Rain”, that can only be a positive.