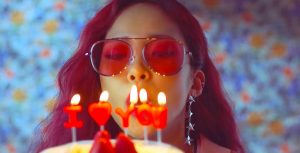 The first time I heard of Heize, it was for her song “Round and Round” on Goblin‘s soundtrack. I was drawn in by her unique, slightly haunting voice. In the past, others have found her music to be dynamic with lyrics that are riddled with complexity and emotive undercurrents that are greatly aided by her vocal colour.

Something about Heize reminds me vaguely of Ellie Goulding, Lim Kim and Lee Hi — they all have interesting tones in their voice that allow them to make music that sounds very different than the norm. With the desire to challenge myself to listen to music outside of my comfort zone, I reached out to give /// a listen. 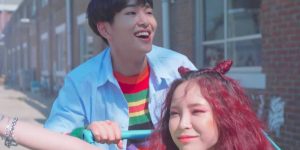 /// is well put together, both musically and lyrically. The unorthodox title, where each slash represents “You”, “Clouds” and “Rain”, respectively, sets the stage for the story. By using weather and sky based elements for imagery and tonal shift, Heize weaves a tale of love, loss, and moving forward as part of reconciliation with the shared history between two people in a relationship.

Her first track, “Don’t Know You” speaks of her taking her significant other for granted and not knowing who he really was. It was during this song when she slid seamlessly from singing to rapping that I realized that Heize is also a rapper (cue me searching her up and yes, there she was on Unpretty Rapstar). She raps with no inhibition about her climb to fortune and desire to become more respected and give back to others. Whilst her chorus could use more pronunciation, the song is well crafted and very much to its credit, it achieved a certified all-kill on June 28th.

Moving onto the “clouds” part of the EP album, “Dark Clouds” featuring nafla features a whimsical instrumentation that is at odds with the lyrical content of the song. Both rappers speak on the complicated matters of heart that arise after moving on from a breakup. The theme of clouds start on a light note as Heize speaks from being heartbroken to living well in the present. At the end, the cloud metaphor comes to fruition as it turns out that she is simply covering her pain with smiles.

I’m getting darker all around me.
It turned out to be a dark cloud.
Cloudy over head
I’m trying to cover my smile. 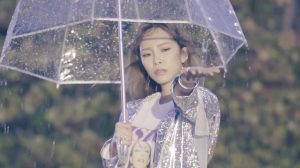 The dark clouds give way to rain, the final / of her EP album. “rainin’ with you” serves as a piano heavy transition piece. Two minutes of this and her titular song “You, Clouds, Rain”, featuring Shin Yong-jae, starts immediately at its heels in such a smooth manner that it led me to believe it was the same track. The shift in mood is tangible as the song itself has raindrops as gentle ambient noise as Heize’s verse attributes the fallacy that the rain is caused by her thoughts of her significant other.  Yong-jae’s verse matches Heize’s in terms of tone and clarity — their breathy vocals are pitch perfect in consideration to the song’s tone and mood. For both of them in the song, they share the rain as the conduit for their lingering feelings about the other. The joined verse at the end is a beautiful wrap up to the song, both thematically and lyrically.

When this rain stops, we have to go our own ways
And live our own lives again 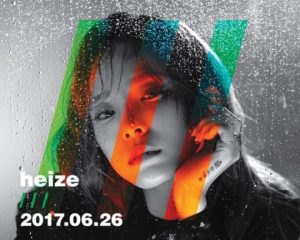 The final track, “Star”, introduces a different element from the one above. The song itself encapsulates all other previous elements of clouds and rain as an ode to the person that has been the subject of the EP. It should be noted that this is the “rain” version of the song – for the purposes of thematic continuity in the album, “Star” takes on a quieter sound that is bare of too many extra musical effects.

“Star” pelts down questions relentlessly to lament on the desires she still feels, even if they have moved on from each other. The mysterious nature of a star in the night can be seen as a analogy for the physical and emotional distance she is experiencing.  This song lacks the low notes that was present from Heize in the previous song but with good reason. “Star” echoes a pensive nature that is tinted by curiosity which benefits from her higher notes and the song ends on a soft croon rather than a belt that was occasionally present in the background.

/// ‘s execution was subtle — from the way the songs tied itself into the album title to using shifts in beats to signify a tonal shift. One of the few weaknesses the EP had was with Heize’s enunciation — there are certain verses in the songs that would benefit from a crisper delivery, which in turn would deliver her story with more clarity. For what it lacks, the album more than makes up for in spades. Her rap verses, no matter the speed, are tinged with a melancholy that makes it a perfect elemental fit.  The use of a pure instrumental as a transition piece did not feel forced and was very much in tune with the overall feel of the album. Heize doesn’t show off her entire vocal range and for such a cool thematic album, she doesn’t need to. It’s the subtle pockets of her voice that makes this mini album softly shine.