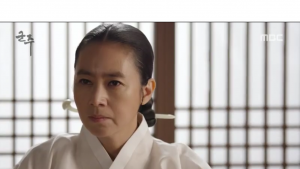 I’ve been saying this for a couple weeks now — Ruler: Master of the Mask is definitely heading towards its finale. After last week’s insistence on perpetuating the love triangle, I was seriously doubting this show, but now I am fully invested once again. Our characters have gotten rid of all pretenses of playing nice and are finally taking some decisive action against each other. We even managed to address a few plot points that have been sitting quietly in the background waiting to be acknowledged. All in all, we’ve had a strong batch of episodes this week, with lots of action and twists, and it’s got me excited for how the end will turn out.

This review contains some spoilers for Episodes 29-32. We kindly ask that readers use spoiler tags in the comments when discussing the episodes that have yet to be reviewed.

We have watched the Crown Prince become a man of great reputation, who is known for righting wrongs and gaining people’s loyalty. We know that he is passionate and can be impetuous, but he has the nation’s best interests in mind. Yet he willingly threw that away in the name of love for Ga Eun, who doesn’t even know what her feelings toward him are anymore. Furthermore, his reckless actions caused Chung Woon to lose an eye and broke part of Hwa Goon’s heart. He ended up forced into an initiation ceremony by Dae Mok, only to be overdosed and thrown into an abandoned field to die. 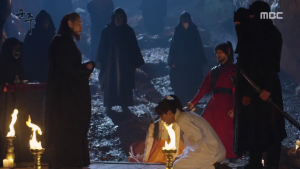 But wait, there’s more. The Crown Prince has finally, finally found the flower fields which are actually not that far from the capital at all. Not only that, we finally get to see the poison immunity from the introductory episodes finally come into play. The Crown Prince should, by Dae Mok’s admission, be dead, yet his name burned on his back and the Crown Prince arose — a little worse for the wear, but he still didn’t die. You would think after he’s come back to life twice someone would think to ask for a body, but no. After he’s left to rot, the Crown Prince comes to and sees the Pyeonsoo-hwe’s guards discarding the bodies of girls soon to die from poisoning. One of the children uses the last of her strength to give the Crown Prince water, urging him to live. This, along with his memories of Yang, gives him the power to continue on and infiltrate the Pyeonsoo-hwe’s stronghold.

Meanwhile, Lee Seon has become a monster under the weight of the crown. He believes himself the true king now with the Crown Prince presumably dead, and does not hesitate to use the power Dae Mok has bestowed on him to put others in their place. He collaborates with Dae Mok to wipe out the Queen’s influence entirely, drugging her and half the court with flower wine in order to control them. The Queen is banished while her brother leads the others to beg Dae Mok for mercy. Lee Seon also takes Tae Ho, who previously persecuted and killed his father, and tortures him in a secret chamber of the palace, much how the late King tortured Lee Seon near the beginning of our story. 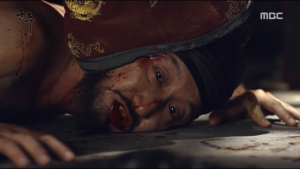 But Lee Seon hasn’t completely turned, giving a glimmer of hope for his redemption. He fabricated a reason for Woo Bo and company to leave the banquet in time to not drink the flower wine. He cried in front of his mother and sister. He continues to make these destructive decisions because of his feelings for Ga Eun. Her refusal to accept him has brought his annoyance but he was able to control it for her. He’s shown to be trying to consolidate his own support in the palace so maybe the end will be like Hwarang and there will be a twist in Dae Mok’s plans?

Though it isn’t like Dae Mok hasn’t had twists of his own this week. His second “murder” of the Crown Prince has broken the ties between him and his granddaughter once again. Though Hwa Goon performs her duties as head of the Pyeonsoo-hwe, she arouses his suspicions with her stoic attitude. However, he still deems her the appropriate person to oversee the intruder incident at the flower field. Before he sends her out they have an exchange about loss, where Dae Mok says that when he lost someone he loved, he took more from the person who caused the lost. With a blank look, Hwa Goon replies, “I guess I take after you after all Grandfather,” and leaves. Not investigating may be the worst move Dae Mok has made.

With Gon at her side, Hwa Goon keeps up the guise of her inspection and discovers the Crown Prince. She helps him rescue not only Chung Woon, but also the children working the fields. She uses her power as head of the Pyeonsoo-hwe and a special whip to stop the guards from following the fleeing fugitives. Yet once they are out of her circle of influence, they continue their pursuit under Tae Ho’s orders. Once the majority of the guards have left the fields, Hwa Goon storms back and sets everything on fire. Her father and others desperately try to put out the flames but they know their efforts are in vain. 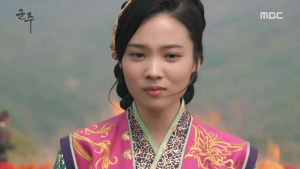 Hwa Goon really has taken after her grandfather. In burning the flowers she has not only taken the source of the Pyeonsoo-hwe’s power, but also significantly sped up the timeline for the next sequence of events. The flower must be ingested every 15 days or everyone who has ingested it will die. Either Dae Mok will have to relent and give everyone an antidote, or there will be a lot of blood in the next few episodes.

Dae Mok has been pushed into a corner. The Queen has been stripped of her influence and disposed of. Lee Seon is grabbing the reins of his tentative power. The Crown Prince must quickly make his move if he wants to seize the throne at the right time. We only have one mystery left to uncover — what did his mother leave the Crown Prince in his greenhouse, and only 8 more episodes remain. Here’s to another week of exciting action!