"Flame in Love": Taemin's World of Ice and Fire 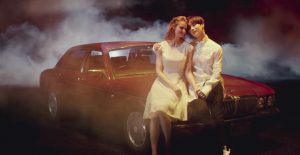 The Japanese market for music may be the second largest in the world, but it’s also a field heavily saturated by domestic acts, and one that requires regular promotion cycles to maintain a solid footing. New K-pop acts have generally struggled to stay relevant since the wane of the Hallyu’s halcyon days. Putting aside the recent success of TWICE, the most enduring and well-known Korean groups in Japan tend to be ones that were fashionable at the height of K-pop’s trendiness – acts such as Big Bang, DBSK/JYJ, and SHINee.

That SM Entertainment would capitalize on this and turn Taemin into a soloist comes as no surprise: he was always the most popular SHINee member among Japanese fans, and consequently the designated face of the group for Japanese promotions. Now, following the successful debut release “Solitary Goodbye,” which managed to reach #3 on Oricon’s Daily Album chart, Taemin has returned with the similar single “Flame of Love.”

As the logic goes, if it ain’t broke, why fix it?

Insofar as Taemin is more a dancer than a singer, the MV is closer to a performance video sketching a story through movement. SM is almost overly intent on selling Taemin’s dance abilities – the way the company similarly did in BoA’s Japanese releases – and the effect is that the music tends to feel secondary, rather than complimentary, to the visuals. But given that Taemin’s voice tends to be clean and straight, lacking the musicality vital to coloring ballads, it’s not a bad decision to up the drama in the form of contemporary dance.

Like “Solitary Goodbye,” the choreography for “Flame of Love” was done by Koharu Suguwara of Urban Dance Camp fame. The signature of her theatrical, full-bodied movements is visible here as Taemin reveals the anguish of one remembering a former lover. Every detail in the MV has been carefully chosen to augment these motions: there’s the Comme des Garçons-esque wardrobe with flying embellishments of ropes and ties, as well as extravagant CG elements of fire and ice.

The strikingly literal interpretation of the song’s lyrics (“Fragments of love will soar again like fiery sparks”) give the storyline a supernatural bend to engage the audience’s imagination. And it works smartly in this abstraction as a dance, asking viewers to fill in the narrative details while dazzling them with lush scenes of women bursting into flames, and beds of crimson rose petals. Interspersed by swelling strings and a haunting celesta melody, “Flame of Love” sounds, feels, and looks like a modern gothic romance that could belong to the Rozen Maiden OST.

This fantasia through dance also remains structurally parallel to the “Solitary Goodbye” MV, in which CG is used to set Taemin against an epic stage of volcanoes and waterfalls. But if anything, these similarities only reveal the great care that has been taken to honing Taemin’s image as an artist in Japan. SM knows it isn’t breaking boundaries, nor going for mass appeal here. Rather, they’ve managed to find an alternate narrative, designed satisfy the dedicated fans who will consistently shell out for Taemin’s career.

Taemin Exceeds Expectations and Leaves His Last Mark with “Advice”