Side B: Saying Goodbye to Sistar 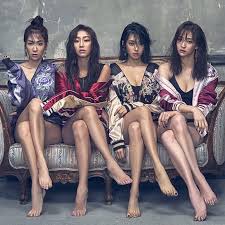 We’re halfway through 2017, and the legendary girl groups keep on falling. This time, it’s Sistar who have taken their last bow. However, there are three things that can provide solace for Star1s: that Sistar has had the classiest and most good-natured disbandment in a long while, the lovely and heartbreaking goodbye stages, and their music. Sistar has been one of the most consistently active groups of their generation, always making at least one comeback a year, and they have left behind a treasure trove of musical gems. We’ve already talked about Sistar’s earlier b-sides, but their later works deserve just as much lauding.

The closing track from Alone, “Girls On Top” shifts gears from heartbreak into a post-disco girl power anthem. The opening of “Girls on top, it’s the time to rock” against a funky bassline immediately grabs the ear. Disco synths then pick up on that bassline and expand it into a true banger, all while Sistar delivers confident, strong vocals. The verses are more relaxed and slide into the groove; but every time that chorus hits, it makes you sit up and start singing.

Off their second album Give It To Me, “If U Want” is a rare chance for Sistar to show off their more vulnerable sides. In contrast to their more bombast-ladden tracks, “If U Want” is both simpler and sweeter, built around delicate synths and with touches of guitar. All of this makes the perfect backdrop for Sistar’s open, earnest delivery as they lay their hearts bare. The hook of “If U Want” perfectly captures the duality of possibly getting the love they want or getting shot down, with no hint as to how it turns out. “If U Want” is subtle, brave, and beautiful, all in one song.

“Miss Sistar” might just be Give It To Me’s intro track, and only feature vocals from Hyorin and Bora (plus Jooheon of Monsta X and Duble Sidekick), but it is killer. This is Sistar in a nutsell: sexy, confident, and earworm-y as it comes. The groove is tight, the production is sleek, and the vocals are jaw-dropping. Hyorin’s dip into a rougher delivery is amazing, and Bora’s harmonization is flawless. Really, the only issue with “Miss Sistar” is that it’s too damn short.

“Sunshine”, from EP Touch N Move, is a rare track; one that is disjointed, yet sounds good. It’s always shifting, slipping from a laid-back mid-tempo jam, to a disco hit, to a genuine ballad, and back again. It’s almost as if ping pong was given a musical form, but in the best way possible. The constantly shifting tempo and vocal shifts from soft into powerhouse and back again feels like a roller coaster, thrilling and carefully planned to pull you into its world. Every time it seems like “Sunshine” has gone off the rails, the line “you put me back together” appears, acting as anchor for the production and giving “Sunshine” a feeling of being just smack-dizzy in love.

Ironically, Sistar doesn’t have many great ballads, despite having two known and respected vocalists. More ironically, “Say I Love You” has minimal vocal showboating yet blows their other ballads out of the water. The emphasis is on the tone and emotion behind the delivery, with Sistar sounding very soft and gentle, yet with a core solid steel as they sing, utterly confident in their love. The warm guitar and subtle production flourishes serve only to draw the ear back to the voices of Sistar, resulting in a piece that just resonates through the audience.

“String”, like “Say I Love You”, is off of Sistar’s last EP, Insane Love, and also like “Say I Love You”, it lets the members venture into the less-explored. In the case of “String”, it’s funk — complete with a phenomenal horn loop. “String” shows Sistar in their element: powerful, confident women who just luxuriate in their own glory. Their vocals shift from bratty, to calm, to arrogant, all paired against a bouncy track that sucks in the listener with its ’70s throwback bassline, and the killer stutter in the pre-chorus.

Sistar has left behind a wealth of music, and this barely scratches the surface. A huge, extra-honorable mention goes to “Holiday”, which was mentioned in the previous Sistar Side B, but honorable mentions go to “Bad Guy” featuring Mad Clown, “Go Up” and “Bad Boy”. If there are any standout B-sides that I didn’t mention– and I know there are– please leave them in the comments!