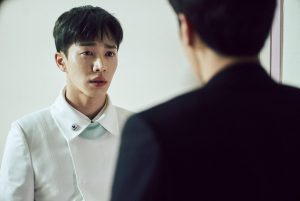 In the Friday and Saturday timeslots, tvN dredges into the link between a nostalgic past and a familiar present, à la Chicago Typewriter. Now, on Mondays and Tuesdays, we get another promising title courtesy of tvN, built on the premise of an imagined high-tech dystopian future with tie-ins to the present time — Circle: Two Worlds Connected.

In the realms of literature, anime, and HBO shows, sci-fi is a staple — a genre whose popularity and commonplaceness could easily slot it as mainstream. And yet, sci-fi appears to be an anomaly in the K-dramaverse. In fact, Circle is (to my knowledge) the first drama thus far that can be neatly classified as science fiction. Therefore, by taking on this virtually non-existent K-drama category, the creators of this show are essentially plunging headfirst into uncharted waters, which comes with an obvious set of risks and consequently merits some praise.

Nevertheless, praise based singularly on the unorthodoxy of this show’s genre — without taking into consideration of the execution of such a premise — would be shallow, and doesn’t warrant much content for an in-depth review. Circle deserves better than that. With its unique storytelling format, leaving a lot of unanswered questions about plot points and characters, the viewer is left on the edge of their seat; eagerly anticipating the following set of episodes. Its first four installments also hint at a comprehensive exploration of the ideas of memory and negative emotions in correlation, respectively, to happiness and criminality — possibly promising intellectual fodder for the more analytical viewer.

The present and future timelines are divided into two segments, with the former being titled the “Beta Project” and the latter called the “Brave New World. ” The name of the future timeline is a possible reference to the dystopian novel of the same name, assuming that there wasn’t any mistranslation in the subtitles on the site where I was watching the show.  The assignment of the name “Beta Project” to the present implies that the present timeline is some sort of experiment; perhaps the second in a series of trials, hence the choice of the word, “Beta” rather than “Alpha.” 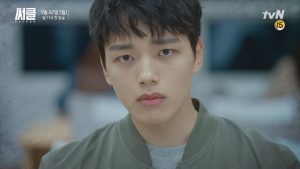 The narrative switches back and forth between the present and the future, sprinkling in a fair share of characters and plot points shrouded in mystery. The identity of the chairman of the Big Brother-esque organization, Human B, is obscured for the moment, with only a vague hint as to who it might be. The audience is also currently kept in the dark as to who, or what, “Bluebird” exactly is. We have no idea how Smart Earth, Human B, and the emotion-regulating Stable Care System came into fruition, or what aliens and the university suicides have to do with any of this. This creates a disorienting effect that causes the story to be difficult to follow at times.

Nonetheless, this isn’t necessarily a bad thing. Actually, it is reminiscent of Quentin Tarrantino‘s storytelling style, famous for its ability to captivate audiences and keep viewers hooked on the plot. Many similarities can be found in Circle’s narrative format to the likes of Pulp Fiction, in that both lack any kind of prologue or introduction spoon-feeding information about the setting and characters to the viewer. Rather, the overall plotline is revealed in a slow, painstaking manner, gradually connecting the dots between the seemingly isolated storylines and characters. 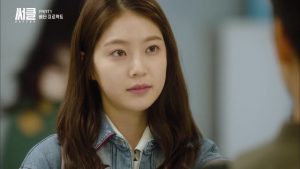 The show likes to twist viewers’ expectations by leading us to believe certain things, only to later pull out the rug out from underneath our proverbial feet. It did it once with Yeo Jin-goo, as the stoic modern day college student Kim Woo-jin, whose rubix cube habit is frequently the focal point of the camera shots. Kim Kang-woo, the snarky detective in 2037, as Kim Joon-hyuk, also oftentimes fiddles with his rubix cube, which leads the viewer to come to the conclusion that Joon-hyuk has to be the future Woo-jin, only with a changed name and identity. However, a childhood video later reveals that Woo-jin’s twin, Beom-gyeon (An Woo-yeon) also has a habit of playing with a rubix cube. And sure enough, Beom-gyeon was Joon-hyuk all along.

It did it another time with the character Han Jeong-yeon (Gong Seung-yeon) by leading the audience to the conclusion that she was an alien due to the uncanny similarity in her appearance to an alien woman in the twins’ past. These expectations were subverted by showing that she could feel emotion, unlike the alien of Beom-gyeon and Woo-jin’s memories. And then finally, the drama cements the fact that she was, indeed, the alien we see in their flashbacks, dropping the bombshells in episode 4 that she owned the twins’ dad’s old suitcase and that she lost her memories — possibly explaining her change in personality. 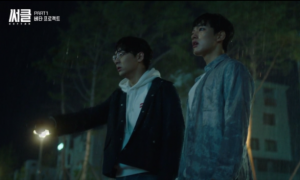 All these twists and turns, as well as the storytelling style, ensured that getting a tight grip on the interest of viewers was no issue for this show. Hopefully, the later episodes continue to grab the audience’s attention by raising new questions, and giving refreshing answers to the old ones, continuing down a Tarrantino-esque fashion by intricately weaving together the seemingly unconnected pieces.

Nonetheless, just the same way that an aesthetically pleasing food platter doesn’t automatically equate to a tasty meal, a good storytelling format alone doesn’t make for an interesting and content-rich show. Luckily, Circle does not fall into this predicament by taking inspiration and thematic influences from acclaimed works of science fiction.

Now, we all have unpleasant memories that we like to push out of our heads. But we’re forced eventually to accept the fact that, inevitably, these memories are stuck with us for life. We make do with it what we can, employing various coping mechanisms to deal with the negative feelings that come along with these memories. But what if, we were told that we didn’t have to go through all this pain anymore and were given the option to erase these bad memories once and for all? What would be the long-term implications if we chose to take this option?

According to the American TV series, Westworld, the implications would be negative. Throughout its ten episode duration, Westworld constantly pushes the idea that our memories are crucial to consciousness and individuality, enough to even define the subtle, but tantamount difference between humans and human lookalikes. 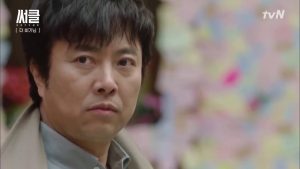 On the other hand, Circle doesn’t have a definite stance on the importance of memories just yet, and the ruminations it has on this subject so far has only proved to be surface level. However, it does insinuate that it will eventually probe into this topic more intensely. The show displays characters with differing opinions on the subject of memories. Joon-hyuk seems motivated to take back his past memories in order to attain a sense of self. On the opposite end of the spectrum, Lee Ho-soo, played by Highlight’s Lee Gi-kwang, makes it clear that he wants to keep his memories erased out of fear of what might happen if he regained them. Human B appears to be dedicated to keeping Smart Earth’s citizens’ memories repressed, so their philosophy is obviously in line with Ho-soo’s. Ideally, the reasons and implications of these different characters’ philosophies will be analyzed more deeply as the series progresses.

A parallel can also be drawn from Human B’s Stable Care System with the Sybil system in the anime Psycho Pass. Both are built on the ideology that negative emotions, such as anxiety and anger, lead to criminality. The Sybil system monitors these emotions, while the Stable Care System regulates them. After examining the different nuances of this philosophy throughout the series, Psycho Pass demonstrates in the end that this line of thinking is erroneous. Hopefully, Circle follows a similar path to Psycho Pass in regards to analyzing the correlation between emotion and criminal psyche, coming up with its own unique take on the idea in the end. 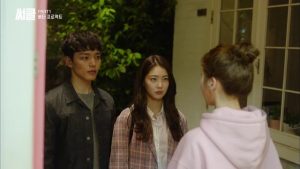 In a heated discussion with Joon-hyuk, Ho-soo exclaims that he simply wants to be happy, even at the expense of having his memories withheld from him. I think it would be interesting if the show examined this idea further. An extension could be drawn to the novel Fahrenheit 451, concerning the exploration of the relationship between happiness and a lack of knowledge. In Fahrenheit 451’s case, the knowledge being withheld is the type one receives from books, while in Circle’s instance, it’s past memories. It would be fascinating to see the drama take Fahrenheit’s lead and explore the relationship between ignorance and bliss.

The characters’ motivations and reasons for acting the way they do are a bit unclear as of now. For instance, we are shown that Woo-jin as a small child is cheerful, and firmly believes that the woman he, Beom-gyeon, and his father encounters is an alien. Meanwhile, Beom-gyeon doubts this. Fast forward into their college years, and their beliefs about aliens are reversed and Woo-jin becomes an aloof and unapproachable person. The reason for this is not yet explained. The rationale for Jeong-yeon’s memory loss and subsequent gaining of emotions is also not touched upon yet. The future episodes will hopefully flesh out the characters’ motivations and beliefs while developing them further. 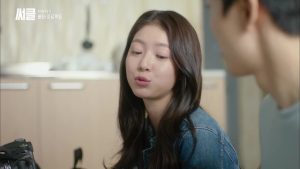 We easily see our characters’ personalities through their relationship dynamics. Take a glance at the popular, empathetic, and outgoing Jeong-yeon, who is so shaken by her close friend’s suicide that she embarks on an extensive investigation of the university murders and is moved to tears simply by talking about the event. Contrast her to the dettached Woo-jin, who takes a test despite all his classmates boycotting it in the name of protesting the school’s policies and callously asks to take his senior’s spot in the school research team immediately upon hearing about his death. And yet, we are shown that there is a different side to Woo-jin, one that can’t help but grin while watching Beom-gyeon working at a bakery and sheds tears upon seeing the extent of his older twin’s obsession with aliens.

As for the filming and editing, it was a bit strange that night was associated with the “Beta Project” while day represented the “Brave New World.” Perhaps the filmmakers wanted to draw attention to the fact that the present day was primordial and undeveloped compared to the advanced future, which is alluded to by assigning the name “Beta Project” to the present, since — as mentioned before — it implies that the present was part of an experiment. This was a bit perplexing since the edit appears as if it was trying to imply that the future is better than the present, while the series itself seems inclined to say that the future is not superior to the present — shown through all the flaws and corruption within Smart Earth and Human B. Perhaps this will make more sense as the drama goes on and reveals the backstories behind both settings.

In general, the first four episodes were confusing, but engaging. The show definitely contains the potential to become a compelling and cerebral watch. To translate this potential into reality, however, the next episodes have a lot of work to do in terms of connecting plot points, answering questions, developing characters, and fleshing out themes.