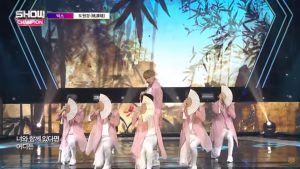 It’s time for another edition of Best of Weekly Music Shows! This week is filled with highs and lows. More groups are making their comeback, so our summer playlist will enjoy a refreshing boost of energy. Astro and April returned to bring sunshine in our lives while Elris made their debut. Sadly, this is also the week in which Sistar gave their final stages together. Although there’s a likely chance we’ll see them promote individually, they’ll continue holding a special place in our hearts as one of our favorite girl groups.

Twice continues to dominate the music shows with their wins on MBC Show Champion and SBS Inkigayo. However, Seventeen isn’t to be overlooked with their victories on SBS The Show and KBS Music Bank. It’s deja vu since both groups got their first wins while promoting at the same time last year. Congrats to all of them!

It wasn’t easy making a list this week because Sistar decided to perform a medley of their hits and mess with my feelings. I do love the increased energy everyone has for the summer. It makes for more upbeat entertainment, which I always welcome. That said, let me share my picks.

This group is so charming and adorable. It’s amazing to see a group this young exhibit such confidence on the stage. There are groups with older members that don’t demonstrate as much charisma as these fluffy teens. They know how to give fan service to the camera and exude this fun energy that’s infectious. The member interactions are the best part of this performance. I can’t help smiling anytime I watch them. They’re just so freaking cute and talented! It’s going to be interesting to see how they progress with age.

This choreography is so perfect. I don’t know a time when I have ever disliked a Seventeen stage. Given the large size of their group, it blows my mind how synchronized they are. I had to pick this performance mainly because it shows off the intricacies of this dance best. You can see every beat and measure of the music matched to their movements. No matter how many times I’ve watched this routine, I never grow tired of its complexity.There’s always a new detail to find, and I love a good Easter egg hunt.

Just gonna put it out there — they fine as hell. I mean, ridiculously attractive. I can’t accurately express the full range of emotions I feel watching them do this routine. I’m in love with the setting and their styling. They look like dancing cherry blossoms in their baby pink jackets with cream colored suits. Of course, we must point out this fabulous fan choreo. Using props for any dance is such a bold move, especially when they’re something as cantankerous as fans. I can’t imagine the hours they spent fine tuning every move, but it most definitely paid off on stage.

This group is dangerous for my weak noona heart. I can’t handle them when they’re like this. Do you see this choreo? Do you see how sharp and smooth it is? How do they do that? The song is catchy and their styling reminds me of the musical Newsies. I loved the part where the members formed themselves into a human desk. One thing you can say for sure is that Seventeen’s routines are always creative and fit the music perfectly. It’s things like this that make one ready to attend their concert.

Now this is how you send off a group! I was never the biggest Sistar fan but hearing about them disband saddened me beyond expectation. I figured I had gone through most stages of grief until I watched this medley. Once they began singing “I Swear” it was game over. Ugly crying was followed by angry fists cursing the K-pop gods. Regardless, what’s done is done, so we may as well appreciate what Sistar gave us in the last seven years. I adore these ladies and feel so grateful that they shared their music with us. I can’t thank them enough for giving us one last week of sweet memories. I’m going to miss you, Sistar!

What were your favorite performances last week? Are you going to miss Sistar? Comment below!