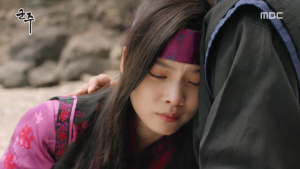 We’re starting to build up toward the real conflict of the series now. Dae Mok is feeling threatened by this Chief Peddler, a man he doesn’t know, and feels pressured to keep hold of the power he has. Our Crown Prince has a victory under his belt and is steadily working toward regaining his crown. The Queen is working on her own plans for the throne, and Lee Seon continues to struggle against the yokes of the Pyeonsoo-hwe. There’s no shortage of drama and we’re going to have to take sides eventually. Who will end up with the crown? Who will be the true ruler of Joseon?

This review contains some spoilers for Episodes 13-16. We kindly ask that readers use spoiler tags in the comments when discussing the episodes that have yet to be reviewed.

Alliances are being drawn and who people decide to align themselves with will certainly affect the throne in later episodes. The Crown Prince, of course, must be most careful when choosing his players. So far he’s positioned himself well. He’s managed to plant Woo Bo in the palace as Minister of Personnel along with Moo Ha as his assistant, giving him ears and eyes in the palace, as well as a base to build his council for when he takes the throne. Woo Bo’s appointment means that they can begin weeding out the Pyeonsoo-hwe members in position around the King, replacing them with those loyal to the Crown Prince. 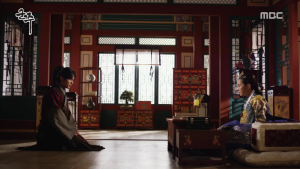 Furthermore, the Crown Prince has put his lot in with the Queen. By going through her to deliver the copper to the Ministry of Finance he has shown her that he is a force to be reckoned with. He has openly defied Dae Mok and the Pyeonsoo-hwe, making true the adage “the enemy of my enemy is my friend.” His trust in her is not complete, as he does not reveal his true identity or state his true purpose in helping her, but neither is her trust in him. She can see his resemblance to the old King, and has her suspicions about his origin, yet does not outright question him. Perhaps later on we will see how deep this alliance is.

The Queen has her own alliances as well. Besides her new affiliation with the Crown Prince, she has her own family member deep inside the Pyeonsoo-hwe. Whether or not he is suspected of passing information about the organization is unclear, yet he seems uninhibited in visiting her and telling her of the group’s plans. His subtle attempts to aid her are not challenged, neither are his small celebrations at her victories acknowledged. How long this will last remains uncertain, but for now she has this strong tie to help her defeat her enemies.

Needing eyes and ears in the palace has also made the Queen turn to Ga Eun. The Queen wants to elevate Ga Eun to a court lady, putting her in the position to report to the Queen any gossip she may overhear. While this means helping the Queen dethrone the current King, who Ga Eun still doesn’t know is her friend Lee Seon, Ga Eun doesn’t care as this will be the payment for the Queen restoring Deputy Magistrate Han’s reputation. The Queen merely wants a spy and does not realize that once Ga Eun realizes the King’s true identity, this move may backfire on her. 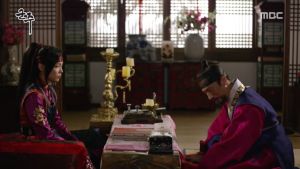 The person whose loyalties will probably matter most is the person who has the messiest web to untangle. Hwa Goon has pledged to help the Crown Prince in his plan to thwart the Pyeonsoo-hwe’s copper smuggling ring, yet when her bumbling father is shown to be the ringleader, she goes against her promise to help him escape. She admittedly feels guilty about this betrayal but her love for her father overwhelms her love for the Crown Prince. Later, as she watches the Crown Prince being attacked by her grandfather’s men, she faces a similar dilemma…family or her first love? Seeing him protecting Ga Eun so fiercely gives her pause, but she ultimately sides with the Crown Prince, sending up a flare and saving him after he’s wounding. She even berates the attackers for messing with her reputation, caring nothing about the fact that they were under Dae Mok’s orders.

Hwa Goon will become one of the most important characters as the battle the Crown Prince and Dae Mok and the Pyeonsoo-hwe comes to a head. Where so far she has been able to play both sides while keeping her connections to either side hidden, it is inevitable that she will be outed and then forced to choose a side. Her grandfather has betrayed her once, causing her to cut ties with him, yet the Crown Prince’s obsession with Ga Eun gives Hwa Goon pause. Whichever side she ultimately comes down on will have a powerful ally, while her enemy will have someone who knows most of their secrets working against them. Hopefully, things end well for her. She may be the “villain” but she’s also the character that’s easiest to root for of them all. 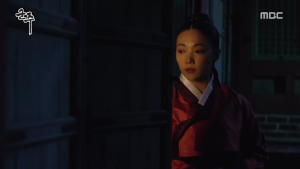 Let’s not forget the newest player to our game. Mae Chang’s role as a spy has been confirmed, shown as she flashes a pass and enters the court to tell an unseen court lady that the chief peddler is indeed the Crown Prince in disguise. But exactly who is Mae working for? The Queen, or some ambitious courtier? What is her agenda? And with her knowledge of things she shouldn’t have knowledge of, is she going to help our Crown Prince or be a step toward his demise.

Ruler: Master of the Mask is setting up for the epic battle. With nearly half the drama over, the way things will come to a head is slowly starting to make sense. Though we are sure to be in for a few more twists and turns, here’s hoping all our characters choose the right side as we head into the next round of the game of chess this drama has become.