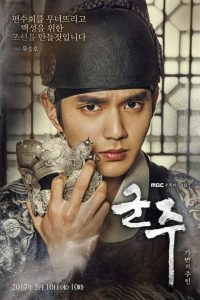 After Hwarang: The Beginning and my mixed feelings about that drama, you’d think I’d stay away from historical dramas, yet here we are with Ruler: Master of the Mask. The pull of political intrigue, The Prince and the Pauper storyline, and big names of Yoo Seung-ho and Kim So-hyun have have drawn me back into the K-drama world, and honestly, this is already shaping up to be a drama I can really get behind.

The drama introduces so many characters that at first it’s hard to decide who is going to be important and who is going to be emotional fodder, but with one minor exception it seems like they all will continue to play important parts going forward. The drama makes quick work of setting up the dynamics of the relationships between all the power players.

We begin with what will be the overarching power struggle of the drama, that of the Pyeonsoo-hwe and the Royal Family. Unfortunately, the King (Kim Myung-soo) is part of the web the insidious organization has spun, but is trying to ensure his son, Crown Prince Lee Seon (Yoo Seung-ho), doesn’t follow in his footsteps. This doesn’t sit well with the Pyeonsoo-hwe’s leader, Dae Mok (Heo Jun-ho), as he needs the crown under his control to continue his reign as the true power of Joseon.

Crown Prince Lee Seon has no idea why he’s been forced into wearing a mask his entire life. Since the poisoning attempt on his life as an infant, he’s worn the mask at his father’s orders, but its burden is starting to weigh on him. It doesn’t help that anyone who sees his face is to die (Hwarang much?). With no answers from his father and the burning need to do something besides hide away in the palace, he escapes to find Woo Bo (Park Chul-min) the scholar who helped cure him as a child and hopefully learn the secrets of the mask. 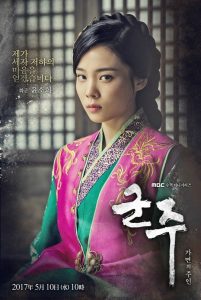 The Pyeonsoo-hwe need a person’s name and face in order to make them beholden to their will, and so the mask thwarts their plans. However, the Hwa Goon (Yoon So-hee), the granddaughter of Dae-mok, has seen the Crown Prince’s face. She’s unwilling to give up her information just yet and it seems as though she has her own motives regarding the Crown Prince, that at least extend to becoming Crown Princess. We see her obsess over him after their first meeting and she goes so far as to stab herself so that they have matching wounds. She also purposely misleads the Pyeonsoo-hwe’s assassin Gon (Kim Seo-Kyung) so that she may track the Crown Prince alone.

…And here’s where things start to get a little messy. While looking for Woo Bo, Crown Prince Lee Seon starts a fight with the water carriers of Yangsucheong, the face of Pyeonsoo-hwe who has privatized the country’s water supply. Crown Prince Lee Seon escapes with the help of Han Ga Eun (Kim So-hyun), who is revealed to be one of Woo Bo’s students. On the way to Woo Bo’s house, they stop in the slums where they pick up another student–Lee Seon (Infinite’s L, or Kim Myung-soo). Lee Seon was one of the water carriers from earlier and the two definitely remember each other. Their animosity is tempered by Ga Eun’s presence and the trio journey on to Woo Bo’s house.

Woo Bo has fallen far from his palace days and Crown Prince Lee Seon is not ready to accept this man as his savior. Neither is Woo Bo ready to give the hot headed Crown Prince any answers until the young man can see the world for what it really is, which includes learning of the Pyeonsoo-hwe.

The major characters of the drama have all come into focus, with some of the minor characters–Chung Woon, the general’s son and Crown Prince Lee Seon’s confidant–coming into their own as well. So far, Crown Prince Lee Seon has shown himself to be naive and pampered, but has a strong sense of justice that is often seen in later episodes of historical dramas. This is mirrored in the poor Lee Seon, who has an obvious anger problem that is commented on by multiple characters.

The female leads, on the other hand, juxtapose each other. Where Hwa Goon is secretive, cunning, and prickly, Ga Eun has shown to be feminine and helpful. Even the way the two are styled are opposite, with Hwa Goon shown in darker colors like purple and blue, and Ga Eun in white and pink. How their interactions will turn out will be intriguing, especially with Hwa Goon seemingly vying for Crown Prince Lee Seon’s heart.

Meanwhile, as promotional materials will have us believe, Ga Eun’s father will meet a bad end thanks to Crown Prince Lee Seon’s meddling. There’s set up for a love triangle between the Lee Seons and Ga Eun, but I’m sure it’s going to be hard to love someone who caused the death of your last family member. This is only speculation, however as it has been advertised as a major plot point, it is sure to come up soon.

And finally we come to the two Lee Seons. The Prince and the Pauper as it may be. The Crown Prince Lee Seon gives commoner Lee Seon his jade pendant, symbol of his rank, as well as a promise–the Crown Prince will avenge the commoner’s father’s death. This is an important object to give away as well as a powerful promise. The basis of the rest of the drama rests on this promise, and with the Pyeonsoo-hwe’s assassins right outside, it looks like the trouble is just beginning. 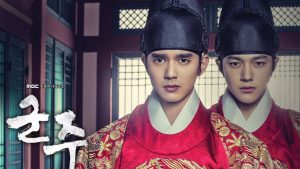 All in all, Master: Ruler of the Mask has passed the “four episode test” with it’s premiere episodes. Not only has it set up the basic relationships on a reasonable level, it has given characters to root for, a believable villain, and intrigue enough to keep viewers interested for the next round of episodes. For episodes 5-8, I’m hoping for more focus on the female leads–Hwa Goon in particular– and learning more about just how far the Pyeonsoo-hwe’s influence reaches inside the Imperial House.

What about you readers? What were you thoughts on the opening episodes of Ruler: Master of the Mask? What are you looking for to this week?