As a viewer with no knowledge of Hitchhiker and minimal real NCT knowledge, (except a fondness for NCT U’s “The 7th Sense” and NCT 127’s “Limitless”), I was curious to see what NCT’s Taeyong would do in a solo track and collaboration.

Long story short, the experience was… overwhelmingly confusing. There was a clear sound and visual aesthetic, and while 55,000 people liked it according to YouTube, to put it bluntly I spent most of the 2:25 minutes feeling agitated.

To begin with, the opening has a distinct sound from Hitchhiker that could go very well, in terms of iconic, but could also be incredibly obnoxious. According to SM, it’s a mixture of “base music and trap genre”. Alas, instead of changing or building, the sound simply adds more, and becomes a cacophony of noise. If you set up a keyboard where each letter plays a different sound, and then unleashed a cat on it, this is the result I imagine you’d get. I’m confused — why would you use this as a base for a track? You’d need an exceptional singer and production to overcome this major disadvantage.

The visuals too are quite distinct. A series of real life scenes in neighbourhoods are blended with edited in items. Not only do the items themselves look super cheap, but due to the deliberate design, they come off as blurry and indistinct, while the background scene is clear. Your eyes try to focus, but they can’t, and even the elongated font at the beginning is deliberately a little difficult to read. It’s a bit like someone paid for a designer and said “I have $50, what will that get me?” and the reply was “I can copy over some dancing images from a game I designed in ’92, but make ‘em shinier?” and that offer was accepted. The visuals, are bewildering, and only become more mismatched when poor Taeyong looms in the background.

When Taeyong’s rapping comes in, it’s a pity, because his vocals and his presence are a poor fit for the backing track. I like Taeyong’s voice and style, but his voice isn’t quite deep enough or distinctive enough to overcome the music in that first line. While it gets moderately better, at this point, the bar is set low. Taeyong’s rapping is no doubt supposed to sound cool and apathetic – a sort of lethargic “devil may care” attitude, but whereas in “Limitless” it comes off as cool, in “Around”, due to the music, it just sounds it just sounds monotonous and uninspired. The combination of these particular sounds leaves me honestly perplexed. 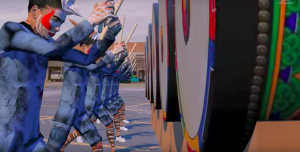 Taeyong does an admirable job throughout this track of pretending he’s rapping something that he can be confident about. The problem is that Taeyong doesn’t have the things that usually make rappers confident on their own: a history of underground rapping, well known rapper connections or collaborations. The thought that he might be confident on the back of these lyrics and this track is puzzling. SM calling his rapping “powerful” is a slight over-exaggeration, but if nothing else, he’s a fantastic actor.

Now considering the lyrics, it must first be acknowledged that my Korean extends to “The pen is on top of the chair” and “My name is Carly”. At the same time, I’m not being paid to write songs, so when I see lyrics like “Real deal dear, yes feel real”, my first reaction is “Wait… what? … Why?” . Trying to gain insight into the Korean lyrics is a somewhat futile endeavour – there are slight variations on the English translations but none of them make any sense to me whatsoever.

DROP THE BASS ON
You’re all lobsters
Cooked red

By the time Taeyong’s chanting “binguel binguel” monotonously, I feel like maybe I’ve been watching this for years. Am I sweating? My head is bingeul bingeul. Chanting is in the background. Rainbows are flashing. Some sort of instrument is clashing vaguely with everything in general, which is definitely clashing with everything else in general. Silver shape man is dancing awkwardly on the screen. My ears are burning and my eyes are watering. Taeyong’s rising in the background in a hoodie with a strange face and what does “I am charming Spidey” even mean?!

What does any of it mean?!

Seeking understanding, I ask the question “Who is Hitchhiker?”. Looking into the SM Station Hitchhiker releases, I realise I can blame everything I passionately dislike about this song on Hitchhiker. The sounds are very similar, the images borderline identical (Did they reuse cut footage from the “$10” MV to make “Around”?) and the lyrics minimal to absent. And yet, while Hitchhiker’s other songs are definitely not my style, none of them cause me the active pain that “Around” does. None of them have quite the clashing overload of sounds which just don’t gel.

This clip lacks everything it needs to standout in a positive way- no catchy music, no epic vocals, no dance, no inviting MV, no star power aside from Taeyong. 55,000 people like this, but I wonder if they like the song, or whether they are just supporting Taeyong? It’s disappointing to see Taeyong receiving this track after gaining an opportunity to branch out– I’d like to see something more supportive of his talents. It’s good to try new things and gain some variety, but it’s also good to cut your losses.

This song, in my opinion, is a loss.