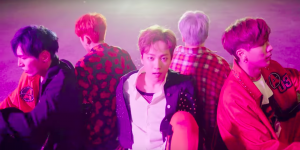 Having loved B.I.G’s “Are you ready?”, I jumped onto “Hello Hello”, ready to be impressed. “Are you ready?” was catchy, interesting, and showcased the members well. It had a great sound, good production, interesting “real life” neighbourhood visuals and effective close ups to show members’ personality. Likewise, “1.2.3” had an interesting location and plenty of member closeups to keep things moving.

Unfortunately, “Hello Hello” does not retain any of it’s predecessor’s strengths and can, at best, be described as ‘bland’. The problem really, is that they did everything right in “Are you ready?” and eschewed all of it for “Hello Hello”.

So, where are the issues? Musically, “Hello Hello” is sound. It’s quirky, pretty catchy, and with a good MV, could rise to the occasion. While not an instant knockout hit (having a low-key, general sound) the vocals are strong and complement the backing track. The problem is the track could and should really have been elevated by the MV. It reminds me a bit of Seungri’s “Gotta Talk To You” and Shinhwa’s “Sniper”, which are understated and musically subtle as opposed to vocal powerhouses, but they are excellent songs, backed up by interesting MVs. Unfortunately, nothing seems to match in this Performance MV, and as a result, it weakens the song rather than strengthening it.

Visually speaking, it just doesn’t seem like GH Entertainment put much effort in. B.I.G. dance in what looks like a hangar, and they wear red — that’s about the extent of it. That setting is the kind of plain reserved for a special purpose; the kind you might use to highlight strong choreography, a particularly bold element such as acting out a romance or fight scene, or striking visuals using costuming or props. The link there though, is strong, and neither “Hello Hello” nor the Performance MV have that kind of strength. GH Entertainment, take note: flashing lights do not replace personality! When we do get the occasional close up in this MV, or focus on a member, they tend to look blank, rather than seductive, charismatic, angry or betrayed. 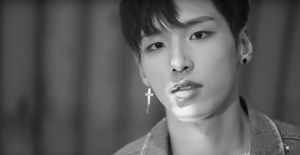 B.I.G. are not a dance group in the sense of being spectacularly talented dancers. Their moves are not particularly sharp or well executed, though they’re in time. For this reason, the choice of a Performance MV is odd. With good choreography, a different setting or focus, this wouldn’t be an issue, but in a Performance MV, it shows all too clearly. The choreography is fairly unremarkable; there’s nothing super distinct, catchy or wowing. One move, where they bob down and then stretch up (at the 1:15-ish mark) is quite unique, but is not repeated or capitalised on. Some parts look like they should have some force to them, like bringing their hands down in fists, but simply don’t. They say “dangerous” and we focus on them dragging their feet or sliding to the side with their arms out. That’s not dangerous, that’s below-average choreography.

One of the key problems here seems to be a lack of clear focus on a theme; instead clashing aspects of the MV lead to confusion. The sound and their choreography could have drifted into a relaxed feel– especially with what feels like a laidback dance style and energy, and lack of any real acting. Yet the hangar scene, red and black colour scheme coupled with the flashing lights would be more at home on a fiercer track and they feel out of place.

Likewise, the costumes show a similar lack of cohesion. We’ve got plaid shirts, jeans, hoodies and tracksuits, totally at odds with fishnet, fringes, ripped black pants and the odd dangling strap of fabric I expect to see in a VIXX MV. Yes, the red colour scheme has a connection, especially their lyrics “red lips”, and Benji’s red hair, but honestly, it feels like the absolute minimum effort was made here. It should be noted that the English is also confusing; certainly as an English speaker I am rather bemused by lines like “Ay B.I.G. in the house babe I got your back brother”, “don’t close to me” and “girl I want to see your colors, it’s not a true colors”. 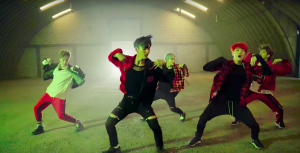 Realistically, there were two good options for the direction they should have taken this in- either powerfully angry and defiant, in the ending of a toxic relationship, or seductive, talking about the thrill of desire. They mention a “dangerous” love, saying “Gotta get your love, oh I’ll make it over tonight”, but don’t connect to the lyrics in any real way through facial expressions, dancing or other imagery. The chorus especially would have been a great opportunity to draw fans in with smooth, powerful, sexy moves. Where’s the thrusting? Where’s the body rolling or the hands moving over their bodies? Where is the lip biting and the hooded stares? There’s a definite missed opportunity in the perfunctory way they touch their mouths on the “red lips” line.

We also miss any sense of betrayal or rejection, to show the ending of a relationship. We could easily see a kind of ‘Look what you’re missing out on!’ brand of seduction and rejection, which would mesh with Heedo‘s confident rap. These ideas could have been showcased by better choreography and better acting, or with the help of an actress, or even fan service in the dance with the boys playing off of each other (à la VIXX’s great use of members interacting in “Hyde”). Alas, what we have instead is uninspired dancing, with, oddly enough, multiple shots of their shoes, and several vaguely perplexed close-ups.

With this track B.I.G could could have shown a new side to themselves, or potentially a new level of maturity, but unfortunately, this opportunity was lost. “Hello Hello” is a good song, but as a Performance MV, is only a display of what might have been. 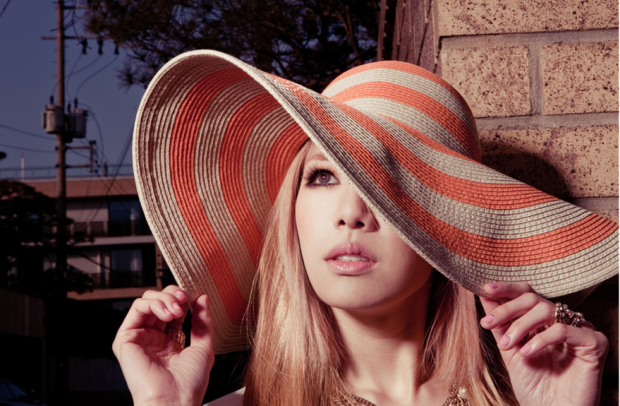