Yesung Begins Spring from his "Hibernation"

Spring has sprung, and Yesung is back! He has a reputation as one of Super Junior‘s power vocalists, and he has consistently proved it through his group work and his solo work. Yesung’s “Hibernation” is a pre-release track for his new album Spring Falling, which drops later this week.

While Yesung has had a tendency to perform emotional ballads with sweeping orchestras, “Hibernation” offers quite the opposite musicality. Similarly, his videos have also followed a pattern of being romantic plots with real-life situations; his songs tend to narrate the situation that the plot describes. In “Here I Am”, Yesung was a character in the story,  while “Hibernation” seems to want to keep him separate from the plot at hand. The toned down nature of the video works to his advantage as the song becomes the focus of the release, rather than the video.

“Hibernation” follows a girl through a day off at home: waking up, brushing her teeth, reading a book, making herself some ramen, and writing in a notebook, until night falls, and she goes to the rooftop with a warm drink and smiles happily to the sky. Yesung himself does not play a role in the video, and never interacts with the girl; he mostly seems to be in a nostalgic train of thought, like he’s remembering things about the girl. In shots where they’re together, he looks occupied in his thoughts as he sings.

While there’s an element of domestic contentedness, the girl seems lonely. In one particular shot, she’s sitting at a table, drinking from a mug and listening to music. Her side profile is the focal point of the shot, which cuts off the remainder of the table. Cutting the shot off has a sense of incompletion, of waiting for something; maybe the girl is waiting for her lover? The lyrics themselves are saying “you’re so beautiful, always think(ing) of you”; there’s a strong sense of longing, but at the same time, a strong sense of contentment. It’s a lovely shot that really couples well with the song to impart this desire of missing someone and thinking of them.

Both on screen and musically, “Hibernaiton” lets Yesung work his magic and allows him to really showcase that voice of his without any distracting angles or flashy camera work. The minimalist setting is shot quite nicely with clean angles and clear lighting. The camerawork is clean and stable, and the simplicity of the video lets the focus be on the song.  The visuals match well with the song’s own elements, as it is primarily acoustic, with subtle blending. It’s well balanced and really lets Yesung’s vocal take center stage, further highlighed by the soft backup vocals and a charmingly non-complex style.

Yesung’s vocals are surprisingly gentle in this song. He has such a strong voice, and constantly comes out with songs that really let his voice fly and dive and showcase the richness of that baritone. His songs tend have a lot of emotional turmoil within them; but “Hibernation” is considerably softer than that, and it allows him do something sweeter with his voice. 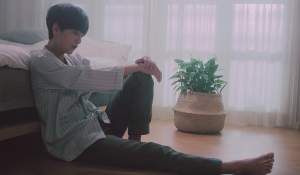 An element of the track that really stands out is that soft little electric guitar in the back. The song as a whole is so mild and peaceful and that could risk it sounding boring; but the guitar in the back adds a little more dimension, and adds an element of playfulness or flintiness to the mixing and really gives the song more life to it when coupled with those supportive vocals.

Furthermore, the balance of the synth really brings the idea of spring to mind: revitalization, lightness, and playfulness. It adds a splash of color to the song and the video. The subtle use of instruments brings life to what could have been a rather bland release. The MV coupled with the song becomes a much more interesting package, getting the viewer to try and piece together the context of Yesung and the female lead’s relationship: Are they lovers? Have they broken up? Or are they just separated and waiting to see one another? It’s rather fascinating: the song does not just have the proper elements that really give it life, but it also gives a single day of domesticity so much more subtext to read into to.

K-pop videos have always been a mixed bag: some are cool, some are weird, some are silly, and some are intensely profound. The best videos enhance their song, and add another layer to them; the worst videos overwhelm the song and needlessly distract. While this video didn’t hit it out of the park, “Hibernation” hits a nice balance. The song and video work together really well, enhancing one another to create a decent package.