Innocence and Guilt in "Nunbal" 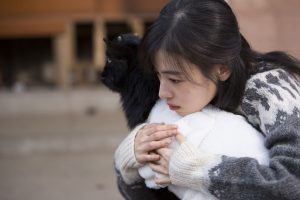 cently made his directorial debut with Nunbal (which also goes by the name of A Stray Goat), a film centering around the story of two high school students, Cho Min-sik (Park Jin-young) and Yang Ye-joo (Ji Woo), whose lives are slowly intertwined. The film begins with Min-sik and his family moving to the small town of Suyang-Li where Min-sik finds himself getting caught up in the local drama. On the very first day of school, Min-sik’s attention is drawn to Ye-joo, a lonely girl who is bullied and tormented by her classmates because of the fact that her father is an accused murderer. Although we never find out if her father is truly guilty or not, nearly everyone in town is convinced of his guilt.

Although Min-sik is fairly quiet and reserved, he quickly falls in with a group of rough boys in his class who, among their other delinquent hobbies, find amusement in making Ye-joo’s life more difficult. He finds himself unwillingly interacting with Ye-joo because of a friend’s dare, and after sharing a meal with Ye-joo and her father, Yang Sang-man (Jang Myung-gap), Min-sik begins to see her in a different, less prejudiced light. As the film progresses, they grow closer through raising a stray goat Min-sik found in the forest, and find in each other a true friend.

The following review contains spoilers and references to sexual assault.

The lessons the film hopes to promote come from the film’s complex juxtaposition of innocence and guilt throughout the unraveling of Min-sik and Ye-joo’s story. The interplay of these ideas help us grasp a better understanding of the complexities that exist in individuals and society overall. The strongest instances of innocence and guilt appearing throughout Nunbal are in the characters of Ye-joo and Min-sik. 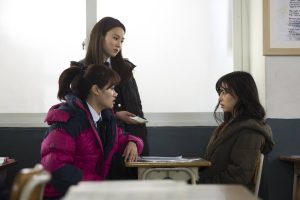 Ye-joo is the purest definition of an innocent – she has done absolutely nothing wrong and yet suffers anyway. Even though her father is a legal innocent, as he has not been formally convicted, this does not stop the townspeople from punishing Ye-joo for something she had nothing to do with. Ye-joo suffers through her classmate’s taunts in silence, never raising a hand or saying a word in her own defense. This only further emphasizes the fact that Ye-joo is an innocent; she never initiates or prolongs conflict. Ye-joo’s ordeal is worsened by how no one stands up for her, not even the teachers in school or the local church leaders who are usually expected to be more objective and supportive of those in need of help.

Ye-joo is trapped in her position of an outcast, which is further pointed out in a key moment of dialogue between Min-sik and Ye-joo when her school uniform is ruined by bullies. After Ye-joo returns from attempting to clean herself off in the bathroom, Min-sik asks her, “The stain… did you wash it?” to which Ye-joo replies, “I can’t rinse it off.” This is a clear metaphor for the way her father’s supposed crimes have permanently marred Ye-joo’s reputation and how she is unable to cleanse herself of it, no matter how she tries.

The stray goat also plays an important part in the development of Ye-joo’s character as there are clear parallels between the two. Min-sik first finds the goat trapped in the forest and, feeling a rush of tenderness towards it, begins to visit it often to slowly nurse it back to health. Similarly, Min-sik offers Ye-joo hope and companionship for the first time and gifts her with lip balm that heals her physical wounds even as his friendship heals her emotional ones. 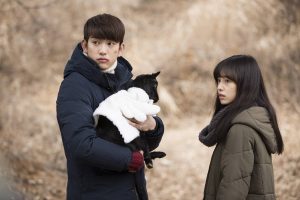 The parallels continue as Min-sik and Ye-joo work on raising it together, while the pair also develop and deepen their own relationship. Tragically, just as Min-sik is unable to bring the money to buy the goat off the owner in time, he is too late to save Ye-joo from being raped by the same owner while they wait for Min-sik’s arrival. This mirroring of the goat and Ye-joo’s fates is vital to the film as together they represent the innocents of society.

While Ye-joo represents the clearest form of innocence in the movie, Min-sik provides the most heart-wrenching form of guilt. To fully understand Min-sik, it’s important to focus on his journey throughout the movie. When he first moves to Suyang-Li, Min-sik is reserved and easily bends to his classmates’ peer pressure, going against his own moral conscience to participate in clearly reprehensible acts such as attempting to rob an old man’s store. Although it’s easy to judge Min-sik for caving in to his friends’ pressure, it’s difficult and unfair to place ourselves on the moral high ground when we have never been in his exact position. Everyone likes to believe that they would be the hero and stand up for what’s right, but more often than not, people become bystanders and allow injustices to continue. By reflecting on this harsh truth and actively working to become a little more understanding of people’s complexities, the film suggests, we can take a step in improving ourselves, if only by a little bit. 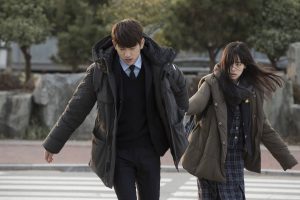 Despite Min-sik’s rocky start in Suyang-Li, he slowly begins to break away from his friends’ mindset as the film progresses. Glimpses of his more tender and thoughtful side are exposed as he begins to reconsider his attitude toward Ye-joo and her father. Arguably, the most important turning point of the movie is when Min-sik finally stands up to his “friends” and intervenes when they are harassing Ye-joo. He shines in this scene, showing the most courage and strength he has shown throughout the film, but even then he is not a typical hero. Instead of successfully standing up for Ye-joo and getting her bullies to flee the scene, Min-sik only succeeds in redirecting their anger at himself and gets beaten by the group. Undoubtedly, it was a noble act to stand up for Ye-joo, but this scene serves to emphasize the point that Min-sik is not able to win every battle. The bullies don’t stop just because Min-sik stood up to them.

One of the most tragic and complex scenes of the movie comes near the end of the film when Min-sik finds Ye-joo after she has been raped by the goat’s owner. Shocked and horrified at the scene before him, Min-sik is unable to comprehend what has happened in his absence and acts on his fight-or-flight response by turning on his heel and sprinting away from the scene. Unsurprisingly, his flight from the scene leads to Min-sik feeling a lot of guilt over his actions as he regrets his moment of fear and weakness. 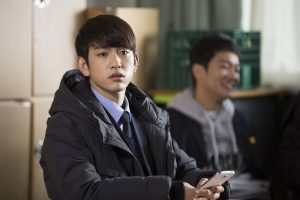 This scene understandably shocked and frustrated many viewers who felt that Min-sik should have stayed and helped Ye-joo and perhaps should have even attacked her rapist. As Min-sik was able to stand up for Ye-joo against her bullies and even get into a physical fight for her, it was even more disappointing to see Min-sik let his fear take over and run from the scene. His experience with being bullied and beaten the last time he stood up for Ye-joo may have also influenced Min-sik’s instinct to flee as he had been practically helpless the last time he attempted to face down Ye-joo’s aggressors.

Despite Min-sik’s weakness, I don’t really believe we’re meant to hate him. He is supposed to represent the average person – a person with both strength and weakness, consistency and contradictions. The reason many viewers feel so disappointed with the movie is because it does not offer a happy ending; Min-sik does not fulfill the role of the stereotypical film hero who is able to arrive just in time and conquer his own weakness to save the girl he loves. While it was immensely frustrating and heart-breaking to watch, I found Min-sik’s actions understandable and empathized with his panic. 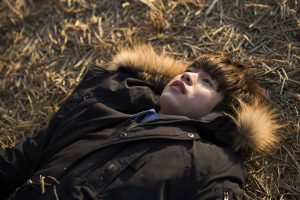 But the importance of the various scenes highlighting Min-sik’s strengths and weaknesses is that the sum of good and bad present in Min-sik make him human. And the fact that Min-sik was guilty of abandoning Ye-joo when she needed his help the most does not ultimately strip him of his innocence. It was not Min-sik’s fault that Ye-joo was cornered into such a terrible situation. It was the fault of her classmates who thoughtlessly ostracized her, her teachers and community leaders who did not care enough to help her, the bystanders who never spoke a word in her defense, and ultimately the fault of the goat’s owner who took advantage of a helpless young girl. Min-sik was truly trying his best to get to Ye-joo as fast as possible that day, all to save the goat that meant the world to Ye-joo, and one moment of weakness does not brand him as guilty of some unforgivable wrongdoing. At the end of the day, the blame lies squarely on the rest of the community’s shoulders.

The community that should have been a source of support and guidance for Ye-joo turned their backs on her, leaving a young girl vulnerable and defenseless. Innocent people like her are made to suffer for no good reason and mindless conformity leads to thoughtless judgments and attitudes that consign individuals to miserable existences as social outcasts. Although Min-sik was able break free of society’s mold to understand and correct his previous wrongdoings, he is ultimately only one person. Min-sik alone cannot change the whole town’s mindset and force them to see their destructive treatment of Ye-joo. Standing up for Ye-joo only led to punishment and ostracization, rather than a change in society’s moral code. 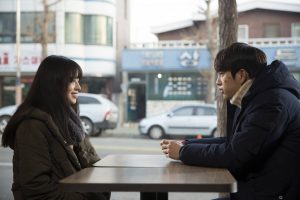 But even if society as a whole never changes, the film seems to suggest, it’s vital that individuals still try to do their best. Min-sik was not able to change others’ treatment of Ye-joo, but his own friendship greatly improved her life. Even if only a few people make an effort to be kind, their goodwill can make a world of difference in others’ lives.

We never find out what happens to Ye-joo or what becomes of Min-sik. Much of the past is also shrouded in mystery, as we never learn what Min-sik did in his old town to shame his family. This lack of certainty regarding the past and future emphasizes the importance of realizing that we don’t always know the full truth surrounding people, and that we shouldn’t be so quick to judge others when we have not been in their shoes.

Overall, Nunbal is a mature and complex film that presents an excellent depiction of the complexities of human nature through the story of Min-sik and Ye-joo in the hopes that we can be a little more understanding of each other and a little more self-aware regarding our own actions. It’s incredibly easy to never think twice about what we and everyone else believe, but this kind of mistake can ruin people’s lives, and being a bystander can be just as cruel as actively attacking a person. Nunbal leaves us with a lot to contemplate, and the hope that even one act of kindness can mean the world to someone else.