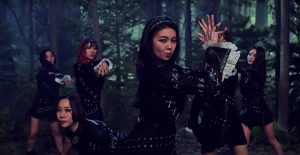 Remember the summer of 2014, when the Honey Butter Chip craze swept through South Korea? It was the year nobody expected an innocuous combination of honey and butter to be so successful as to spawn a cult following and countless imitation products.

While they’re no viral sensation, I’m feeling that same kind of head-turning surprise again, and following the energy of rallying fans as I continue to watch new artist Dreamcatcher. Their second single “Good Night” reinforces their unexpected reboot idea of arming a girl group with a heavy metal sound and gothic horror aesthetic – a delightful revelation for those of us long jaded by the promise of image change. It’s the arena in which K-pop excels at baiting its audience before disappointing them with more of the same, but the image Dreamcatcher has presented us with seems to be the Real Deal: a novel juxtaposition of cute and crude designed to take the web by storm.

In retrospect this concept is not particularly fresh, but simply late to K-pop. Dreamcatcher arguably follows in the footstep of Japanese trio Babymetal – one of the first Asian pop acts to gain notoriety for blending sugar with metallic spice – and takes plenty of musical cues from the pop-metal ballads of Evanescence. But in the end neither of these artists belong to the realm of K-pop, and Dreamcatcher is managing to carve its own niche in the field as it melds the catchiness of aggressive guitar riffs with synchronized dance performances.

“Good Night” pushes the group’s sound past the debut test waters of “Chase Me” to fully embrace the insistent, amplified electric guitar line that characterizes much of heavy metal. But if artists have traditionally used this genre as an outlet for their feelings of disenchantment and powerlessness, the genius of “Good Night” comes from writing lyrics that turn the sound of masculine angst into the sound of female control: 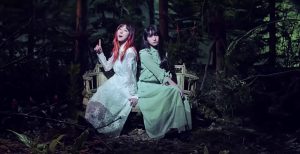 The guitars and drums backing these lyrics are not meant to signal hopeless rage, but menacing strength from a group of women. This idea is only enforced by the MV for “Good Night,” which continues the storyline of “Chase Me.” The girls of Dreamcatcher continue to play the role of otherworldly spirits toying with a trapped man. They watch him from afar, observing through a gilded mirror in order to steal a chained book he has that seems to carry information about the girls’ secrets.

It’s a dark but sumptuous journey as we watch Siyeon and Yoohyeon run through the forest, dressed in cream lace and mint tulle; blood-red candles illuminate shelves of leather-bound volumes and feather quills. A sinister music box tinkles as the girls form a procession, cloaked in gilded black hoods. This is not the typical look of heavy metal, but seeing the girls cast so dramatically against shadow and fire somehow makes it all work. Aesthetically, I’m most reminded of Sunmi’s “Full Moon,” which features a similar gothic setting and storyline involving a helplessly ensnared man. 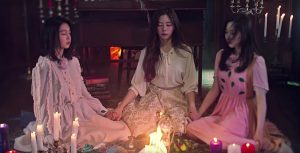 Essentially what Dreamcatcher has done in both storyline and sound is traverse against the currents of K-pop. There’s no hint of dance hall or hip hop swag with this group, nor any of the visual minimalism and bright color blocking that so many recent MVs have lazily defaulted to abusing. But we have been able to receive a holistic understanding of where Dreamcatcher is going as it reimagines heavy metal for K-pop, casting a wider net for the niche genre through its lighter, more feminine image. And so as far I’m concerned, no new artist in 2017 has yet to open with as strong of a run as “Chase Me” and “Good Night.” I’ll be looking forward to the last single of this supposed trilogy with high expectations, eager to see how the story between this man and group of magical girls comes to a close.