MVP's "Take It" Fails To Impress 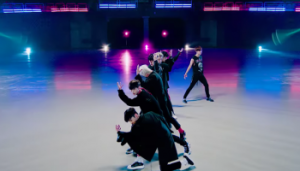 Another K-pop boy band has debuted, this time called MVP, from PH Entertainment. If nothing else, they are strong contenders for the “Most Un-Google-able Group Name” award. Their debut, “Take It”, is clearly pushing MVP’s image as a strong, badass  group dance, which might not have been the best idea.

Both the “Intro” and “Take It” MVs are focused heavily on showcasing MVP’s dancing skills. In fact, that’s the entirety of “Take It”: dancing in various sports-themed locations, with varying degrees of logic. Locker room for emotional posing? Totally logical. Empty arena? It’d be disappointing if they didn’t. Stylized stage that resembles an inverted medal? Sure, why not? Airport lounge and/or players club? Yeah, that one’s pretty jarring. Not only does it deviate from the pattern of the other sets, it deviates aesthetically as well — being a bright, blinding white in comparison to the darker, edgier lighting that matches both song and choreography far better.

Other than the perpetual “wait, what?” of the airport lounge, the real emphasis is on MVP’s dancing skills. The choreography is quite eye-catching. It’s very aggressive, filled with formation changes and peel-offs, paired with powerful steps, adding up to a harsh dominating performance. Or it should, but it doesn’t, and that’s all on the execution.

Look, I hate to be a pedantic ex-dancer, but. . . I’m a pedantic ex-dancer. MVP clearly knows the choreography, but they’re not performing it. There’s no commitment to the steps, no strength in the limbs. Everything is done accurately and in sync, but the it honestly looks like MVP is marking the routine rather that dancing full out and giving the choreography their everything. It sounds extremely petty, but the fact is the jump kick at the end of the intro wouldn’t scare my bunny slippers, let alone lead me to buy their image as skilled dancers or aggressive bad boys. 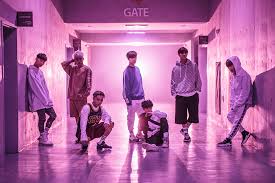 The song suffers from the same issue of being interesting in theory and parts, but failing in the final stretch. Musically, “Take It” pulls from glitch-hop, a fusion of the EDM genre glitch and hip hop. Glitch is based around sounds more than music; clicks, scratches, the sound of a CD skipping, audio distortion, etc. Weaving these distinctly non-musical sounds into something rhythmic  is the goal of glitch. Glitch hop marries that to the beats and techniques of early hip hop. As a result, “Take It” is a song throbbing with power. It’s intense and driving, filling the audience with energy.

However, the vocals seriously undercut the instrumentals. Glitch as a whole does not lend itself well to vocal performances, being a genre that places emphasis on rhythm and sound rather than harmony and melody. The vocal line is perfectly fine on its own, and MVP does a solid job with the delivery, but it wasn’t layered very well. The vocals are often drowning under the chaos of the production, an afterthought rather than the main attraction. The times the vocals do claw their way to the forefront do nothing to help, as the elements are so disparate they cancel each other out, resulting in a net musicality of zero.

“Take It” shows great potential, but only if MVP and PH Entertainment is able to carry things through the final leg of production. With more fine-tuning, “Take It” could have come together into something special; but as it is, the parts are far greater than the whole.